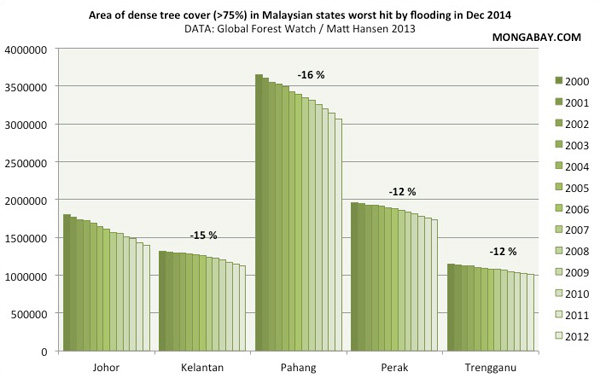 Five states hard hit by flooding last month in Malaysia had high rates of forest loss in recent years, bolstering assertions that environmental degradation may have worsened the disaster.

According to satellite data from researchers led by the University of Maryland’s Matt Hansen and displayed on Global Forest Watch, the states of Johor, Kelantan, Pahang, Perak, and Terengganu each lost more than 10 percent of their forest cover between 2001 and 2012. Loss was greatest in areas with dense tree cover.

Near-term data from Global Forest Watch shows the forest loss has continued since the end of 2012 in the states.

That data lends support to claims by local environmental groups that deforestation may have exacerbated flooding by accelerating runoff during heavy rainstorms. But the impacts may be even more widespread than indicated by deforestation data alone, since it doesn’t fully capture the extent of selective logging, which can degrade a forest’s ability to retain water, nor the reduced absorptive capacity of timber and oil palm plantations, which have less ground cover and root development than natural forests.

“Logging would usually result in erosion, causing mud to flow down from the highlands during rain, eroding hills and destroying water catchments and causing lowlands to become flooded,” Datuk Abdul Malek Yusof the president of Sahabat Alam Sekitar Malaysia (Friends of the Earth Malaysia), was quoted as saying by Malaysian state media.

“When trees are felled, it causes rain to flow down the soil instead of being absorbed into the earth by trees (and later slowly released into water catchments). This causes rainwater to flow down at a faster rate into the rivers. Rivers will not be able to contain such an amount of water in a short time, and this causes floods,” added Nithi Nesadurai, the president of the Environmental Protection Society of Malaysia. “Almost everyone is aware of the phenomenon, but no one gives it due attention.” 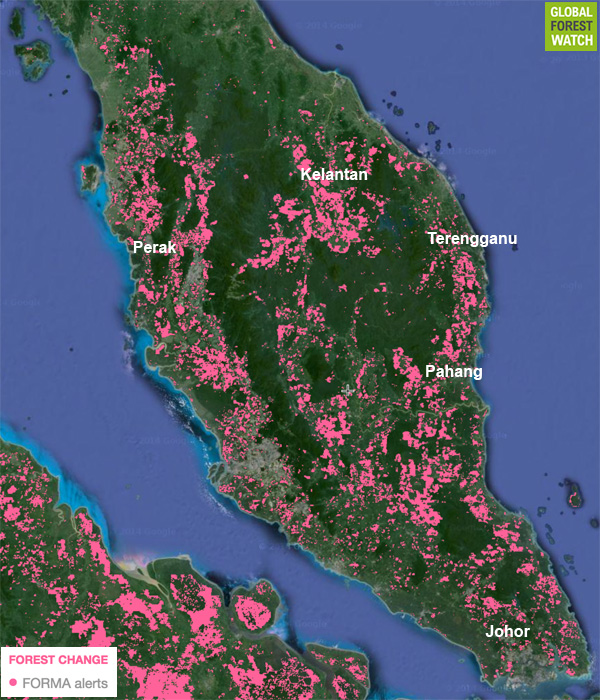 Close up on FORMA alerts since 2006 in the Kemaman area, which has been particularly hit by flooding.

Logging is widespread in Peninsula Malaysia. While much of it is sanctioned by state governments, it is often poorly regulated, leading to severe damage. Illegal logging and re-zoning natural forest concessions for conversion to plantations only add to the problem.

Flooding caused by heavy rains in the second half of December forced some 200,000 people to evacuate in several states in West Malaysia. Transportation was disrupted and some areas were cut off, forcing rescues by helicopters and boats. More than 20 people were killed.

Flooding also damaged large areas of downstream oil palm plantations, cutting palm oil production. According to the Malaysian Palm Oil Board, palm oil output dropped 22 percent in November, providing a temporary reprieve to the palm oil market which has been declining with other commodities in recent months.