Financial pledges for REDD+ slow to be disbursed, finds report 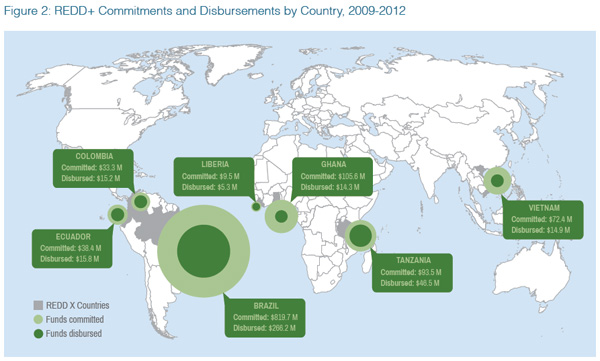 Only a small fraction of the $7.3 billion pledged under the Reducing Emissions from Deforestation and Degradation (REDD+) program has actually been disbursed, find a new report that tracked REDD+ finance in seven countries.

The REDD+ eXpenditures Tracking Initiative (REDDX) initiative, led by Forest Trends, analyzed REDD+ financial flows between 2009 and 2012 in Brazil, Colombia, Ecuador, Ghana, Liberia, Tanzania and Vietnam. It found that less than a third of $1.2 billion committed in those countries had been disbursed by the end of 2012.

However both commitments and disbursements grew steadily on a year-by-year basis during the study period. Nearly 80 percent of funds came from bilateral government donors, mostly from the governments of Norway and Germany which accounted for 91 percent of these contributions. Multilateral institutions like the World Bank and private foundations, which played critical early roles in getting REDD+ pilot initiatives off the ground, accounted for 11 percent and 5 percent respectively.

While the numbers are limited to the early days of the REDD+ program and don’t include the last two years of data, they are far below what the $15-30 billion a year the United Nations says is needed to substantially slow deforestation and forest degradation in the tropics. 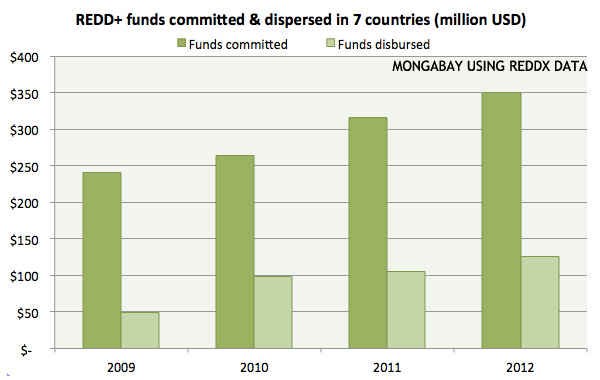 Forest Trends aims to further flesh out the data this year, adding seven more countries — The Democratic Republic of Congo, Ethiopia, Guyana, Indonesia, Mexico, Papua New Guinea, and Peru — to the tracking system. REDDX also endeavors to include project data to elucidate how REDD+ funds are being spent, whether its supporting efforts to secure forest communities’ land tenure, establishing protected areas, or developing alternative livelihoods to shift away from activities that drive forest diminishment. The tool could eventually help identify opportunities for conservation and bottlenecks in implementation as well as point out REDD+-backed activities that have perverse impacts on forests, biodiversity, or communities.