“Long ago, when animals were gente…”

Those words, uttered countless times by indigenous Amazonian storytellers, blur the boundary between humans and other creatures in the forests and rivers, revealing a different view of the way human and non-human worlds intertwine.

“You can’t talk about conservation without talking about enchanted lakes,” says Leonardo Tello Imaina, the director of Radio Ucamara in this river port town of Nauta in the northeastern Peruvian Amazon.

The son of a Kukama father and an Achuar mother, Tello was born on an island in the Marañón River that is gone now, washed away by the shifting waters. As a child, he listened to his father and others tell tales of the cochas encantadas—or enchanted lakes–where a greedy fisherman might vanish if he took too many fish. He also heard stories of places where someone who transgressed unwritten rules about hunting animals or gathering plants might be devoured by the buri buri, a two-faced monkey.

In villages along the Marañón River, many Kukama people still remember how their families were evicted from the huge wetland that became the Pacaya-Samiria Reserve. Sadness, resentment, and resignation tinge their words when they discuss it. Knowing that hunting and fishing are permitted in parts of the reserve does not compensate for the loss of their traditional lands.

It might have been different if conservationists had listened to the stories.

“Initiatives for protecting the environment are considered from a technical standpoint, which is what technical experts have studied. And it’s fine that they’ve studied it, but they make a serious mistake by excluding traditional ways of respecting nature,” Tello says. 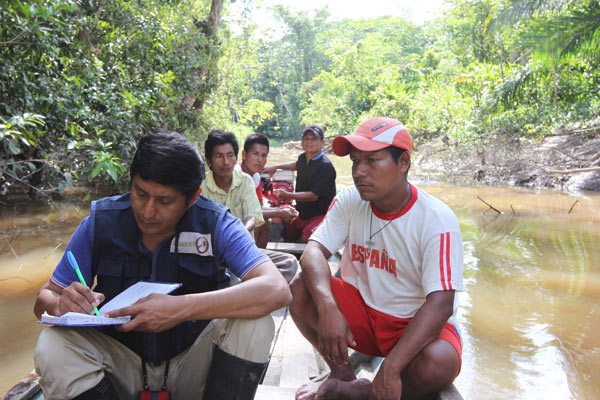 Kukama journalist Leonardo Tello conducts an interview while traveling by boat along a channel off the Marañón River in northeastern Peru. Photo by Barbara Fraser

Among those ways are the enchanted lakes—places where a fisherman is allowed to take as much as he needs for his family’s sustenance, but no more.

“They never tell you how much that is,” Tello says. “And you have to leave immediately afterward—you can’t stay too long in the enchanted lakes, because that would mean you’re greedy.”

If a fisherman overstays, the madre or spirit of the lake—which might take the form of a large boa, caiman or other animal—could swallow him and make him disappear forever.

While fishermen can make limited use of some enchanted places, other places, including salt licks and pools where animals congregate, are completely off limits.

“There is a series of stories, told by a father, who learned them from his father, and from them you learn that you shouldn’t go to those places,” says Tello, whose radio team has collected stories told by members of communities up and down the river. “It’s a way of establishing a relationship of respect in the way resources are used.”

And if it is impossible to pinpoint the precise location of an enchanted lake, that doesn’t matter.

“The important thing is the power of the story,” Tello explains. “It’s a way of transmitting rules about behaviors and attitudes, and norms for relationships between communities and places, like lakes, to ensure that there is abundance.”

Those traditional stories, however, are now under siege.

Unwritten rules began to break down a few decades ago, under the commercial onslaught of traders plying wares such as metal pots or machetes in exchange for bush meat, timber or fish. Indigenous people, who had traditionally hunted and fished for subsistence, became tempted by the commercial trade.

Still, environmental wisdom permeates those tales. And some conservationists have begun to listen.

When communities along the Ampiyacu, Apayacu, and Putumayo Rivers began working with the non-profit Instituto del Bien Común (IBC) to map places where they fished, hunted, and gathered other materials from the forest, they pointed to one area where they never ventured.

Deep in the territory that the communities sought to protect, it was the place inhabited by the madre of the animals. This is the spirit that protects the wild animals, allowing them to thrive and reproduce so game remains plentiful, according to IBC executive director Richard Chase Smith. 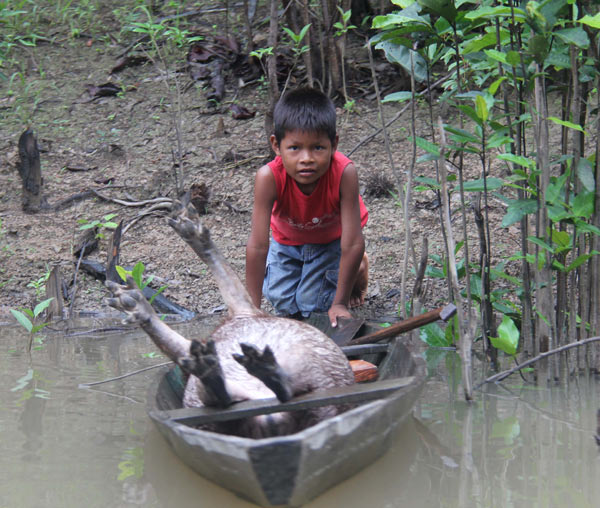 A young hunter returns home with his prey along the Ampiyacu River in Peru’s Loreto region. Photo by Barbara Fraser

Coincidentally, that area also surrounded the headwaters of several rivers. And when the Field Museum of Chicago did a rapid assessment of vertebrates in the area, it found the highest concentration of mammals right where the animals’ madre purportedly dwelled, Smith says.

As a result of those studies and the mapping, communities and the government designed a conservation plan for the area consisting of two regional conservation areas, where community members can hunt, fish, cut trees, and harvest palm fronds for their roofs, as long as they abide by management plans.

Spirit at the heart of the park

In the heart of the area, however, the communities have proposed the creation of a national park, the most highly restricted category in Peru’s national protected-area system. The park, which has yet to be officially designated, would protect the place where the madre of the animals resides. This would ensure that the river’s headwaters remain untouched by hunters, fishermen or development projects.

Tacana people in the lowland region of Bolivia’s department of La Paz tell of a similar place, a hilly area that hunters avoid. Anyone who gets too close is turned back by thunder and lightning, explains Constantino Nay, general manager of the tourism company operated by his community of San Miguel del Bala. 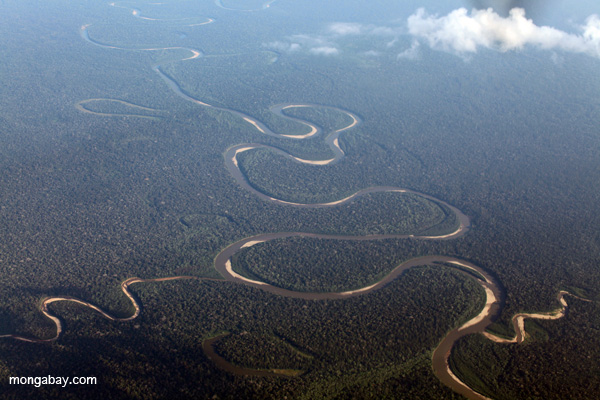 Among Kukama people, stories of enchanted lakes and other places off limits for hunting, gathering and fishing help keep resource use sustainable. Photo by Rhett A. Butler / mongabay.com

That area—which, like the one in Peru, protects the headwaters of rivers—became part of Madidi National Park, a small part of which overlaps the Tacanas’ land.

Nay recalls his mother maintaining a tally of the heads or tails of animals the family had eaten, as a way of keeping track of their diet. Although she probably would not have used the word, it was also a way of monitoring ecosystem health by evaluating the number and condition of the game animals, he notes.

In Bolivia, that tradition made it easier for people to accept restrictions on hunting and fishing imposed by the national park staff.

However, along Peru’s Marañón River where the Kukama were evicted from the Pacaya-Samiria reserve, resentments run deeper. If park planners had listened to the stories and sought local input on the reserve’s design, perhaps the outcome would have been different.

But in the people’s memory, at least, the enchanted lakes remain. 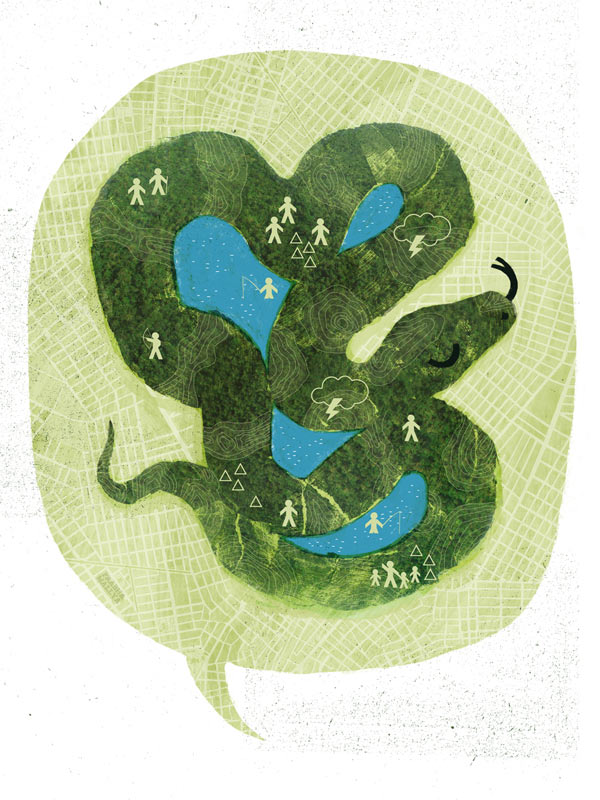 The ‘madre’ of the animals as a boa constrictor protecting the enchanted lakes. The boa is a key figure in the Kukama people’s creation myth – the boa gave birth to the first Kukama person. Original art by Prabha Mallya.