Changing California forests may help us prepare for the future

A new study published by the Proceedings of the National Academy of Sciences examines how California’s forests have changed since the 1930s–and, according to its authors, can help us understand how forests will respond to the changing global climate in the future.

Entitled “Twentieth-century shifts in forest structure in California: Denser forests, smaller trees, and increased dominance of oaks,” the study looked at tree abundance and size across the state of California and in several different ecoregions.

“We wanted to document what’s changed since the 1930s, and if there were climatic signals associated with those changes,” the study’s lead author, Dr. Patrick McIntyre of the University of California, Berkeley’s Department of Integrative Biology, told mongabay.com. 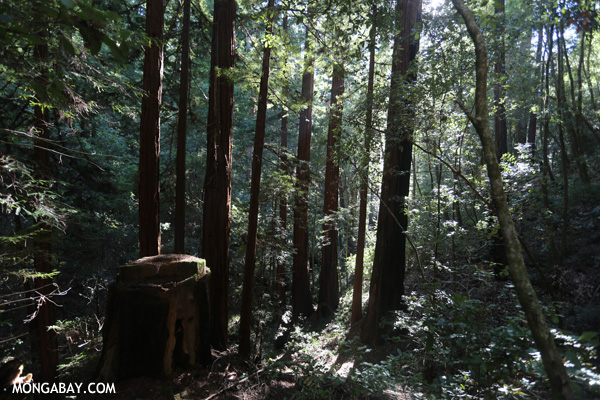 Specifically, McIntyre and his team wanted to determine if patterns that had been found in the forests of the Sierra Nevada and San Gabriel mountain ranges were characteristic of the entire state. So they set about comparing data collected by “forester” Albert Wieslander in the 1920s and 1930s to data collected by the U.S. Forest Service in the 2000s as part of its Forest Inventory and Analysis program.

What they found is pretty much what was expected given that California is in the midst of one of the most severe droughts ever recorded. There is indeed a general pattern across the entire state: large trees are in decline, and even though they are known to suffer disproportionate mortality rates in times of drought, the report describes the decline as “striking.” At the same time, the prevalence of small trees is increasing, which is usually attributed to fire suppression efforts and human exploitation of forests.

But McIntyre said some of the findings were not entirely expected. “What was somewhat surprising is that we detected a signal that the steepest declines in large trees were in areas where our models suggest that water stress for plants has increased the most. This was surprising because many other factors, such as a long history of logging and human altered fire cycles, certainly contribute to forest changes in California in the last century.”

This is where the study’s findings could help us understand how forests will respond to climate change, McIntyre said. “The water stress signal potentially allows us to use models of water stress across the landscape to try and predict future changes.”

Another observation the researchers made was that over the last century there has been a marked shift toward dominance of oaks versus pines in the forests of California, another pattern consistent with a warming world in which water stress is a fact of life.

“These findings suggest increased temperatures and changes in the timing and levels of water availability are contributing to large area changes in western North American forests,” the study concludes.

The biggest change, according to the paper, is in the Transverse and Peninsular mountain ranges of Southern California, which now have less than 30 percent the density of large trees that they had in the 1930s. The Sierra Nevada highlands, the Coast Ranges of southern and central California, and Northern California all had about 50 percent the density of large trees.

“Our findings suggest that understanding the dynamics of water availability and drought stress is important to understanding changes in forests,” McIntyre said. “It’s not just about the amount of rainfall, but factors such as how much water the soil can hold, at what time of year the snowpack melts, and if water is around when conditions are right for trees to grow.

“Better understanding of these factors can help us model and predict future changes.” 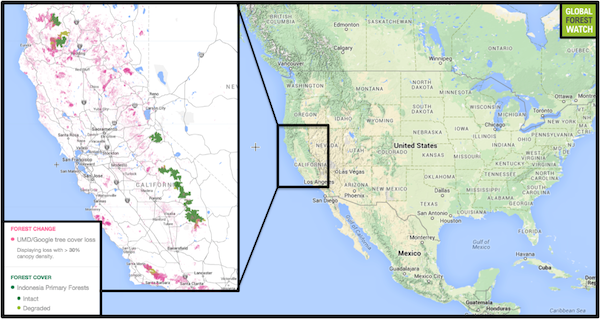 According to Global Forest Watch, California lost 10 percent of its tree cover between 2001 and 2012, and has few large areas of intact forest left. Click to enlarge.