Poacher’s toll: South Africa’s rhino population may be declining for the first time in 100 years 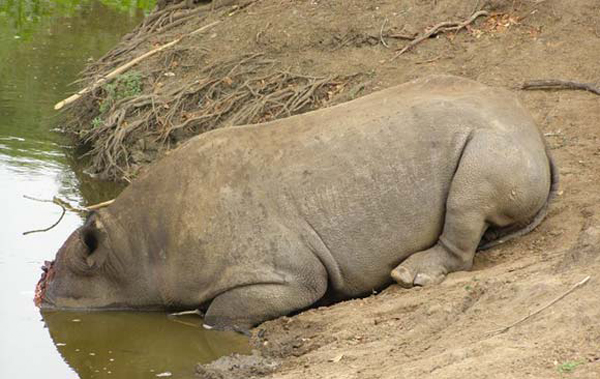 1,215: that’s the total number of rhinos butchered last year in South Africa for their horns. The number represents another annual record—the seventh in a row—topping last year’s total by 195 rhinos. South Africa houses the bulk of the world’s rhinos (around 80 percent) and, as such, is center of the illegal poaching trade, which began escalating in 2008 after years of reprieve. The situation has become so bad that experts say South Africa’s rhino population may be on the decline for the first time in a century.

Rhinos, worldwide, are targeted for their horns, which are believed to be medicinal in some Asian countries, even as scientific research has proven that rhino horn has no curative benefits. But the trade is now so lucrative that some individuals are willing to risk their lives to kill a rhino for a horn worth more on the black market than gold by weight.

Poachers are using increasingly sophisticated equipment as well, including night vision goggles and long-range weapons. In most cases, poachers shoot a rhino and then saw off its horn, sometimes along with its whole face—and often while the animal is still alive. The rhinos are then left to bleed to death.

Two thirds of the rhinos poached in South Africa last year—827 individuals—were killed in Kruger National Park, a sprawling, world famous protected area that’s nearly the size of Israel. The park borders Mozambique, which has allowed poachers from that country to cross the border, kill a rhino, and recross it with their illegal haul all in one night.

New efforts to tackle the crisis in South Africa have included moving over 100 rhinos outside of poaching hotspots to securer areas, including outside countries. For security reasons, South Africa won’t say where. But Molewa said “we aim to create rhino strongholds, areas where rhino can be cost-effectively produced.”

Still, South Africa has come under criticism for not doing enough to tackle its worsening rhino crisis, along with consuming nations like Vietnam and China.

“The lack of strong political will and active leadership from the [South African] government, neighboring Mozambique, and key Asian countries remains a serious impediment to turning this crisis situation around,” said David Newton, the director of the East and Southern African branch of TRAFFIC, an anti-wildlife trade group.

TRAFFIC noted that corruption, judicial delays in prosecution, and internal government bickering were exacerbating the crisis in South Africa. Moreover, the South African government has sent mixed signals, according to the NGO, especially by not attending an wildlife trafficking meeting last year in London and skipping out on signing the so-called “London Declaration” that came out of the meeting. A follow-up meeting will be held in Kasane, Botswana in March.

Solutions to the crisis are many, but complicated, according to experts. Some experts have focused on increasing enforcement with near-militarization of some rhino areas; others have called for stiffer penalties and quicker prosecutions for those caught poaching; while many have said consumer demand in East Asia must be dealt with. More controversial ideas include legalizing the rhino horn trade, which would allow managers to remove rhino horns—without killing the animal—and sell them. But most conservationists say this would only fuel the fire.

“Enforcement is crucial to reducing the number of killings, so that poaching is seen as a serious crime with serious consequences,” Lewis said. “That means upping jail sentences and increasing political and monetary support for enforcement activities. In parallel, we need to rapidly curb consumer demand in Asia for rhino horn products—or this problem will only get worse in line with a growing Asian middle class.”

He added that, “Community involvement is key to the long-term survival of rhinos, and we must continue to make efforts to find tangible incentives that allow communities to benefit from conservation.” For example, countries like Namibia have had major successes with home-grown programs that heavily involve local communities, including providing jobs and income from rhinos.