What happened to Egypt’s Serengeti-like ecosystem? Art helps scientists unravel the past 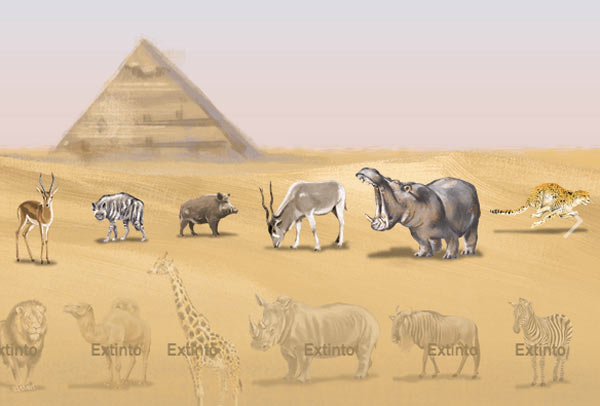 The scientists found that major disappearances coincided with climate and environmental changes. Click here to see a Brazilian interactive graphic of the extinctions. Graphic by: William Mariotto and Vinicius Sueiro, Estadao.

Life in modern Egypt clings to the Nile River. This crowded green strip within the desert supports more than 2,300 people per square kilometer (6,000 per square mile). That doesn’t leave much room for wildlife. Jackals, foxes, hyenas, ibex, and a few other large mammal species manage to eke out an existence. But 6,000 years ago, all of Egypt was green and vibrant, teeming with life much like the current Serengeti. Over time, this rich ecosystem fell apart.

Although the individual extinctions in this decimation are lost to history, a new study in the Proceedings of the National Academy of Sciences constructs a model of the web of interactions among the mammals across the millennia.

“You oftentimes see before and after, but in this case, you could watch what happened historically,” paleoecologist Paul Koch, of the University of California, Santa Cruz, one of the study authors, told mongabay.com. “We don’t often get to see, in detail, something collapse.”

To build the model, the scientists didn’t look to bones and fossils; rather, they looked to art. Specifically, they examined the detailed paintings and carvings of wildlife on ancient Egyptian vases, furniture, and walls. In fact, a visit to a Tutankhamen exhibition in San Francisco by Justin Yeakel, the study’s main author, and co-author Nathaniel Dominy sparked the initial idea for the research.

“We were struck by the accuracy and detail of these organisms that we knew no longer existed in Egypt today,” Yeakel said in an interview with mongabay.com.

The earliest pieces, dated by archaeologists to 6,000 years ago, depicted 38 large mammal species including giraffes, lions, elephants and hippopotami. A thousand years later, as the climate began to shift from humid to arid, animals began to vanish from the artworks. Two other large sets of disappearances matched further climatic shifts about 4,200 and 3,000 years ago. Today’s desert ecosystem was the outcome.

“That’s all correlational, but it’s suggestive that these big climate changes may have had a large impact,” said Yeakel, now at the Santa Fe Institute in New Mexico. A fourth massive extinction occurred about 150 years ago as Egypt began to industrialize.

Beyond matching the paleontological and historical records, the model describes a web of interactions among the animals, especially ties between predator and prey. Early on, the web had many strands. When zebras went extinct, the lions and leopards could switch to hunting gazelles or oryx. But with each extinction, predators were left with fewer alternatives for dinner. In time, major parts of the web collapsed.

The artworks don’t reveal the size of each animal population or the order in which they disappeared. This prevents the authors from theorizing about causes and effects of any specific extinction. Still, wildlife ecologist Justin Brashares of the University of California, Berkeley, who was not involved with the study, thinks the model is useful to recreate the early structures of the ecosystems.

“It offers a blueprint for forecasting the decline of ecosystems in the future,” he told mongabay.com.

The extinction patterns were not random. Initially, herd animals disappeared, leaving the carnivores largely untouched. But this predator-heavy mix destabilized the web further, making it more susceptible to climate change and other stresses. Closer to the present day, the ecosystem’s key animals were small-to-midsize herbivores, like gazelles, probably because of their critical role as food for the carnivores.

For Koch, the way the ecosystem fell apart was surprising.

“It was persisting, but it kept getting smacked,” he said. “And the last few centuries have been so dramatically bad.” 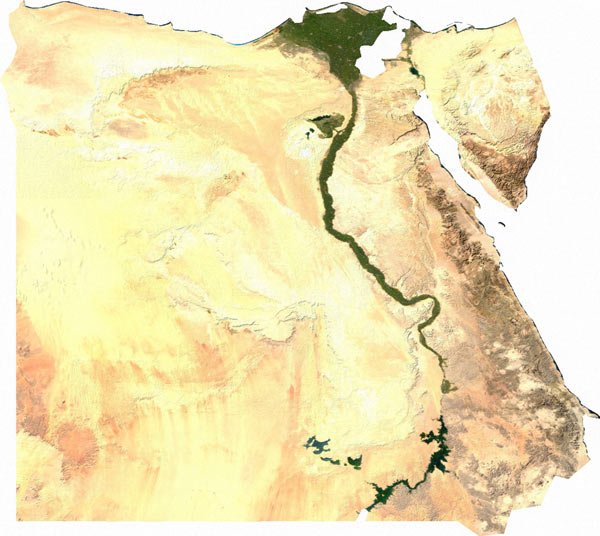 The human-inhabited area of Egypt takes up just 3.5 percent of the country’s total land. Beyond the Nile delta only the hardiest of desert animals survive. Image by: Wikipedia Commons.

Kim Smuga-Otto is a graduate student in the Science Communication Program at the University of California, Santa Cruz.