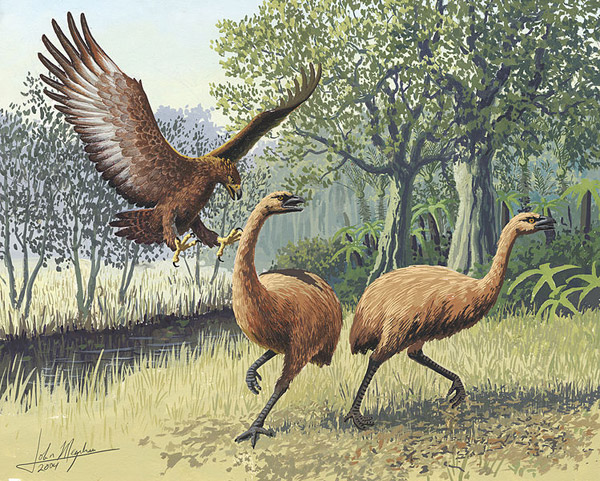 A Haast’s eagle divebombing a pair of moas. A new study finds that it only took a few thousand people to kill off the nine species of moas found on New Zealand, an act which also led to the extinction of their only predator, the Haast’s eagle. Image by: John Megahan/Creative Commons 2.5.

The first settlers of New Zealand killed off nine species of giant birds, known as moas, with a population no bigger than a few thousand people, according to new research published in Nature Communications. The biggest moas stood up to 3.6 meters (12 feet) tall, making these mega-birds the largest animals in the country and contenders for the biggest birds ever.

To determine how many people it took to push the moas over the edge, the scientists started by deciphering when Polynesians first arrived on the island and began eating moa, both by hunting and stealing eggs. To do this, they conducted 93 high-precision radiocarbon dating on moa eggshells from Wairau Bar on the South Island. Experts believe this river bar was the site of the first settlement in all of New Zealand. The radiocarbon dating showed that egg stealing began within a few decades of settlement, shortly after 1300 AD.

“The analyses showed that the sites were all first occupied—and the people began eating moa—after the major Kaharoa eruption of Mt Tarawera of about 1314 CE,” explained lead author Chris Jacomb with the University of Otago.

Within less than 150 years, the moas were obliterated. According to radiocarbon dating of moa bones, the nine species likely vanished entirely by 1435 at the latest. But they were rare decades before this, and had already vanished from many areas of the country. Their last stand was probably in the Nelson Mountains.

But how many people were on the island at the time of this mass extinction?

Using population models, the authors estimated that the founding population on New Zealand was only around 400 people. By the time the moas were driven to total extinction, the population was at most only 2,500. But at the hey-day of moa hunting—before the species became rare and isolated—the population was only 1,500 people. This represents a density of just one person for 100 square kilometers. Today there’s not a country on Earth with a population density so small.

While these findings shed light on the rapid decline and end of the moa, they are also important for counteracting an argument that a small group of people would have been incapable of wiping out megafauna species. Such arguments are commonly made by scientists who believe climate change or other impacts were responsible for the so-called Quaternary extinction event, which saw big animals vanish across many of the world continents, from mastodons in North America to giant lizards in Australia to rhinos in Europe. But more and more research is pointing to humans as the primary drivers of this extinction event.

This new study compliments research from earlier in the year that put the extinction of the moas squarely on the shoulders of human. The researchers here used genetic material from bones to show that moa populations were genetically healthy when humans arrived, countering arguments that the giant birds were already in decline by the time people showed up on the scene. 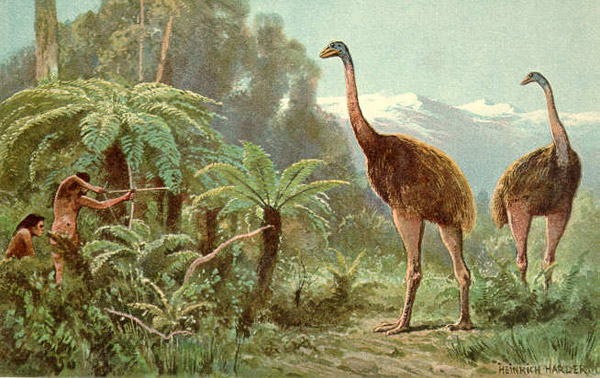 A reimagined scene of indigenous people hunting the biggest moas. Scientists now believe moas would not have frequently walked with their heads upright and the Maori did not have bows and arrows. Painting by: Heinrich Harder/early 20th Century.

“You see heaps and heaps of the birds’ bones in archaeological sites,” lead author of this paper, Morten Allentoft with the University of Copenhagen, told Science News in March. “If you hunt animals at all their life stages, they will never have a chance.”

Moas weren’t the only animals killed off during the first wave of human colonization on the islands. The Haast’s eagle (Harpagornis moorei), believed to be one of the heaviest raptors on Earth, is thought to have been the only major predator of moas until humans arrived. The species went extinct when its prey vanished. Over a dozen of other birds vanished around the same time, including giant New Zealand geese, which were also likely hunted to extinction by the new dominant biped on the islands.

In killing off the moas, early humans wiped out an entire Order of life, the Dinornithiformes. 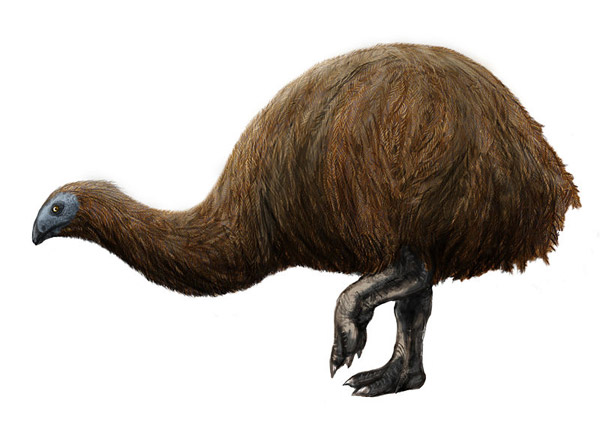 A modern artist’s rendition of the coastal moa (Euryapteryx curtus). Image by: Michael B. H./Creative Commons 3.0.

(03/17/2014) Moas were a diverse group of flightless birds that ruled over New Zealand up to the arrival of humans, the biggest of these mega-birds stood around 3.5 meters (12 feet) with outstretched neck. While the whole moa family—comprised of nine species—vanished shortly after the arrival of people on New Zealand in the 13th Century, scientists have long debated why the big birds went extinct. Some theories contend that the birds were already in decline due to environmental changes or volcanic activity before humans first stepped on New Zealand’s beaches. But a study released today in the Proceedings of the National Academy of Sciences (PNAS) finds no evidence of said decline, instead pointing the finger squarely at us.

(08/18/2014) In a recent update of the IUCN Red List, scientists have identified 13 new bird species that have gone extinct since 1500. In total the list now finds that at least 140 bird species gone extinct in the past five hundred years, representing 1.3 percent of the world’s total known birds.

(07/29/2014) Scientists have added 361 new bird species to the IUCN Red List following a major taxonomic review of non-passerine birds, i.e. non-perching or non-songbirds. Worryingly, 87 of these new birds are threatened with extinction, a percentage nearly double the overall threatened percentage for all birds, which currently sits at 13 percent.