Severe droughts in southern Brazil may be linked to deforestation and degradation of Earth’s largest rainforest, argues a new report published by a Brazilian scientist.

Reviewing data from roughly 200 studies, Antonio Donato Nobre of Brazil’s National Institute for Space Research (INPE) warns that reducing deforestation will not be enough to restore the ecological function of the Amazon rainforest, which acts as a giant water pump that delivers precipitation across much of South America.

Brazilian cities in the southeastern part of the are currently suffering from a severe drought that has left agricultural areas parched, cut hydroelectric power generation, and drained reservoirs.

The Operational Land Imager on the Landsat 8 satellite acquired these two natural-color views of the Jaguari Reservoir in Brazil. The left image shows the area on August 3, 2014 (the most recent cloud-free view of Jaguari); the right image shows the same area on August 16, 2013, before the recent drought began. Jaguari is one of five reservoirs in the Cantareira System, which supplies water to roughly half of the people in the São Paulo metropolitan area. Images and caption courtesy of NASA Earth Observatory.

In his report, Nobre explains the role big forests like the Amazon play in driving regional weather patterns.

“The forest keeps moist air moving, which brings rain to the interior regions of the continent, thousands of miles distant from the ocean,” said Nobre, who is a proponent of the “biotic pump” theory that compares large rainforests to “flying rivers”.

“This is due to the innate ability to transfer large volumes of water from the soil to the atmosphere through tree transpiration,” Nobre writes, noting that compounds emitted from trees stimulate condensation of water vapor, driving cloud formation and rainfall. This phenomenon reduces atmospheric pressure above forests, pulling moist ocean air deep into interior areas, driving a positive feedback loop that usually ensures regular rainfall in the Amazon and beyond.

Nobre says the Amazon keeps southern South America much greener than areas at similar latitudes on other continents. He also notes that the Amazon’s moisture cuts hurricane activity along the Brazilian coast.

However deforestation, degradation, and fire can break the link, disrupting the great moisture pump that delivers moisture to the forest and carries it to other areas, according to Nobre.

“Deforestation can put all of these attributes of the forest at risk. Recognized climate models anticipate varying harmful effects of deforestation on climate, predictions that have been confirmed by observations. Among them are the drastic reduction in transpiration, changes in the dynamics of clouds and rains and prolonged dry season in deforested areas,” he states. “Other unanticipated effects, such as smoke and soot damage to the dynamics of rainfall, even in pristine forest areas, are also being observed.” 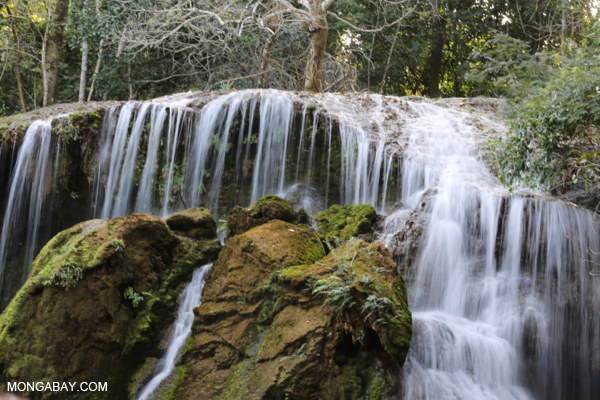 Nobre says there is a danger that continued deforestation and degradation could tip the Amazon biome from tropical rainforests to savanna. Such a cataclysm could undercut the biotic pump, leaving much of South America — including breadbaskets in Southern Brazil and Argentina — much drier. That in turn, could put much of the continent’s economic activity at risk.

To stave off that scenario, Nobre urges “the massive mobilization of people, resources and strategies” to reverse deforestation and degradation.

“In addition to maintaining Amazonian forest any cost we must confront the liability of accumulated deforestation and begin a comprehensive process of recovering what was destroyed, which in Brazil amounts to an area of 184 million football fields,” said Nobre, likening the effort needed to that of fighting a war.

“To address the seriousness of the situation, we need mobilization [on par] with a war effort, but not directed to conflict,” he writes. “Only a minority of the society has been and still is directly involved in the destruction of forests. And that minority is pushing the nation toward climate abyss.” 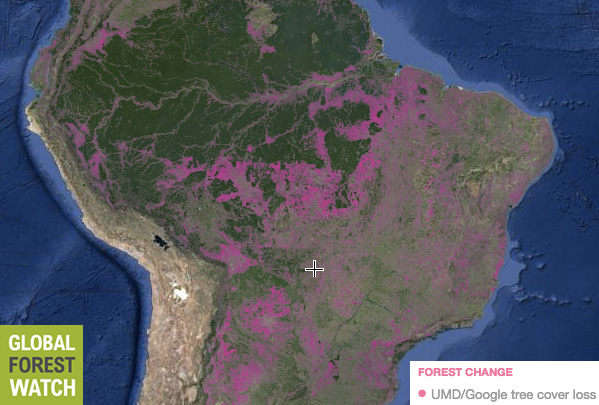 Global Forest Watch map showing forest loss in Brazil between 2001 and 2012. Overall the Brazilian Amazon has lost nearly 20 percent of its tree cover since 1970. A similar area has been degraded by drought, logging, and fire. Large areas of forest have also regrown..