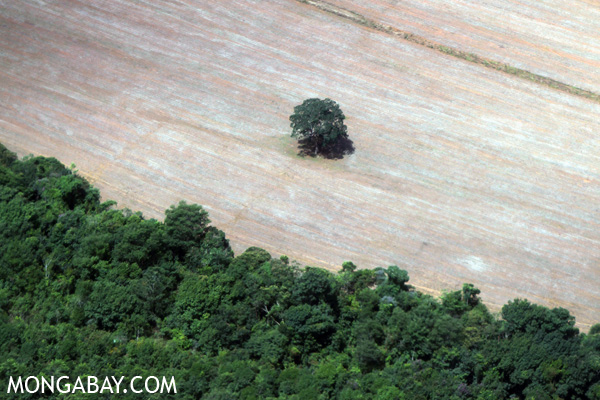 Lone Brazil nut tree standing in an area recently cleared for soy in the state of Mato Grosso, Brazil, in 2009. Photos by Rhett A. Butler

The Brazilian soy industry has extended its deforestation moratorium for another 18 months.

The moratorium, which was established in 2006 after a high-profile Greenpeace campaign, bars conversion of forests in Brazilian Amazon for soy production. Independent analysis has shown it to be highly effective — just prior to the moratorium, soy accounted for roughly a fifth of recent deforestation, while today its share is less than one percent.

The moratorium’s renewal had been in doubt. In January, the Brazilian Vegetable Oil Association (ABIOVE) and the Brazilian Grain Exporters Association (ANEC) said that 2014 would be the last year of the moratorium, asserting that the country’s recently revised Forest Code would be sufficient to restrain deforestation. Environmentalists balked at the decision.

But with deforestation in the region rising sharply in recent months — and several palm oil giants making zero deforestation commitments — pressure had been mounting on Brazilian soy companies to renew the moratorium. 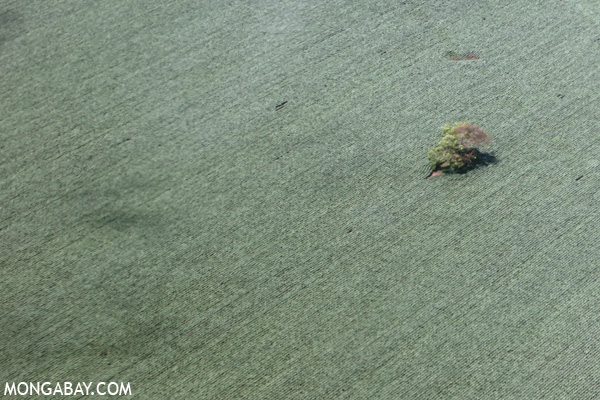 A rainforest tree standing amidst soy in the Brazilian Amazon.

“The announcement to renew the Soy Moratorium is a huge win, not only for tropical forest conservation, but also for wildlife habitat and biodiversity,” said Barbara Bramble, Senior Advisor for International Affairs at the National Wildlife Federation, in a statement.

“The Soy Moratorium is one of the most effective tools available to allow companies to confidently source deforestation-free commodities,” added Nathalie Walker, Bramble’s colleague at NWF. “Ending the Moratorium would have been a big step backwards at a time when Amazon deforestation is once again on the rise.” Paulo Adario, Senior Advisor for Greenpeace International, said the extension would give the industry and the Brazilian government time to strengthen policies to eliminate deforestation from the soy supply chain.

“The need to extend the Soya Moratorium is crystal clear. There is no other mechanism in place to keep deforestation from the Amazon out of the soy supply chain,” Adario said. “The extension of the moratorium for 18 months gives traders, producers and the Brazilian government enough time to ensure the production of agricultural commodities does not contribute to deforestation.”

The Brazilian Amazon contains the largest block of tropical rainforest in the world. The ecosystem plays a critical role in sequestering carbon and maintaining regional rainfall. It also houses the single biggest repository of biodiversity on Earth.

Yet agricultural expansion, logging, and fires are eroding the edges of the Amazon, while roads bisecting the forest multiply human impacts. New hydroelectric projects threaten to disrupt the lifeblood of the ecosystem: the Amazon River and its tributaries.

Deforestation in the Brazilian Amazon has plunged since 2004, but environmentalists fear that the trend could reverse after an uptick in clearing in 2013 and accelerating loss in 2014.

Brazilian government silent as deforestation rises in the Amazon

(10/23/2014) Four commodities produced in just eight countries are responsible for a third of the world’s forest loss, according to a new report. Those familiar with the long-standing effort to stop deforestation won’t be surprised by the commodities named: beef, palm oil, soy, and wood products (including timber and paper). Nor will they be very surprised by most of the countries: Brazil, Indonesia, and Malaysia.

China and Europe’s outsourcing of soy production impacts the Amazon

(08/14/2014) Soy consumption in China and Europe is having significant ecological impacts in the Brazilian state of Mato Grosso, finds a study published in Environmental Research Letters.

(08/05/2014) 94.9 percent of deforestation in the Brazilian Amazon occurs on land less than 5 kilometers from a road or navigable river, finds a new study published in the journal Biological Conservation.