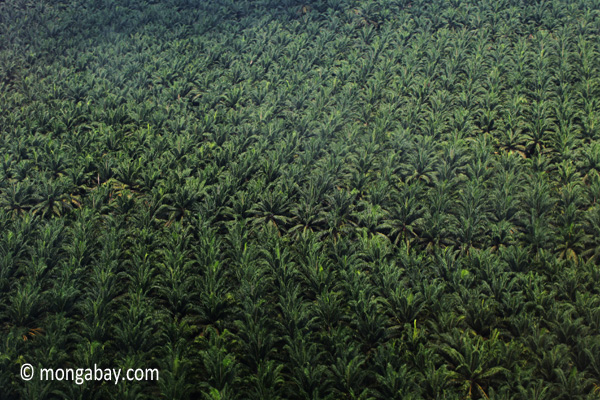 A law passed by the Indonesian government last month makes it even more difficult for palm oil companies to conserve tracts of wildlife-rich and carbon-dense forests within their concessions, potentially undermining these producers’ commitments to phase deforestation out of their supply chains, warns a new report published by Greenomics, an Indonesian environmental group.

The report focuses on the zero deforestation policy established in 2011 by Golden-Agri Resources (GAR), Indonesia s largest palm oil producer. It looks at how well that commitment is being implemented for a pilot project across eight concessions in West and Central Kalimantan, provinces in Indonesian Borneo.

Based on analysis of satellite imagery and government data, the study finds that GAR is effectively protecting high carbon stock (HCS) areas in seven of those concessions, all located in West Kalimantan. These ares amount to some 25,000 hectares (ha) of a total concession area of nearly 116,000 ha. 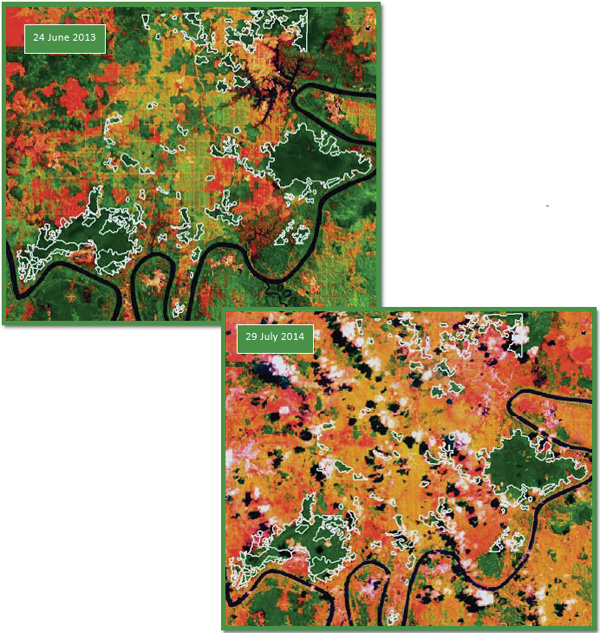 The 20,000 ha PT PGM concession in West Kalimantan has some 4,700 ha of HCS forest. Image courtesy of Greenomics.

“PT BAT – which operates one of GAR’s concessions in Central Kalimantan – occupies a concession area of nearly 14,000 hectares, of which more than 42%, or more than 5,800 hectares, consists of HCS forests. The Landsat 8 satellite image dated 1 June 2013 shows that there are blocks of HCS forests whose land cover has been opened up. These blocks range from small to relatively large in area, and they are being opened up at an increasing rate,” states the report.

“Unlike the other GAR palm oil concessions in West Kalimantan, it can be said that the HCS forests in the BAT concession in Central Kalimantan are not being properly protected.” 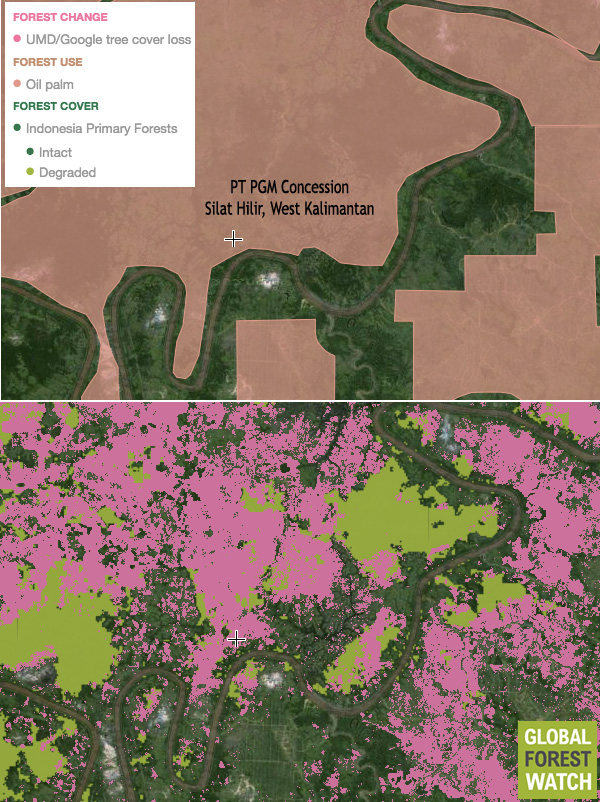 But while Greenomics concludes that GAR has overall been successful in conserving high carbon stock forests within its concessions, it warns that a new law may make those gains fleeting.

The problem is the lands GAR has set aside for conservation are classified as “plantable” by the Indonesian government. Under a September 29, 2014 revision to the Plantation Act, any area under a Hak Guna Usaha/HGU (Right of Cultivation) permit must be fully cleared and converted for its intended purpose within six years of the license being granted. If the land isn’t cultivated, it can then be seized by the state and turned over to an entity that will convert the area. Any company that fails to abide by the regulation is subject to fines and revocation of its business license.

In the case of GAR, that means there are no guarantees that areas set aside for conservation will be protected in the long-term. The government may take away those forests and re-grant the concessions to firms that don’t have zero deforestation commitments. GAR could even be reprimanded for its conservation efforts.

And any attempt to incorporate these areas into a nationwide moratorium on new forestry concessions will lack legal grounding because the moratorium applies only to new concessions, not existing ones, according to the report.

But all is not lost. The report notes there may be an opportunity within the new regulation to legally sanction conservation set asides.

The government will thus have to make a conscious effort to support private companies’ conservation initiatives. Or in other words, the government is part of the problem and therefore must be part of the solution.

“The new Indonesian government needs to put in place an adequate legal basis for plantation companies that wish to conserve HCS forests during the development of their palm oil plantations. In particular, the conservation of HCS forests must no longer be equated, from the legal perspective, with the neglect of land.”

Failing to do so will undermine zero deforestation commitments as well as Indonesia’s pledge to curb greenhouse gas emissions, the majority of which result from logging and conversion of peatlands and forests to plantations.