Earlier this week, the Brazilian government announced the declaration of a new federal reserve deep in the Amazon rainforest. The protections conferred by the move will ban deforestation, reduce carbon emissions, and help safeguard the area’s renowned wildlife.

The area is home to hundreds of species of animals, including 13 primate and 600 bird species. Of the area’s primates, several are considered threatened with extinction by the IUCN. The red-nosed saki (Chiropotes albinasus), is one of these. Listed as Endangered, the distinctive species needs large tracts of continuous forest, something that is becoming increasingly rare as deforestation fragments its range. One of the biggest threats to the saki is the development of roads into the area, which has brought with them an influx of soybean farms. This sort of activity will be forbidden in Alto Maues. 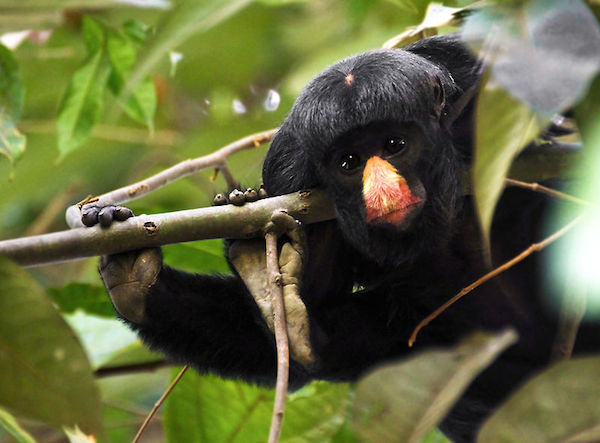 For conservation groups, the declaration of a reserve is a boon for area wildlife.

“This is essential to protect unique Amazon species, such as some types of primates,” Mauro Armelin, a WWF conservationist, told Reuters.

However, the creation of the reserve was not motivated entirely for habitat protection. It is actually part of Brazil’s climate policy. By granting federal protection to the area and thereby preventing large-scale clearing activities, the country hopes to reduce its greenhouse gas emissions. Unlike most other countries whose carbon emissions are due primarily to the burning of fossil fuels, Brazil’s largely comes from deforestation, which releases into the atmosphere carbon that had been locked up by trees.

Once the world’s biggest deforester, Brazil has made huge gains in reducing forest loss, with a 70 percent drop in deforestation recorded over the past decade–saving an area of forest roughly the size of Maine. A study published in Science earlier this year found this deforestation reduction prevented the release of about 3.2 billion tons of CO2 emissions – the equivalent of removing all cars in the U.S. for three years.

Yet, deforestation does still continue in Brazil, with Global Forest Watch data showing forest loss of more than 34 million hectares from 2001 through 2012 – or more than 6 percent of the country’s tree cover. The new Alto Maues reserve lies in the western state of Amazonas, at its border with Para. Together the two states lost more than 640,000 hectares of forest in 2012 alone. While the forest contained within Alto Maues has been untouched by human development, Global Forest Watch shows clearing encroaching into the area, with about 50,000 hectares lost in 2012 within a radius of about 150 kilometers (100 miles) from the new reserve.

While designation as a Protected Area does provide certain safeguards, it’s not an all-out guarantee. For instance, an Environmental Protection Area about 400 kilometers (240 miles) from Alto Maues lost 361,000 hectares of tree cover from 2001 through 2012, according to Global Forest watch.

The new Alto Maues federal reserve (yellow) encompasses some 668,000 hectares–larger than the U.S. state of Delaware. The area surrounding it has lost significant amounts of forest cover over the past decade. Map courtesy of Global Forest Watch. Click to enlarge. 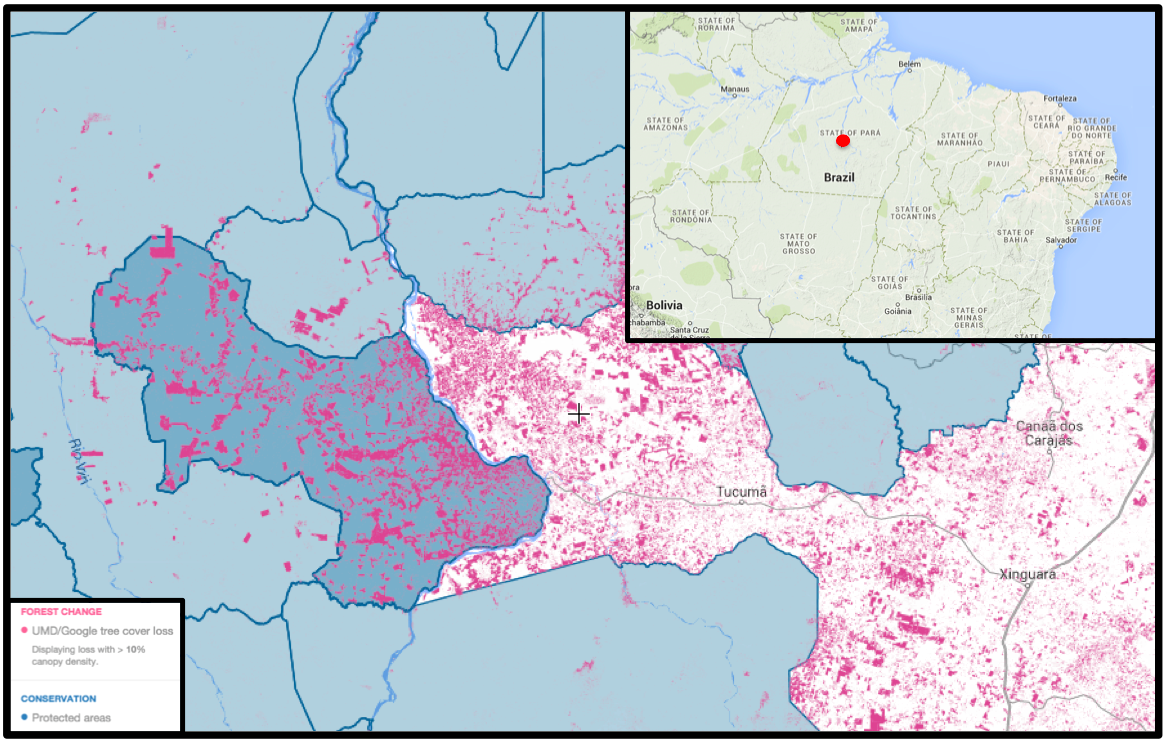 The Triunfo do Xingo Environmental Protection Area (dark blue) lost more than 360,000 hectares of tree cover from 2001 through 2012–representing more than 20 percent of its forests–despite its status as a Protected Area. Map courtesy of Global Forest Watch. Click to enlarge.

(10/22/2014) Gold mining is on the rise in the Guiana Shield, a geographic region of South America that holds one of the world’s largest undisturbed tract of rainforest. A new mapping technology using a radar and optical imaging combination has detected a significant increase in mining since 2000, threatening the region’s forests and water quality.

(10/15/2014) Every night empty trucks disappear into the Brazilian Amazon, they return laden with timber. This timber —illegally cut —makes its way to a sawmills that sell it abroad using fraudulent paperwork to export the ill-gotten gains as legit. These findings are the result of a daring and dangerous investigation by Greenpeace-Brazil.

(10/14/2014) Smallholder properties account for a rising proportion of overall deforestation in Brazilian Amazon, suggesting that Brazil’s progress in cutting forest loss through stricter law enforcement may be nearing the limits of its effectiveness, finds a new study published in the Proceedings of the National Academy of Sciences.

(10/09/2014) Cattle ranchers that drive the vast majority of forest clearing in the Brazilian Amazon are unlikely to be held at bay indefinitely unless they are afforded new incentives for keeping trees standing, argues new analysis published by an economic research group. The findings suggest that Brazil’s recent progress in reducing deforestation — annual forest loss in the region has dropped by roughly 80 percent since 2004 — could easily be reversed.

(09/26/2014) With an estimated population of 700 million individuals, domestic dogs are the most abundant carnivore in the world and are present everywhere that man has settled. Domestic dogs are not usually viewed as a huge threat to wildlife and native habitats, but according to a recent study dogs fit all three categories to be considered an invasive species and may be decimating mammals in agroforests in Brazil.

(09/24/2014) Although not always very wide, roads can be huge barriers to wildlife. Not only do roads break up habitats, making animal movement more difficult, but they also allow people into long-inaccessible natural areas. A new study in mongabay.com’s open-access journal Tropical Conservation Science looks at how drivers on Brazil’s MG-010 road act when faced with small animals, such as snakes, on the path.

(09/19/2014) Brazilian authorities have suspended the auction of the centerpiece of the massive Tapajos hydroelectric complex, reports Agencia Brasil.

(09/14/2014) A plan to build a dozen dams in the Tapajós river basin would drive the loss of an additional 950,000 hectares of rainforest by 2032 by spurring land speculation and mass migration to the region, suggests a new study published by Imazon, a Brazilian NGO.