by Morgan Erickson-Davis on 24 September 2014

Human pressures through tree clearing and poaching are reducing both forest and fauna in West Africa. In response to dwindling primate populations, a new study published this week in mongabay.com’s open-access journal Tropical Conservation Science used genetics techniques to examine their makeup and outlook – demonstrating the usefulness of such methods in the study of animals that are becoming ever-fewer in number and ever-harder to find.

Spanning more than 1,000 miles (1,600 kilometers) from Sierra Leone and Guinea in the west to Cameroon in the east, the lush Guinean Forests comprise West Africa’s biodiversity reservoir. In fact, they contain so many unique and threatened species, that Conservational International designated the entire region as a biodiversity hotspot. The Guinean Forests are divided into two broad areas – the Upper Guinean and the Lower Guinean – each with their own subset of distinct ecoregions that range from the Niger Delta swamp forests of Nigeria to the Guinean montane forests of Guinea, Sierra Leone, and Cote d’Ivoire. 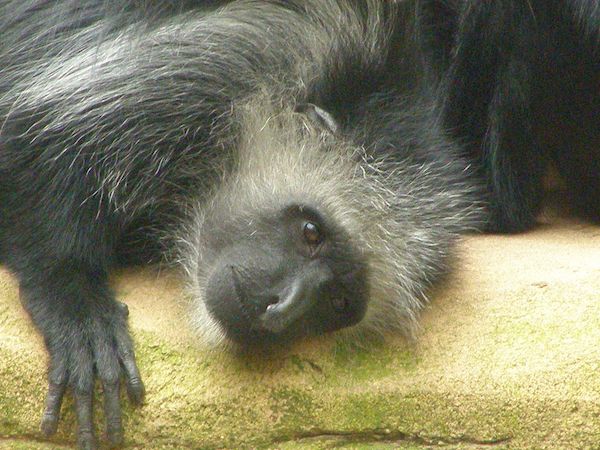 The king colobus (Colobus polykomos) is endemic to the Guinean Forests. Once widespread, it is currently listed by the IUCN as Vulnerable due to habitat loss and hunting. Photo by Frank Wouters.

As a whole, the Guinean Forests are home to nearly 30 species of monkeys and apes. Many species and subspecies are endemic to specific West African countries and are found nowhere else, including the Diana monkey (Cercopithecus diana), Miss Waldron’s red colobus (Procolobus badius waldroni), and the white-naped mangabey (Cercocebus atys lunulatus).

A study published in Nature in 2000 lists the Guinean Forests as one of the world’s 25 most threatened ecosystems. For primates, the biggest threats come in the form of hunting and habitat degradation as forest is converted to farmland and trees are felled for the timber industry. In Cote d’Ivoire, where the Guinean Forests cover about half the country, political and social instability has led to a decline in conservation policy, resulting in unfettered clearing. According to the forest monitoring site Global Forest Watch (GFW), Cote d’Ivoire lost nearly 1.5 million hectares of forest between 2001 and 2012—or about 5 percent of its remaining forest cover.

Cote d’Ivoire’s forest loss is a bit higher than the overall forest loss of the entirety of the Guinean Forest, which, according to GFW, amounted to approximately 3.5 percent between 2001 and 2012. However, much more damage occurred prior to that time, with very little pristine forest left at the turn of the 21st Century. Data from GFW shows most countries along the Guinean Forest range have no intact landscapes left, with the few that remain existing as isolated fragments in Liberia, Cote d’Ivoire, Nigeria, and Cameroon. Of those, about a third have been degraded since 2000.

The Guinean Forest, an expansive biodiversity hotspot indicated in dark blue, lost approximately 3.5 percent of its tree cover between 2001 and 2012, and is almost devoid of forest that has not been impacted by human activity. Map courtesy of Global Forest Watch. Click to enlarge.

According to the study published in Tropical Conservation Science and conducted by researchers at the Félix Houphouët Boigny University in Abidjan, Cote d’Ivoire, habitat destruction and hunting are threatening many primate species—as well as making them more difficult to study.

“This situation increases the threat to wildlife, and particularly primates, as they are particularly vulnerable to local extinction in fragmented landscapes,” the authors write. “Subject to intensive human pressure, remaining primate populations have low population densities, have secretive habitats, and are wary of humans. This can make field studies and direct observation difficult.”

Because of these challenges, the authors underline the need for cheap, reliable, and practical monitoring methods that don’t require researchers to actually locate the animals they’re studying. How? Through genetics and feces.

“[Feces] are abundant and probably the most collectable animal product in the wild, and may be acquired without disturbance to the study animals,” they write. “Analyses based on [fecal] DNA have been applied to a broad range of taxa to address questions from occupancy and food habits to abundances, species distribution, and habitat use.”

Prior studies demonstrated the efficacy of such methods in temperate areas, but few have been conducted in tropical regions where high humidity and temperatures can lead to quick decay of feces—and, thus, loss of the DNA scientists need for their research. However, the researchers of this study found such techniques are still useful for primate monitoring in the tropical Guinean Forests.

Through their fieldwork, they discovered several primate species may have been extirpated—or become locally extinct—from several areas in which they were once documented. This indicates population reductions, which may have dire consequences for species already in decline.

“At the local level, based on presence/absence data, we reported that Geoffroy’s black-and-white colobus (Colobus vellerosus) is critically endangered, whereas Diana monkey (C. diana), and King colobus (C. polykomos) are endangered due to the decline of their population size, their extent of occurrence and area of occupancy,” the authors write.

The study’s results also support prior research indicating possible hybridization between Geoffroy’s black-and-white colobus and King colobus at an area where their ranges overlap.

In addition to demonstrating that such genetic techniques are useful for primate study in tropical areas, the researchers isolated and used specific genetic sequences, called “primers,” that could be applied for future research.