But pull out some of your favorite items of clothing, check the label, and if you see Rayon, viscose, modal, or tencel among the fabrics it’s made of, you’re wearing a textile made from dissolving pulp. And that could mean you’re wearing forest destruction.

Wood fiber plantations have been encroaching on Indonesia’s rainforests for decades, with the majority of the pulp historically being used to make paper. But as the world continues to go digital, using less paper, and as the price of cotton bottoms out due to fears that global production is exceeding demand, companies have been looking for new markets for their pulp. Increasingly, they’re turning to dissolving pulp–which is having dire consequences for forests. 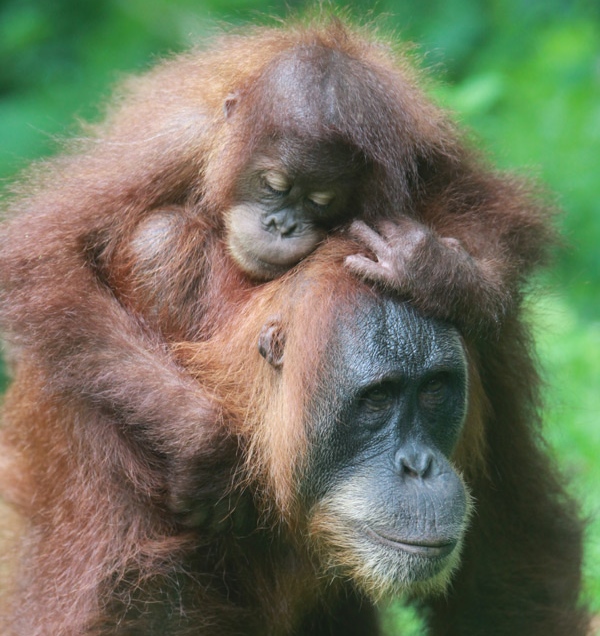 Proliferation of plantations has led to massive clearing of forests in Sumatra, reducing habitat for many threatened species such as critically endangered Sumatran orangutan (Pongo abelii). Photo by Rhett A. Butler.

Dissolving pulp is nothing new–in fact, the first Viscose Rayon was sold commercially in 1905. The process for making it requires several steps: After the trees are cut down and hauled to the mill, they’re pulped using a variety of toxic chemicals such as chlorine, phenol, and benzene compounds, with dioxin released as a byproduct. The result is a soluble compound that is called “dissolving pulp,” which is then sold to makers of textiles, who run it through spinnerets to create viscose staple fiber (VSF), which in turn is spun into yarn that can be woven into fabrics and used in clothing bearing name-brand labels like Prada, Abercrombie, and Louis Vuitton, to name just a few.

In North Sumatra, nearly 900,000 hectares of tree cover were lost between 2001 and 2012, according to Global Forest Watch (GFW). However, it is unclear how much of this is attributable to clearing of natural forests as GFW data also may also include the harvesting of already-established plantations. Still, the amount of forest displaced for plantation development is significant, with intact forest increasingly whittled into smaller and smaller fragments.

Dissolving pulp is sourced from wood fiber plantations that, together with palm oil and timber concessions, create a patchwork landscape of deforestation across central Sumatra. The little intact forest remains has shrunk during the past 13 years. Map courtesy of Global Forest Watch. Click to enlarge.

Clearing of tree cover both for and in plantations is primarily responsible for Sumatra’s approximately seven million hectares of tree cover loss between 2001 and 2012. Map courtesy of Global Forest Watch. Click to enlarge.

The wood fiber plantations of one company, Toba Pulp Lestari (TPL), have been increasingly used for producing dissolving pulp for use in textiles. In response, the environmental group Rainforest Action Network has launched a new campaign called “Out of Fashion” to highlight the connection between the fashion industry and forest destruction in Indonesia caused by companies like TPL that are supplying dissolving pulp to the global market.

Of course, as RAN highlights, the destruction of forests doesn’t happen in a vacuum, but brings with it a host of other problems, from habitat loss for wildlife to social conflicts with local communities and human rights violations.

“Pristine natural forests are being destroyed for monocrop plantations that are being made into fabric, impacting communities that have depended on those forests for generations,” RAN’s Brihannala Morgan told mongabay.com. “It’s destroying their livelihoods, polluting their rivers, poisoning their land. And all in the name of cheap clothing, which is something we need to take responsibility for.”

Indonesia is not the only country where forests are being converted into cheap clothing. The boreal forests of Canada and the Amazon in Brazil are also threatened by the increased production of dissolving pulp. According to Canopy, another environmental group seeking to sever the connection between the destruction of Indonesia’s rainforests and the clothes on your back, Indonesia, Canada, and Brazil supply some two-thirds of the dissolving pulp exported to China. As many as 70 million trees that are cut down every year find their way into textiles, and the amount of dissolving pulp being made for the global market is expected to double by 2050.

What’s worse, only 30 percent of a tree is ultimately used to make dissolving pulp. The rest—70 percent—is considered waste.

“Companies need to take responsibility for the products going into their fabrics,” says RAN’s Morgan, “and they need to ensure that there is no deforestation or human rights abuses in the clothing that they are selling.”

(09/17/2014) A group of palm oil and timber companies that have pledged to eliminate deforestation from their supply chains have agreed to establish a standard for determining what constitutes forest in terms of carbon storage.

(08/22/2014) Greenpeace Canada has filed a Statement of Defense in response to a $7 million lawsuit by Resolute Forest Products (NYSE:RFP) over allegations that the logging company destroyed forests in Quebec and Ontario.

(08/14/2014) Every year, thousands of hectares of Indonesian forest are illegally burned by development companies. However, Indonesia’s Minister of Environment, Balthasar Kambuaya, is optimistic that legal charges over such fires can be completed – even though he has just three months left in office.

(07/08/2014) Asia Pulp & Paper (APP) will not acquire companies that continue to destroy forests, according to a new procedure for association introduced by the Indonesian forestry giant. The procedure, developed after months of consultations with NGOs, effectively closes a loophole some environmentalists feared would allow APP to sidestep its zero deforestation commitment by acquiring companies that continued to clear forest after its February 5, 2013 deadline.

(06/17/2014) An Indonesian logging company says that clearing of peat forest on an island off Sumatra is ‘in line with its Sustainable Forest Management Policy’ because the area wasn’t found to be of high conservation value. In a letter responding to concerns raised by environmental groups, Asia Pacific Resources International Holdings Limited (APRIL) said its forest policy applies to all its concessions, including the Pulau Padang concession where Greenpeace documented deep peat clearance last month.

(06/17/2014) An alliance of more than 120 environmental and human rights organizations today announced a global push to transform the paper industry.