A slow loris in a venom pose. Photo by: Andrew Walmsley.

The bite of a slow loris can be painful, and sometimes even lethal. After all, this cute-looking YouTube sensation is the only known “venomous” primate in the world—a trait that might have strangely evolved to mimic spectacled cobras, according to a recent review paper.

Mimicry in mammals is rare. But anecdotal evidence and studies in the past have noted the uncanny cobra-like defensive postures, sounds, and gait in slow lorises. Among the first of these anecdotes was one written by John Still over a century ago in Sri Lanka.

One evening in 1905 as Still sat in his verandah reading, he heard “the regular breathing sound made by a cobra when he inflates and deflates his body.” Entering his room, he saw what he thought was the outline of a cobra with its hood expanded, threatening a cat that crouched about six feet away. A closer look revealed that the “cobra” was in fact his pet loris. The loris, with his arms and shoulders hunched up, was imitating a cobra, intermittently letting out a cobra-like hiss.

Examining this cobra-mimicking hypothesis, researchers note in their paper published in Journal of Venomous Animals and Toxins including Tropical Diseases last year, that when viewed from above, the dark stripe running along the back of a slow loris, together with its facial markings, can make it look like a spectacled cobra. Mimicking the venomous cobra’s sound and gait could have helped the little primate avoid predators common to both species.

But for this mimicry to be effective, predators of slow lorises would also have to be aware of the noxious nature of cobras. And this would mean that at some point in evolutionary history, the ranges of the loris (the mimic), the spectacled cobra (the model), and the predator that gets duped, would have overlapped.

Earliest fossil records of slow loris in Asia date back to eight million years ago. The cobras had migrated to Asia long before this. According to the authors, the slow loris mimicry could have evolved during a period of coexistence between the slow loris and the cobra, when some dramatic climatic changes acted as a trigger for selection of the mimicry.

As drier savanna landscapes replaced tropical forests during the climatic fluctuations, the tree canopy cover would have reduced, forcing the arboreal lorises to spend more time on ground, making them more vulnerable to predation. Mimicking a feared predator like the spectacled cobra would be a huge advantage in such an environment. Even today, their ranges overlap in some parts of Asia like India and Bangladesh.

But the cobra-mimicking hypothesis is just one possible explanation for the evolution of loris venom.

“Few people have ever researched loris venom, so few hypotheses have been generated,” lead author Anna Nekaris, Director of Little Fireface Project at Oxford Brookes University, told mongabay.com. “We are hoping that people would like to test the cobra hypothesis—it does have some scientific basis. But of course there are other hypotheses.”

One other hypothesis, for instance, suggests that venom in lorises could have evolved to deter and kill other lorises. While fighting, male lorises often lick their brachial glands near their elbows, and cover their face and mouth with its secretions. These glands harbor toxins that are chemically similar to allergens found in cat secretions. The bite of a loris containing its saliva mixed with the brachial gland secretions can result in often-fatal wounds in other lorises. 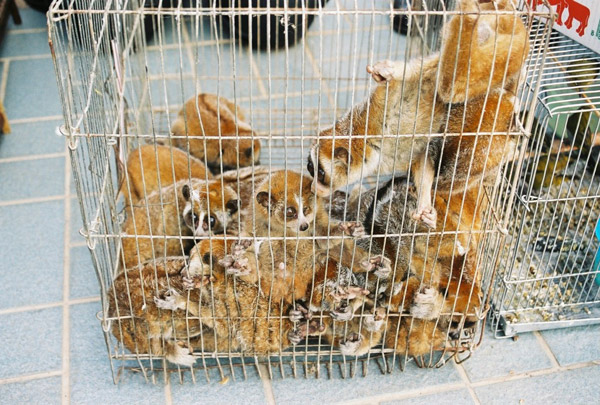 Slow lorises confiscated in Thailand in the illegal pet trade. Photo by: The Little Fireface Project.

“Perhaps the toxin began as a warning signal,” the authors write in the paper, “but over time, evolved into a true venom against other lorises, with the instant reaction of a loris to cover its head from an agonistic conspecific, as a reaction to protect its most vulnerable body part.”

The toxins, while potentially lethal, are not sufficient to protect the slow loris from the large illegal pet trade. YouTube videos especially have catapulted them into undesirable stardom. Even Lady Gaga and Rihanna tried to feature ‘cute’ slow lorises in their video and photos last year.

But a pet slow loris comes at a huge cost with the illicit pet trade one of the leading threats to slow lorises worldwide. Most captive or pet lorises are from the wild. Poachers steal them, often pull out their sharp teeth using pliers to prevent them from biting, and keep them on harsh diets in unsuitable conditions.

Largely understudied, this little primate needs urgent conservation attention. So how will understanding the ecology, biochemistry and evolution of its venom help loris conservation?

“If we understand how lorises produce venom—whether the venom decreases in captivity, and if the venom is vital for their lives in the wild—it could help us with slow loris reintroduction programs,” said Nekaris. “Also, understanding how loris venom wounds other lorises can help us improve the health care of lorises and humans inflicted with bite wounds.”

She added, “We hope that in the future, knowing how dangerous loris venom can be to susceptible individual humans will eventually decrease human desire to keep lorises as pets.” 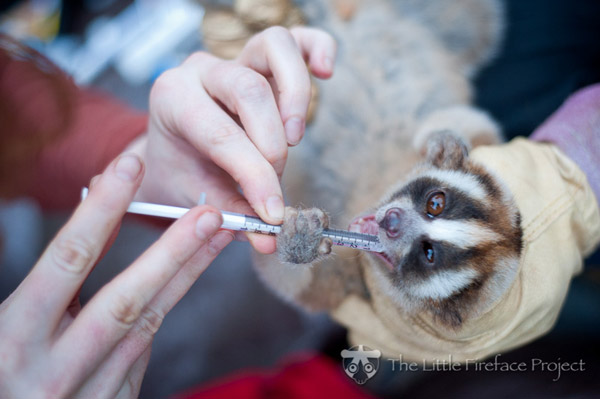 Scientists collecting venom from a slow loris for study. Photo by: Andrew Walmsley.