by Mrinalini Erkenswick Watsa on 12 September 2014

This is the second part of a two-part series. Part I outlines the expansion announcement.

In an August 14 announcement, Bolivian Vice President, Alvaro Garcia Linera, laid out an ambitious plan to increase the country’s cropland by 250 percent, and triple its agricultural output. The proposal is touted as way to increase both food and economic security for the inland South American country, but what will it mean for its forests?

Global Forest Watch, a subsidiary of World Resources Institute, reports that forestry forms 2.2 percent of the Bolivian GDP ($431 million). In the last 13 years, about three mha of land has been deforested in Bolivia. The new proposal demands land. Is there land available then that is already disturbed and can be reclaimed for agriculture? In other words, can the expansion of the agricultural frontier by 7.78 mha be achieved without further deforestation? 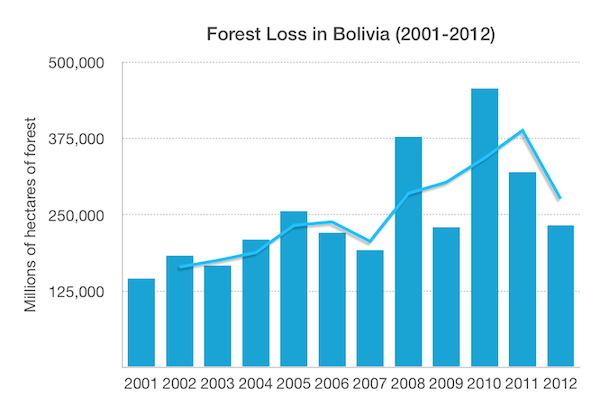 Forest loss trajectories per year according to data from the Global Forest Watch.

Tree cover extent (left) and deforestation between 2000-2012 (right) in Bolivia. Most deforestation can be observed within the Department of Santa Cruz, which is Bolivia’s largest food producer. Data from Global Forest Watch. Click to enlarge.

“No land without forest is available anymore,“ Dr. Robert Müller, a biologist from the Institute of Geography in Georg-August-Universität, in Göttingen, Germany, who has been working in Bolivia since 2000, told mongabay.com. “Clearing 1 million hectares per year would increase the deforestation rate – which is among the highest in the world already – by a factor of 4 or 5.” 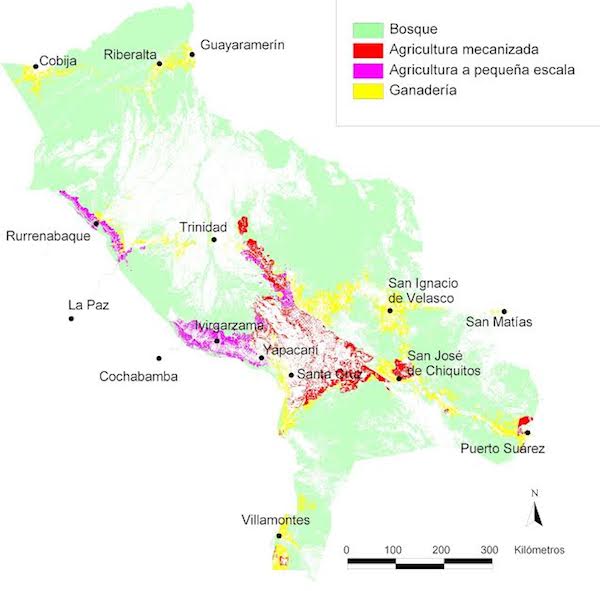 Projected deforestation (in yellow) assuming an expansion of 5 million hectares as of 2040. Figure adapted from Müller et al, 2014.

“The announcement is in strong contradiction to environmental policies in Bolivia, such as the Law of Mother Earth,” Müller said. “The required land would only be available in forested areas where conversion to non-forest uses is forbidden or highly restricted by law.”

According to Müller, mechanized and small-scale agriculture were responsible for 29.7 percent and 18.4 percent of deforestation, respectively, over the last ten years. But he also pointed out that the main driver of deforestation in Bolivia is cattle ranching, which contributed to over half of all deforestation between 2000 and 2010.

Agriculture within the department of Santa Cruz is already highly mechanized, focused on the extremely fertile soil in the Rio Grande floodplain. However, in order to expand, agriculture will need to move into areas with poorer soil, necessitating the use of fertilizers, according to Müller.

An ecological map of Bolivia (left) in comparison to the various players and their land use rights (right). The Santa Cruz Department has the most variable habitat types and is also occupied by the highest area used for mechanized farming. Maps adapted from the CIFOR report on deforestation in Bolivia. Click to enlarge. 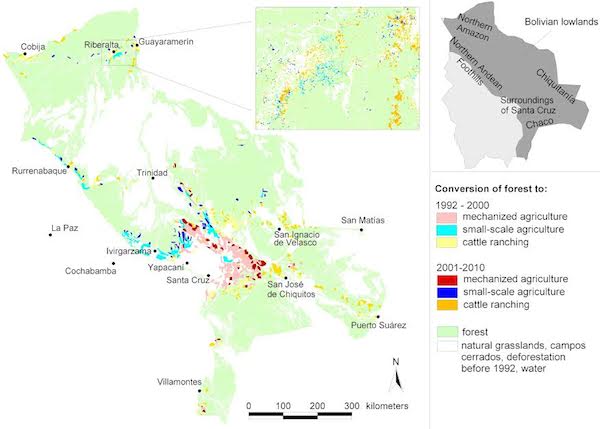 The direct causes of deforestation in Bolivia in the 1990s and 2000s, indicating reliance on mechanized agriculture and cattle farming concentrated in the Santa Cruz Department. Map adapted from the CIFOR report on Bolivian deforestation. Click to enlarge.

On the one hand, this proposal could bring economic stability to Bolivia, with less dependence on imports, and a healthy population fed on home-grown products. The proposal is slated to provide 1,000,000 new jobs and will require an investment of 13 million dollars. In addition to consolidating Bolivian food sovereignty, it will generate huge surpluses and thus large amounts of currency through exports.

However, the goals of the proposal cannot be achieved without other significant changes to Bolivia’s agricultural practices and economy.

First, increases in food production will require more than just land acquisition – it will also require increased technical know-how and better food production strategies. According to Álvarez, Bolivia remains noncompetitive in cotton, maiz and soy production; these low yields can only be increased if the government lifts the ban on using transgenic seeds and biotechnology to improve growth. 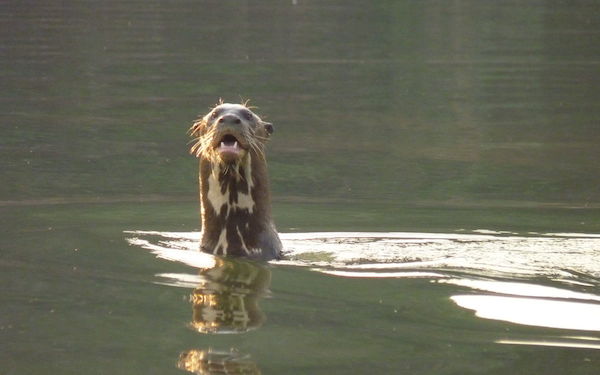 Bolivia’s forests are home to giant otters (Pteronura brasiliensis), which are listed by the IUCN as Endangered. Individuals otters identify each other by the unique patterns of white splotches on the necks. Photo by Rio Cicica.

Aggressive mechanization, investigations into using new species, and a massive transportation overhaul are some of Álvarez’s other requirements.

The Bolivian road network will need to be expanded, and complementary transportation systems (including air, water and train) will need to be fortified. Álvarez even proposes the creation of a Bolivian Merchant Navy to manage the expected massive food production that is the nation’s ultimate target.

According to Linera, Bolivia is ready to meet this new challenge.