Scientists have identified a new species of frog on the Malay Peninsula. The newly named Hylarana centropeninsularis was discovered in a swamp and genetic analyses revealed that it is evolutionarily distinct from its stream-dwelling cousins.

After publishing the discovery in the online journal Herpetologica, Kin Onn Chan, a doctoral candidate at the University of Kansas, told mongabay.com that the frog was actually first found 10 years ago.

“An ex-student of my ex-advisor at the National University of Malaysia collected it in one of her pit-fall traps… After digging through historical records and literature, we found that it was not the first time that that particular ‘species’ had been found,” Chan said. 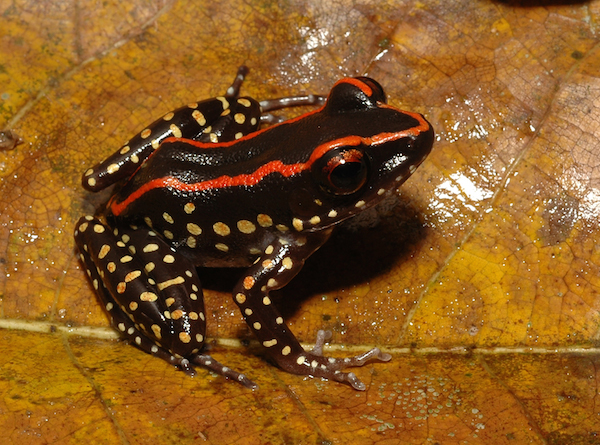 Yet this original breakthrough went unrecognized when the frog was misidentified due to striking similarities with another species (Hylarana siberu) living in Sumatra, which is also black with orange stripes and yellow spots. But when Chan’s team examined their own Malaysian specimen, they became suspicious about the distance between the two habitats.

“Despite these similarities, it actually strengthened our suspicion that it was a new species because based on the Unified Species Concept, we know that it was quite improbable for the Peninsular Malaysian populations to be sharing genes with populations from Sumatra,” he said.

Tissue samples were sent back to a lab at the University of Kansas for genetic analysis and the team’s suspicions were confirmed. They had indeed identified a new species, although they speculate that both frogs probably share a common ancestor because the Strait of Malacca, the stretch of ocean that separates the two species, was once a land bridge.

The researchers named their rediscovery centropeninsularis, referring to the frog’s home, the center of Peninsular Malaysia. According to Chan, this was part of an effort to raise awareness of the region’s natural significance. 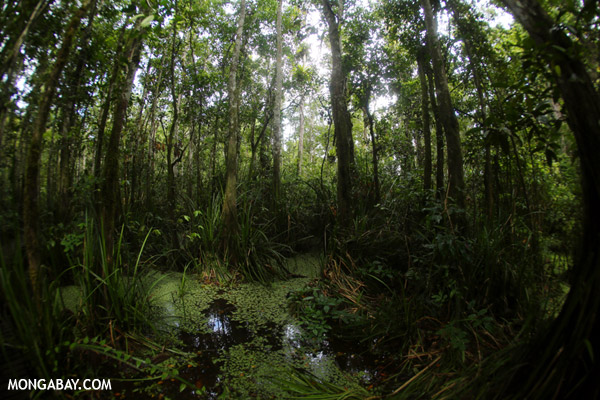 A peat swamp in Malaysian Borneo. Photo by Rhett A. Butler.

Hylarana centropeninsularis has evolved to live in swamps, a tropical forest habitat characterized by waterlogged soil, which are home to many different species of animals. Chan and his team have spent years studying the biodiversity of swamps and suspect they may house many more new species awaiting scientific observation.

“Swamp/peat ecosystems are very unique and species that live there have adapted to a very specialized lifestyle,” Chan said. “Due to the insular nature of many swap/peat habitats, it would be hard for species to disperse away… hence limiting gene flow.”