You may have recently read the controversial story on invasive lionfish research involving Dr. Zack Jud of Florida International University and a young girl named Lauren Arrington. While the issue of attribution in scientific research is crucial to the discipline, much of the media focus so far has sidestepped the real issue: what lionfish tolerance for brackish water really means for the environment.

It is now common knowledge that lionfish (Pterois volitans and P. miles), native to Indo-Pacific seas, have invaded the Atlantic. While the exact cause of the invasion hasn’t been conclusively determined, resemblance to specimens from the Philippines suggests released aquarium fish may be to blame. The first recorded observation of a lionfish in the Atlantic was made in 1985. Since then, the fish have multiplied and expanded their range from Barbados in the east, to Venezuela in the south, and up the U.S. coast to North Carolina.

The lionfish invasion may not stop there. In a recent study, led by Jud, in Environmental Biology of Fishes with researchers from the University of Miami and North Carolina State University, he discovered that the fish, typically associated with coral reefs, could survive in waters with salinities as low as five parts per thousand (ppt) – or one-seventh the average salinity level of ocean water and so low one can barely taste salt in it. This lends a new and worrying dimension to the expansion. 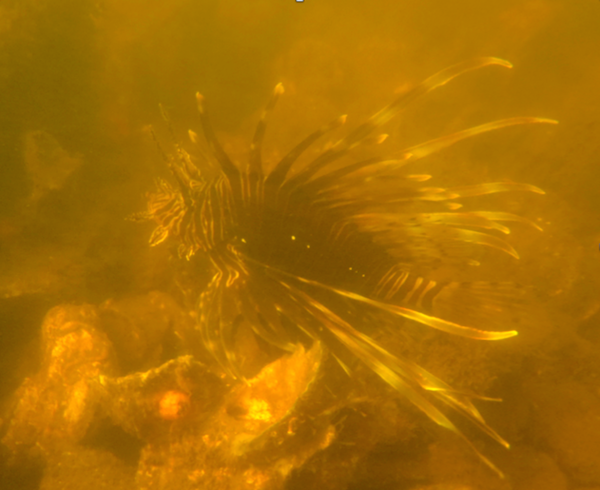 A lionfish where a lionfish should not be – at an oyster reef in the Loxahatchee River, 4.1 miles upstream from the ocean, where bottom salinity was eight parts per thousand. With the exception of a thin bottom layer, the remainder of the water column contained completely fresh water. Photo by Zack Jud.

Up and down the Atlantic coast, lionfish gorge on so much of the native wildlife that caught specimens show signs of fatty liver disease. The presence of such a voracious predator in estuaries, critical nursing habitats for many ecologically and economically important species (including coral reef organisms) is concerning for a number of reasons.

To begin with, lionfish may consume these species at a greater rate than native predators. This is a trend that already has been observed in coral reefs and could very well lead to shrinking native fish populations. Additionally, because lionfish benefit from prey naiveté, a phenomenon where native fish do not recognize them as threats, they are able to outcompete and harm an ecosystem’s original predators.

To make bad news worse, the invasion will likely threaten much of South America’s Atlantic coast. As lionfish numbers have exploded in recent decades, discharges of freshwater from the Orinoco River in Venezuela and the Amazon River in Brazil were suggested as possible barriers to the fish’s spread. However, this hope hinges on the assumption that the saltwater species cannot tolerate freshwater – an assumption that may no longer be such a safe bet.

“The low salinity tolerance that I documented suggests that lionfish may be able to eventually cross the Amazon-Orinoco Plume, leading to the potential colonization of much of the Atlantic coast of South America,” Jud said.

It may, therefore, just be a matter of time before lionfish start appearing off Copacabana. Still, what can we do to combat this invasion?

As disheartening as it sounds, we will never be able to eradicate these lionfish. Technical divers report large numbers of the fish at depths greater than 130 feet, the generally accepted depth limit for recreational SCUBA divers, and they have even been spotted as deep as 1000 feet. Furthermore, even if we could kill off all lionfish in shallow coastal waters, the offspring of populations from deeper seas would simply reseed them.

However, lionfish have one character trait that we can exploit: high site fidelity. Jud, in previous research, determined that once lionfish populate an area, they do not move around much. Hence, sites cleared of lionfish will see only tiny offspring moving in rather than larger individuals, resulting in a temporary reduction in numbers. Recent studies have shown that areas that are repeatedly cleared tend to have fewer lionfish over time, and those that remain are generally smaller.

This is crucial, as smaller individuals consume less prey, have a largely invertebrate-based diet, and have a smaller reproductive capacity. Areas that see repeated removals therefore stand a chance of limiting the negative impacts caused by lionfish. Already, regular “derbies” are being organized in the Western Atlantic and Caribbean to incentivise divers to remove the fish.

A more intriguing method is through our stomachs. The fish are beginning to appear on restaurant menus and represent an “ethical” alternative for consumers, especially if eaten as a replacement for other native species such as groupers or snappers.

In addition, “lionfish are delicious to eat,” according to Jud.

Although lionfish consumption is growing in popularity, Jud still sees problems with this approach, first of which is the difficulty of catching them. The fish cannot be harvested through traditional hook-and-line techniques, and the supply of lionfish fillets cannot keep up with demand. Furthermore, commercial spear fishermen are sparing juvenile lionfish to let them reach a marketable size, allowing them to continue wreaking havoc.

With regard to the future, Jud is working to understand why lionfish have so successfully colonized the Atlantic, so that future invaders may be predicted and deterred.

And where people are making a concerted effort to target the fish, things finally seem to be improving to some degree.

“I’m having a tough time finding lionfish in shallow water in the [Florida] Keys right now,” said Jud, and to him that is undoubtedly “a good sign.”