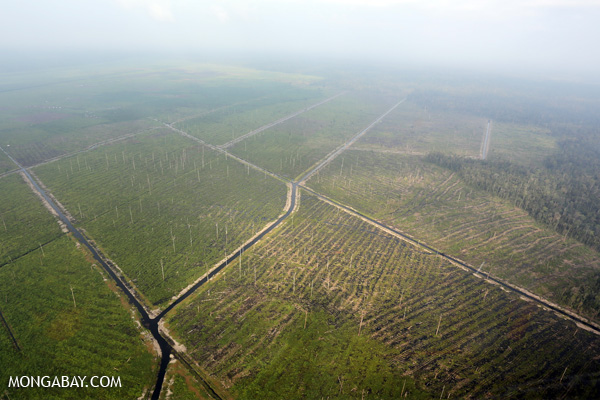 Light haze over a drained and deforested peat forest in Riau, Sumatra in February 2014. Photo by Rhett Butler.

Air pollution caused by fires set for land-clearing on Sumatra has become a regularly occurrence in Southeast Asia, spurring hand-wringing in Singapore and Malaysia over health effects and worries among environmentalists over the climate impacts. While these fires are often termed “forest fires”, the reality is much of the area that burns each year has already been deforested and today mostly consists of grass, scrub, and remnants of what was once forest. But the impacts are nonetheless very substantial, finds a new study published in the journal Scientific Reports.

The research, led by David Gaveau of the Center for International Forestry Research in Indonesia, assessed greenhouse gas emissions from fires that burned for a week in June 2013. While the fires were short-lived and almost entirely (82 percent) concentrated on already deforested lands representing less than 2 percent of Indonesia’s land mass they released 172 million metric tons of carbon dioxide, or up to 10 percent of the country’s annual greenhouse gas emissions. The reason for the large emissions was 84 percent of the burning occurred on peatlands, which store massive amounts of carbon in their soils.

Worryingly, the study notes that the fires occurred in a wetter-than-average year, suggesting that severe forest degradation in Sumatra due to years of clearing and peat drainage for industrial plantation development has set the stage for problem to worsen. 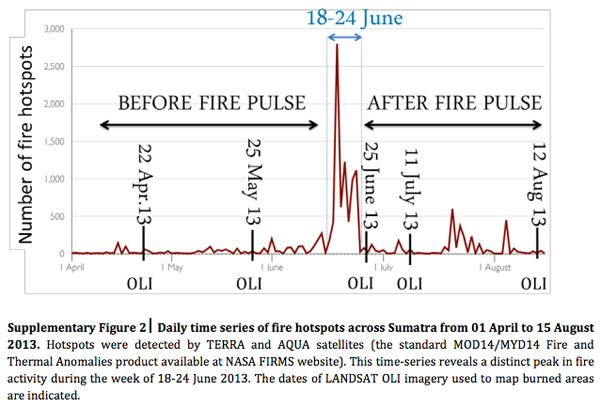 Our results demonstrate that the Indonesian fires of 2013 behind the record air pollution episode in Singapore were triggered by a seasonal two month dry spell in an otherwise rainy year. These fires were short-lived and confined to recently deforested peatlands in a localized area in Central Sumatra (in Riau Province), reflecting ongoing conversion to oil palm plantations” the authors write. “The area affected was much smaller than the 9.7–11.7 million ha that burned in 1997. However, the emissions of GHG and smoke during this brief localized event (one week and 1.6% of Indonesia’s land) were disproportionately large because of the peat.

“Our observations show that extreme air pollution episodes in Southeast Asia are no longer restricted to drought years,” they continue. “We expect major haze events to be increasingly frequent because of ongoing deforestation of Indonesian peatlands.” 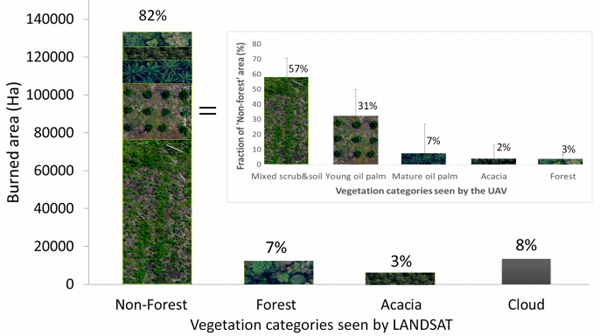 Vegetation cover of the burned areas (163,336 ha) before the June 2013 fires. The ‘Non-forest’ category contains a broad mix of vegetation
types, which we identified through a comparison against a more detailed vegetation classification derived from the Unmanned Aerial Vehicle (UAV). The study found “that 52% of the total burned area (84,717 ha) was within
concessions, i.e. land allocated to companies for plantation development. However, 60% of burned areas in concessions (50,248 ha, or 31% of total burned area) was also occupied by communities”. Image and caption courtesy of the authors.

The issue isn’t limited to Sumatra — vast areas of what was dense rainforest and peatlands in Indonesian Borneo are also now degraded scrub and burn regularly.

Indonesia has experienced rapid destruction and degradation of its forests in recent decades, even surpassing the Amazon in terms of annual forest loss, according to a separate study published in Nature Climate Change. 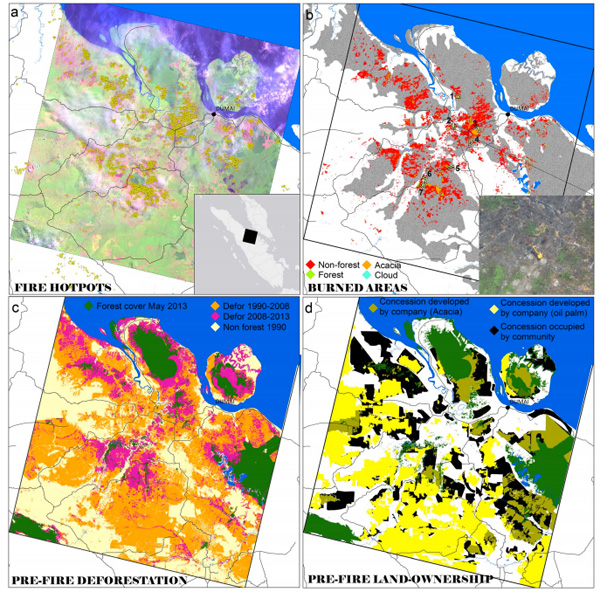 CAPTION: The three-million ha study area in Riau province, Sumatra. (a), Fire hotspots. MODIS daily hotspots distribution for June 2013 (yellow dots) overlaid on a post-fire LANDSAT OLI imagery (12 August 2013) displayed in false colors (RGB: 6-5-4). (b), Burned areas. An estimated 163,336 ha burned in the study area: red (non-forest), green (forest), orange (Acacia plantation) and cyan (cloud). Peatlands are shown in darkest shade of grey; superimposed are the seven locations of the UAV transects. The bottom inset is a UAV snapshot over peatlands deforested 3 years prior to the June 2013 fire, where dead carbonized tree trunks and an excavator preparing land for oil palm are clearly visible. (c), Pre-fire Deforestation. Loss of species-rich Dipterocarp forest from 1990 until May 2013. Light brown: non forest in 1990. Orange: deforested between 1990-2008. Purple: deforested between 2008 and May 2013. The study area lost 1.72 million ha (78%) of forest between 1990 and May 2013 (including 1 million ha on peat). (d), Pre-fire land-ownership map. Industrial oil palm and Acacia plantations developed by companies in concessions are shown in yellow, and in khaki, respectively. Concessions (for both oil palm and Acacia) occupied by communities are shown in black. Lands outside concessions are in white. Forest cover (unoccupied land) one month before fire is shown in dark green. Maps created using ArcMap v10.0 geospatial processing program. The data used to generate the maps presented in this figure are made available online at http://www.cifor.org/map/fire/. Image and caption courtesy of the authors.