Elephants under the sea: awkward-looking fish modify the coral-reef ecosystem in mixed ways 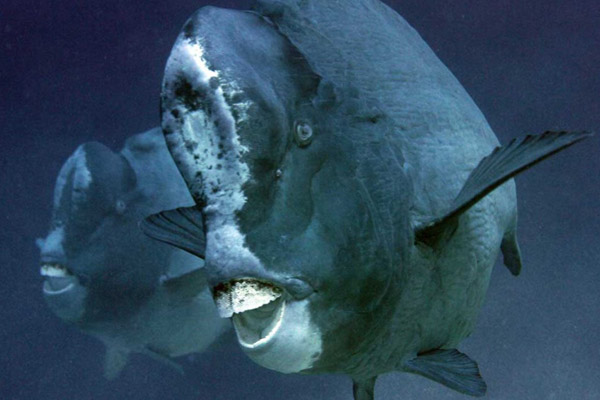 The decidedly odd-looking bumphead parrotfish is listed as Vulnerable. Photo by: Kurt Gross.

Bumphead parrotfish are noisy feeders. They break off large branches of corals using their powerful beaks, grind them up in their bodies to extract nutrients, and expel the undigested material in large cloudy plumes of feces.

Their voracious feeding is, however, not just a loud, messy affair. During the course of their feeding, bumphead parrotfish (Bolbometopon muricatum) also change the coral reef ecosystem in numerous ways, a new study published in Conservation Biology has found.

To understand how they influence the reef-ecosystem, Douglas McCauley from the University of California Santa Barbara and his colleagues, tracked five individual bumpheads at two remote locations in the Pacific Ocean, sometimes for up to six hours. Every time a fish took a bite, defecated or moved, they took note.

“We had to eat power bars and drink juice squeezes underwater in order not to lose the fish,” McCauley, lead author of the study, told mongabay.com.

With almost 30 hours of observations in hand, the researchers discovered that bumphead-coral interactions are a complex mix of positive and negative effects.

For instance, each bumphead gobbles up over two tons of living corals annually. Consequently, these reef-fish reduce the size, abundance, and diversity of the corals in the region. And, when the giant bumpheads defecate, their fecal plumes land on corals, coating them with carbonate sediments that can potentially stress corals.

But these “emerald-green, pink-nosed reef ogres,” as McCauley refers to them, also help the corals in several ways. One such way includes the dispersal of corals.

“This surprised us,” McCauley said. “Animal-aided dispersal is common on land (for example, birds and mammals disperse seeds), but extremely rare in the oceans.”

Each time a bumphead feeds, it yanks-off a coral branch, producing numerous coral fragments. As it swims around with the branch in its clumsy beak, some fragments fall onto the ocean floor.

“We estimated that about 14 fragments of living corals were produced every hour by a feeding bumphead,” said McCauley. “As it is with terrestrial seed dispersal, many of these fragments simply die. But we are certain that at least a small fraction of these dispersal coral pieces grow into new colonies.”

Bumphead overall impacts, however, are not straightforward. Their effects depend on a number of factors such as their abundance, which in turn is determined by the presence of their predators—reef-sharks and humans.

For instance, areas in which over-fishing has reduced shark numbers, bumpheads can reach high densities. In such cases, their negative impacts on corals may outweigh their positive effects. The researchers, however, caution that their observations of shark-bumphead dynamics are still preliminary.

Given the large scale of complex impacts bumpheads have on coral reefs, McCauley likens them to elephants in African savannas.
Both elephants and bumpheads are large, charismatic species in their respective ecosystems. Both are threatened by extinction—bumpheads are considered Vulnerable by the IUCN Red List–and both can have mixed impacts on their ecosystems.

While large-bodied elephants can cause deforestation and reduce regional biodiversity in savannas, bumpheads too can reduce coral abundance and diversity in oceans.

But unlike elephants, bumpheads have not been as lucky on the conservation radar as the elephants.

“There is as much or more Serengeti-like drama playing out on coral reefs as in terrestrial ecosystems that are famously reported upon,” said McCauley. “An important job for scientists, naturalists, and NGOs is to work harder to make the richness and importance of lesser known marine species like bumpheads more accessible.” 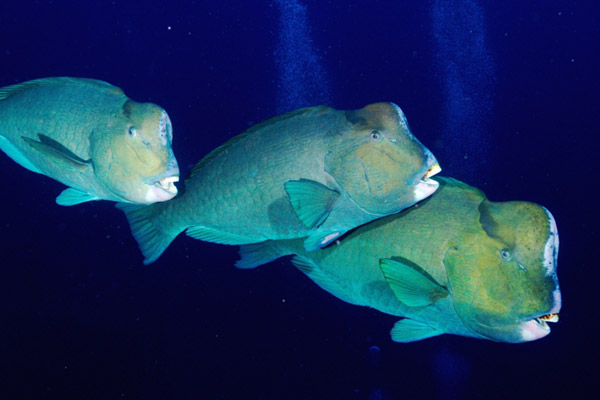 (06/18/2014) President Obama announced yesterday he intends to drastically expand the Pacific Remote Islands Marine National Monument making what will likely be the largest marine protected area on the planet. While the full extent of the ocean park has yet to be determined, it could potentially protect over two million square kilometers, an area larger than Mexico.

Deforestation reduces the size of fish