‘Yeti hairs’ lead to a new mystery, however 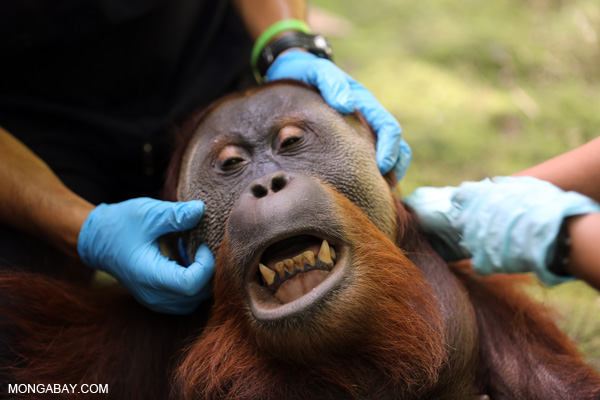 Some people believe there are large undescribed apes roaming North America and Asia. This male Sumatran orangutan is one of seven species (including humans) of great apes in the world today. Sumatran orangutans are currently considered Endangered by the IUCN Red List. All the great ape species (aside from humans) are currently threatened with extinction. Photo by: Rhett A. Butler.

Subjecting 30 hairs purportedly from bigfoot, the yeti, and other mystery apes has revealed a menagerie of sources, but none of them giant primates (unless you count humans). Using DNA testing, the scientists undertook the most rigorous and wide-ranging examination yet of evidence of these cryptic—perhaps mythical—apes, according to a new study in the Proceedings of Royal Society B. The result: 13 species were responsible for the hairs in question, most of them prosaic—such as cows, raccoon, and humans—but two of the hairs have kick-started another mystery.

“Despite several decades of research, mystery still surrounds the species identity of so-called anomalous primates such as the yeti in the Himalaya, almasty in central Asia and sasquatch/bigfoot in North America,” the researchers, headed by Bryan Sykes with the University of Oxford, write in the paper. “On the one hand, numerous reports including eye-witness and footprint evidence, point to the existence of large unidentified primates in many regions of the world. On the other, no bodies or recent fossils of such creatures have ever been authenticated.”

After conducting DNA analysis the researchers linked so-called bigfoot hairs to raccoon, sheep, black bears, canines (either wolf, dog, or coyote), horses, deer, cows, and even a human. Although only testing one hair form the orang pendak—a cryptic primate from Sumatra—the scientists found the hair was actually of a tapir.

But the tests showed more intriguing results when looking at the Yeti. While one of the Yeti hairs was from a serow—a strange bovid from East Asia—two of them were actually linked to an ancient polar bear that supposedly went extinct around 40,000 years ago. While this finding was announced last year, the paper reveals the scientist’s interpretations of the data. 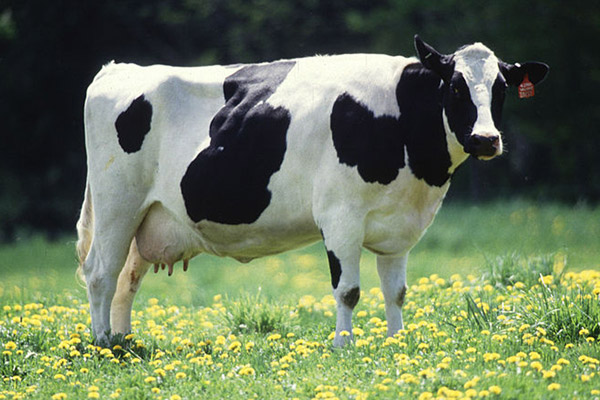 A few of the purported bigfoot hairs actually came from cows. Photo by: Keith Weller/USDA.

According to the researchers, the discovery, whcih they dub “preliminary,” could mean that there is an undescribed bear wandering the Himalayas. The region is already one to one bear species: the Himalayan brown bear (Ursus arctos isabellinus). But these two hairs—one from India and another from Bhutan—are not from this species according to the DNA. The story of how one of the hairs was obtained backs this up.

“[One sample] came from an animal shot by an experienced hunter in Ladakh, India [circa] 40 years ago who reported that its behaviour
was very different from a brown bear…with which he was very familiar,” the researchers write.

Another possibility is that these hairs could be from a new color variant of the polar bear (Ursus maritimus), since the hairs were not white but golden-brown and reddish-brown. Finally, the hair could be the result of a hybrid brown bear and polar bear.

“Viable…hybrids are known from the Admiralty, Barayanov and Chicagov (ABC) islands off the coast of Alaska though in the ABC hybrids the mitochondrial sequence homology is with modern rather than ancient polar bears,” the researchers write. “If they are hybrids, the Ladakh and Bhutan specimens are probably descended from a different hybridization event during the early stages of species divergence
between [brown bears] and [polar bears].”

However, there is another possibility not raised in the paper. Last year, Bill Amos, a researcher with the University of Cambridge, brought up that the two hairs could have been deliberately taken from an ancient polar bear specimen as a hoax.

While a new species of bear is unlikely, it’s not impossible. New mammals are discovered every year, but usually they are small, i.e. rodents or bats. However, last year scientists announced the discovery of what they believe is a new species of tapir in Brazil. Although the smallest tapir in the world, the new species still weighs an impressive 110 kilograms (240 pounds). It’s been dubbed the Kobomani tapir (Tapirus kabomani). New primates have also been discovered recently, but these are always small-bodied monkeys, lemurs, or lorises in the tropics.

While, the authors note that the hairs in question don’t provide any evidence for a large-bodied, unidentified apes roaming the wilds, it doesn’t make it impossible either.

“Rather than persisting in the view that they have been ‘rejected by science’, advocates in the cryptozoology community have more work to do in order to produce convincing evidence for anomalous primates and now have the means to do so,” they write. “The techniques described here put an end to decades of ambiguity about species identification of anomalous primate samples and set a rigorous standard against which to judge any future claims.” 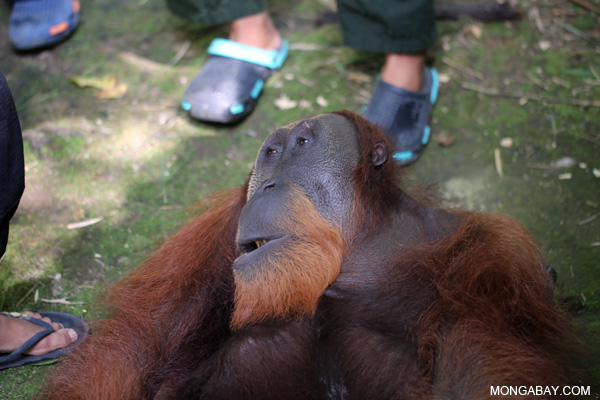 On babies and motherhood: how giant armadillos are surprising scientists (photos)

(07/01/2014) Until ten years ago scientist’s knowledge of the reproductive habits of the giant armadillo— the world’s biggest— were basically regulated to speculation. But a long-term research project in the Brazilian Pantanal is changing that: last year researchers announced the first ever photos of a baby giant armadillo and have since recorded a second birth from another female.

(03/25/2014) In 1929, two sons of Theodore Roosevelt (Teddy Junior and Kermit) led an expedition that killed a barking deer, or muntjac, in present-day Laos, which has left scientists puzzled for over 80 years. At first scientists believed it to be a distinct species of muntjac and named it Roosevelts’ muntjac (Muntiacus rooseveltorum), however that designation was soon cast into doubt with some scientists claiming it was a specimen of an already-known muntjac or a subspecies. The problem was compounded by the fact that the animal simply disappeared in the wild. No one ever documented a living Roosevelts’ muntjac again—until now.

California ‘sea monster’ is an oarfish

(10/16/2013) The dead “sea monster’ spotted off the coast of Southern California on Sunday is actually an oarfish, a deepwater fish species that can reach a length of 55 feet (17 meters).