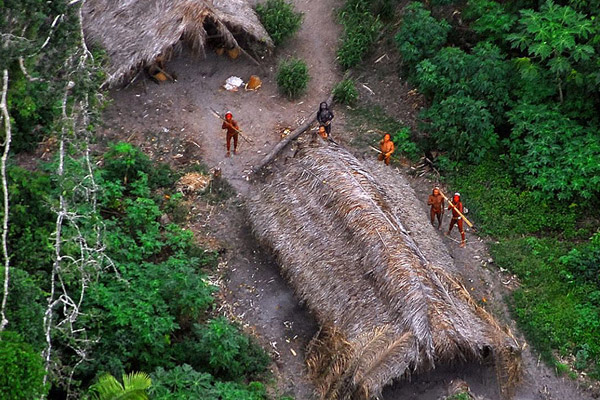 Aerial photo of uncontacted tribe in Brazil. Photo courtesy of the Government of Brazil.

In 2008, images of an uncontacted tribe in the Amazon rainforest in Brazil created ripples. With bodies painted in bright red war colors, members of the tribe aimed their arrows at a Brazilian government plane flying overhead, occupants of which were attempting to photograph the tribe to prove their existence to the world. Now, a new study has found another way to survey such uncontacted tribes safely and remotely—using satellite images.

Scientists from University of Missouri and University of New Mexico used Google Earth imagery from 2006 to estimate the population of one such isolated tribe in Brazil near the Peruvian border, in the study published in The American Journal of Human Biology. The image showed a small village with four longhouses and horticultural fields in a clearing of 3.8 hectares within the dense Amazon rainforest. By comparing the area of this village with that of 71 other indigenous Brazilian villages in forests with known populations, they estimated the population of this uncontacted village. The final estimate was small—there were fewer than 40 people.

This could possibly be the same tribe photographed in the 2008 flyover, according to Robert S. Walker, Assistant Professor at University of Missouri and lead author. “Actually it is hard to be 100 percent certain because the exact location of the flyover pictures was not revealed to my knowledge. But it is the same region and the house alignment appears to be similar,” he added.

A subsequent attempt to track the village in 2011 in a plane revealed at least nine people, the researchers write. Soon after that there were reports that the tribe had fled, perhaps due to threats of drug traffickers in the region. When the scientists tried to track them in 2012 using satellite images again, they were not as lucky. 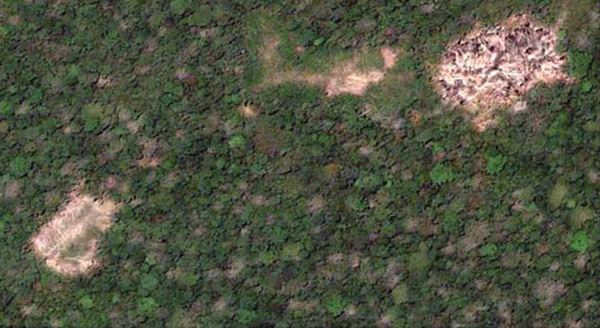 Google Earth imagery from 2006 shows a clearing in the center of four longhouses and slash-and-burned field for crops. Photo by: Walker and Hamilton.

“The Google Earth image from 2006 is fortuitous,” Walker told mongabay.com. “I tried to find them in the 2012 imagery and they had moved. So we haven’t been able to track them but I think it is possible to do so.”

Small populations like these risk imminent extinction due to various threats. But contacting these tribes may prove even more disastrous. Diseases commonplace in our society, like the common cold, can wipe out large portions of such tribes in a matter of days. Therefore, using satellite images to regularly and remotely survey their populations, and track their movements could prove a good non-invasive way
of keeping a close eye on the tribes and protecting them from afar.

The satellite images can also be used to delineate threats to these tribes, such as deforestation, cattle ranching, roads, illegal mining and outside colonization.

“We could use this information to shape policies in ways that mitigate against these threats, such as setting aside and enforcing larger protected areas,” write the authors. 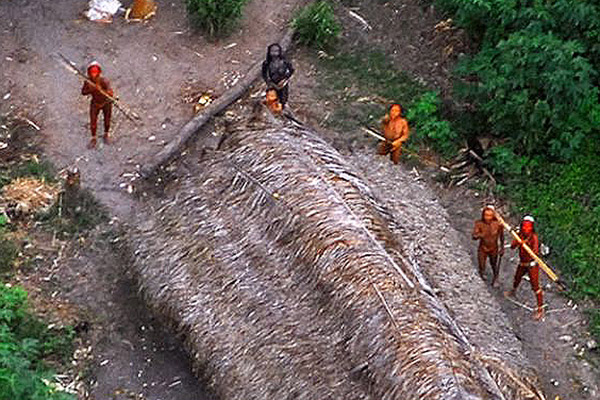 Close-up of uncontacted tribe in Brazil. Photo courtesy of the Government of Brazil.

(02/04/2014) The Peruvian government has approved plans for gas company Pluspetrol to move deeper into a supposedly protected reserve for indigenous peoples and the buffer zone of the Manu National Park in the Amazon rainforest. The approval follows the government rescinding a highly critical report on the potential impacts of the operations by the Culture Ministry (MINCU), the resignation of the Culture Minister and other Ministry personnel, and repeated criticism from Peruvian and international civil society.

(08/26/2013) Over 100 members of a voluntarily isolated tribe emerged from the jungles of Peru in a rare appearance on the Las Piedras River across from the a Yine Indian community in late June. Belonging to the Mascho-Piro Indians, members of the “uncontacted” tribe are occasionally seen on riverbanks during the dry season, but appearances in such numbers and so close to a local community was unprecedented.

(08/16/2013) Next week the Colombian government will officially double the size of its largest national park, reports El Espectador.

(02/23/2013) The March 2013 issue of Smithsonian magazine features an account of the flight that confirmed the presence of an isolated indigenous tribe in a remote part of the Colombian Amazon.