Tropical cloud forests are situated in mountains and are characterized by the frequent presence of low-level clouds. Scientists have always regarded them as having high biodiversity, but a study published recently in mongabay.com’s open access journal, Tropical Conservation Science adds a new dimension: it found cloud forests contain a significant and surprising array of tree and bromeliad species, even when they are relatively small.

A team of researchers analyzed the tree biodiversity of four of Mexico’s remaining cloud forests and concluded that, despite the recent retreat of these habitats, many species of trees and bromeliad have endured in relatively high numbers. 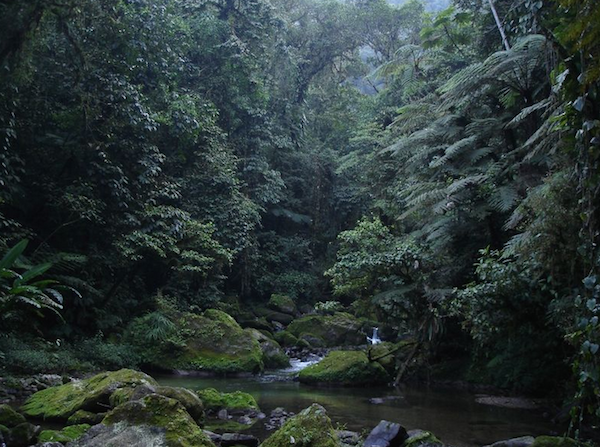 Bromeliads are a type of flowering plant found in the tropical Americas. They can be ground dwelling, such as pineapple, or they can grow up high in the canopies of trees. Species that fall into the latter category are called “epiphytes.”

To analyze the biodiversity of the Mexican cloud forests, researchers from the Mexican Institute of Ecology (INECOL) established six small plots in each of the four sites, in which they measured the botanical diversity. The team recorded 18 species of epiphytic bromeliads and 45 species of tree, including Quercus delgadoana, an endangered species of oak that turned out to be dominant at one of the sites surveyed. Other species of tree classified as Vulnerable by the IUCN were found to be in relative abundance.

Surprisingly, some of the smallest fragments of cloud forest boasted the highest levels of botanical diversity.

In the paper, the researchers speculate that forest fragmentation may have led to an increased amount of sunlight exposure in clearings and at the edges of the forests. This may have upset the monopoly of the tall established giants and allowed a greater number of “pioneer species” to grow.

Cloud forests are areas of high altitude woodland distinguished by a frequently low cloud cover. They host a uniquely cool tropical environment, and due to the narrow band of altitude and latitude in which they can grow, they account for only about one percent of the world’s forest.

Because of the highly specialized atmospheric conditions needed to sustain a cloud forest, many, particularly in Mexico, are expected to shrink or vanish outright due to human-caused global warming. Additionally, many cloud forests are currently targeted by logging companies.

The study indicates that these areas could be vital for the conservation of Mexico’s struggling forest habitats. According to the researchers, “even small and disturbed fragments can play an important role as reservoirs of tropical montane cloud forest biodiversity within the severely transformed landscape of the region.”

Unfortunately, the danger posed to these enigmatic woodlands remains prominent. In 2012, the journal Nature Climate Change published a paper warning that human-caused climate change is on course to wipe out 90 percent of Mexico’s cloud forests by 2080, and the loss of these habitats could mean the extinction of as many as 37 vertebrate species.