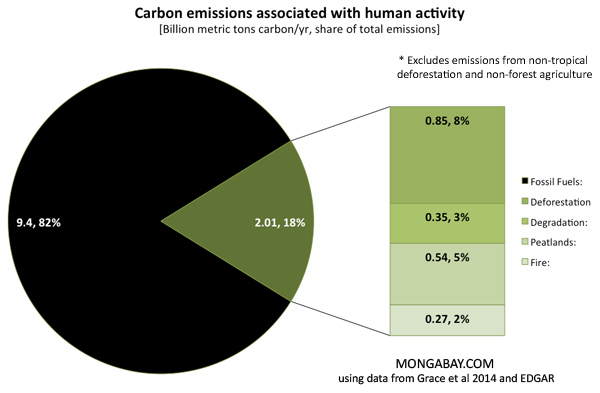 Eliminating deforestation, peatlands and forest degradation, and forest fires in the tropics could reduce global carbon emissions by two billion tons a year, or nearly a fifth, argues a new study published in Global Change Biology.

The research, authored by John Grace and Edward Mitchard of the University of Edinburgh and Emanuel Gloor of the University of Leeds, analyzed various emissions sources and sinks across the tropics. They found that carbon emissions from activities that damage and destroy forests are nearly counterbalanced by forest regrowth, reforestation, and afforestation. Cutting destructive activities would therefore be a substantial net gain in efforts to slow climate change.

“If we limit human activity in the tropical forests of the world, this could play a valuable role in helping to curb the rise in carbon dioxide in the atmosphere,” said Grace, who led the study, in a statement. “Preventing further losses of carbon from our tropical forests must remain a high priority.” 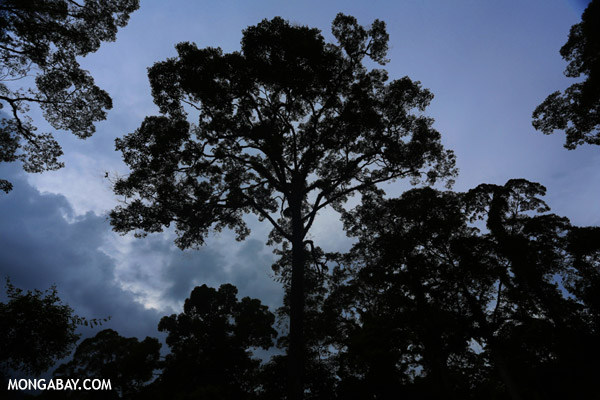 Rainforests in Borneo store especially large amounts of carbon in their vegetation but are being rapidly destroyed for oil palm plantations and timber production.

While protecting forests to mitigate climate change is widely known and is in fact the focus of the U.N. Reducing Emissions from Deforestation and Degradation (REDD+) program, the study offers a more comprehensive breakdown of carbon fluxes in the tropics.

For example, Grace and associates estimate that tropical deforestation accounts for roughly eight percent of carbon emissions, while degradation from logging and other activities contributes another three percent. Peatlands degradation through drainage and conversion for plantations adds an average of five percent, while fires represent another 2.5 percent. All told, these sources average about two billion tons of carbon annually, although this can be highly variable from year to year depending on el Niño and other factors that can exacerbate drought and fires. 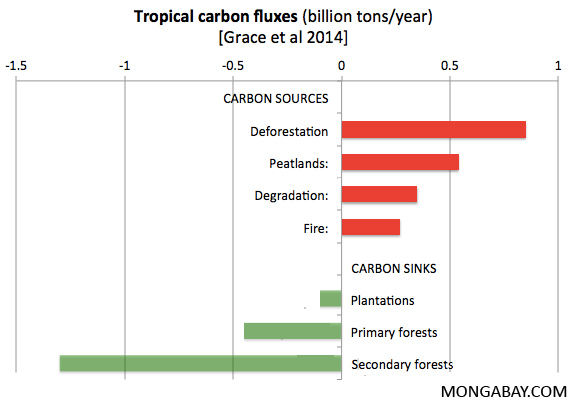 On the carbon sink side, the study counts carbon sequestered by plantations, primary forests that seem to be absorbing carbon at a faster-than-normal rate, and natural forest recovery via secondary forest growth. This sequestration is estimated at 1.85 billion tons of carbon per year. Combined with sources of emissions, the research suggests that forest lands have the potential to capture 3.8 billion tons of carbon per year — more than a third of global emissions — were degradation and destruction to cease.

But these estimates could be affected should global temperatures continue to rise, note the researchers. Other studies have shown that hotter and drier conditions can significantly reduce tropical forests’ ability to sequester carbon. Those losses can outweigh the gains of the “fertilization effort” resulting from increased carbon dioxide levels. By the end of the century, the effects of climate change could increase carbon emissions from forests by 760 million tons a year if current trends continue. 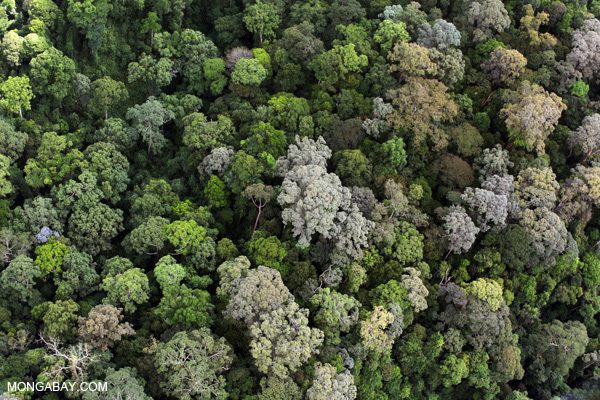 The authors conclude by arguing that accurate data about carbon sources and sinks be made “easily available and free” to underpin the REDD+ mechanism, which aims to cut emissions by compensating tropical countries on a performance basis for protecting forests.

(06/05/2014) Brazil’s success in reducing deforestation in the world’s largest rainforest has been much heralded, but progress may stall unless farmers, ranchers and other land users in the region are provided incentives to further improve the environmental sustainability of their operations, argues a study published this week in the journal Science.