The U.S. Environmental Protection Agency’s (EPA) June 2nd regulation proposal hit all the expected chords. Following on the heels of a January regulation for new power plants, the Clean Power Plan focuses on all existing electric generation. By 2030, the plan aims to reduce 2005-level carbon dioxide emissions by 30 percent and soot and smog-causing pollutants by 25 percent. It may also alter the national and global climate change dialogue more than expected.

As mongabay.com reported before its release, the EPA’s proposed rule comes after a series of climate change initiatives. The January regulation on new power plants effectively halted future construction of coal-fired electric generation plants. The International Panel on Climate Change recently released an authoritative tome on the climatic changes our globe is already undergoing as well as our daunting future challenges. And the Obama Administration’s interactive website dedicated to the National Climate Assessment,released just weeks before, provided a public knowledge foundation.

Electric generation is America’s largest source of the greenhouse gas emissions which cause global warming. By focusing on the energy sector, the EPA is tackling the biggest part of the CO2 equation first. However, many lawmakers and businesses believe regulations are economically inefficient. Some environmental groups say the plan does not go far enough, though Sierra Club executive director, Michael Brune said the proposal “represents the largest single step any President has ever taken to fight climate disruption.”

The executive branch, which controls the EPA, mandated the agency write this and other regulations, effectively sidestepping an inactive Congress. The proposal tasks individual states with determining the most economically efficient ways of reaching their tailored goals. This combination may goad players from all political stripes to act on climate change. 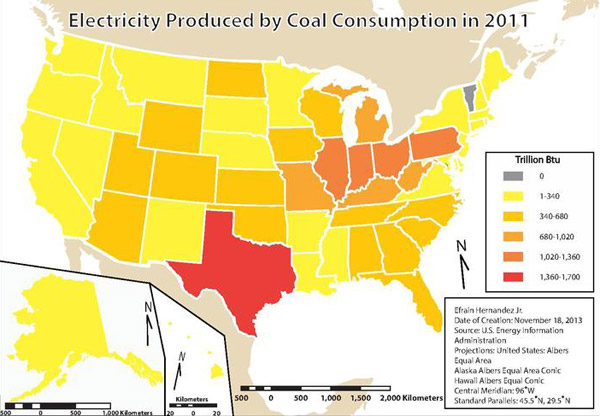 Energy produced by coal power by US state in 2011. Map by: Efrain Hernandez Jr./Creative Commons 3.0.

The conservative think tank, R Street Institute, says says that while “climate change is a pressing environmental and economic issue…these overly prescriptive regulations likely will impose enormous costs for relatively modest emission reductions.” While it may seem out of character for this kind of institution to consent the import of the climate change issue, the Institute is actually a vociferous supporter of market-based mechanisms to reduce CO2 emissions. It does not support the EPA’s proposal, but rather, believes that carbon taxes would make a significantly larger and more efficient impact on slowing climate change.

Because states are left to their own devices, they may choose market-based emissions reduction schemes, per R Street Institute’s recommendations. This writer has been a staunch supporter of pricing carbon emissions as a form of climate change mitigation. Both carbon taxes and cap-and-trade programs allow each carbon emitter to find the most economically un-burdensome way to cut its emissions.

While some groups do support variations of the proposal, it also faces staunch opposition from expected players. Despite many fossil-fuel companies including carbon prices in financial and strategic projections for several years, now, most of the energy industry has expressed hostile reactions. Some groups question the legitimacy of sidestepping Congress. One bill has already passed the House of Representatives to put all EPA guidelines within Congressional purview.

As the largest carbon dioxide emitter, the coal industry, in particular, feels victimized. Coal-buring power plants and coal production will see the brunt of the change. However, increased natural gas reserves and decreased costs of renewable energy have arguably played larger roles in coal’s recent slipping. The title of a recent Bloomberg View post by the Sierra Club’s Carl Pope reads Obama Isn’t Killing Power Plants. The Sun Is. Pope describes how solar is fundamentally disrupting utility profits by changing the costs—and the schedules—of energy supply. According to him, the decline of coal was underway before the EPA proposal and will require existing utilities to finance renewable investments to replace coal-powered generation. 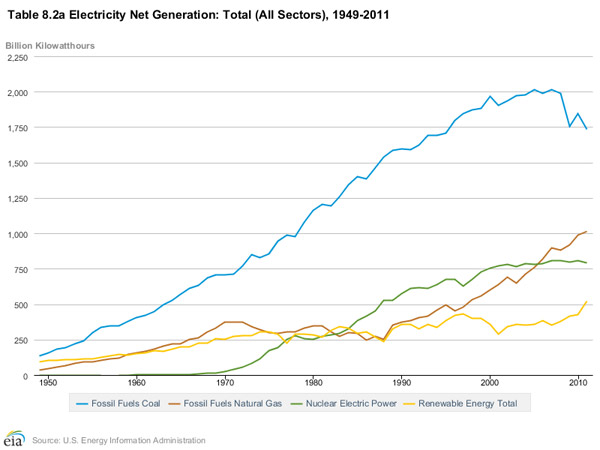 Energy sources in US from 1949-2011. Coal began plunging prior to new EPA regulations. Graph by: EIA.

Some critics of the plan specifically claim these market systems are much more efficient when mandated nation-wide—allowing a more liquid and fluid marketplace. Unfortunately, a gridlocked Congress has been ineffectual on that front. The American Clean Energy and Security Act, also known as the Waxman-Markey Bill, was shot down by the Democrat-controlled Congress in 2009. Even the Shaheen-Portman energy efficiency bill, which most energy analysts point to as low-hanging fruit, cannot seem to get passed.

However, to possibly facilitate the EPA proposal, U.S. House Representative John Delaney (D-MD) has introduced a bill in congress that would allow a “tax swap.” Such a plan would tax carbon and other greenhouse gas emissions in exchange for a tax break for individuals and businesses. This grows directly out of President Carter’s proposal to tax fossil fuels and gasoline in exchange for tax breaks structured to make up the difference in disposable income lost by the tax. In theory, it’s revenue and income neutral for both individuals and businesses.

The EPA anticipates national economic gains from the plan. According to the proposal, the reduction in emissions would lead to $48-$82 billion in net climate and health benefits. The plan is also designed to foster renewable energy growth, which will increase investments and job growth in the sector. However, the EPA also accepts the necessity for coal and natural gas in the nation’s immediate future.

Choosing 2005 as a baseline was a significant move, as well. While one may consider an earlier year favorable to those looking for drastic cuts in greenhouse gas emissions, 2005 was actually the peak of carbon emissions in the United States. This means that the total reduction in carbon emissions will be lower than if a later year was chosen. However, the standard simultaneously recognizes the successes of individual states, such as California and Colorado, in reducing greenhouse gas emissions—efforts which have been most effective since 2005.

The 2005 peak of carbon emissions and the EPA rule’s focus on CO2 may also misconstrue environmental dynamics. Largely because of the fracking-induced glut in natural gas, many electric generation facilities have begun to rely more heavily on gas than coal. However, a heavy debate continues over whether using more natural gas has a net positive effect on climate change and the local environment. In comparison to coal, natural gas emits significantly more methane, which has a greenhouse gas effect over 20 times more potent than carbon dioxide. In addition, the fracking technology that caused the increase in available gas is under intense investigation for safety, toxicity and induced earthquakes by NGOs and governments alike.

Lobbyists will be pushing for changes to the proposal before it’s settled. The hounds are sure to be released from all corners on Capitol Hill until the final ruling comes out in June 2015. As midterm congressional elections near, this may be a politically sensitive moment for such activities. Many Democrats, especially those in manufacturing and heavily coal-invested areas dependent on the status quo, oppose the regulation in the face of dubious reelections because of the EPA’s move. 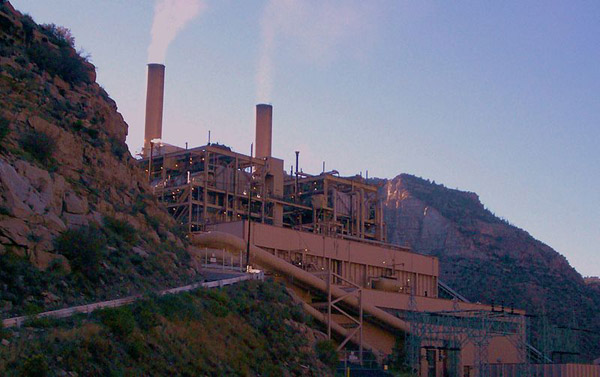 The Obama Administration is making this gamble to cement his legacy and up the amperage on the climate change debate. The final ruling in 2015 will require states to submit completed designs to hit CO2 emissions reduction targets. The plans will likely become effective soon after—all before Obama steps down in 2017.

Part of their reasoning may also be attributed to the broader strategy of gaining traction in the international climate change arena. During this fall’s UN General Assembly, governments are expected to start work on a global climate change mandate to sign in Paris in 2015. The 2012 UN Climate Change Conference chose 2015 as the year a successor document to the Kyoto Protocol’s 2020 extension would be revealed. As work begins on this next round, the U.S. lack of moral authority may otherwise be problematic.

Because of the U.S.’s economic and political influence, increasing the nation’s investment in global climate change mitigation efforts may affect beyond its borders. China is already the world’s largest CO2 polluter, and India is quickly catching up. China’s reluctance to engage in emissions reductions in recent negotiations was largely been attributed to American abstinence from voluntary emissions reductions schemes. And Canada became the first nation to back out of the Kyoto protocol in part because its Southern neighbor had never signed on.

As these negotiations open and climate change is internationally accepted, the involvement of all nations in greenhouse gas emission reductions is imperative. Like much regulation, it will take years to see the true efficacy of the EPA’s Clean Power Plan. If it does gain effective national momentum—and is not dismantled by courts along the way—the plan may well be a crucial aspect of global climate change mitigation.