The year was 1854, and cholera outbreaks had rendered London terrified and British anesthesiologist Dr. John Snow fascinated. In what is thought to be the first epidemiological study, Dr. Snow carefully mapped the locations of the victims and tried to find a common denominator.

“I found,” he wrote afterwards, “that nearly all the deaths had taken place within a short distance of the [Broad Street] pump.”

In what is now known as Snow’s “Grand Experiment,” he not only discovered how cholera had spread (through what he described as “white, flocculent particles” in the pump’s water), but, by removing the pump, he was able to put a stop to the outbreak. 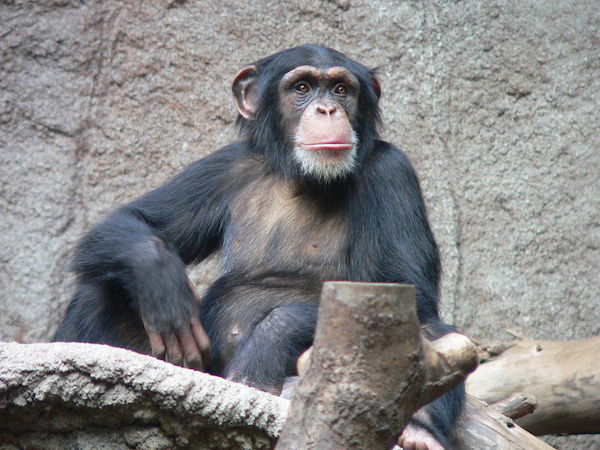 Chimpanzees (Pan troglodytes) have declined throughout their range and have disappeared entirely from four African countries. Photo by Thomas Lersch.

Over 160 years later, Dr. Snow’s techniques are still being used in the field of epidemiology. In a nine-year-long study published recently in PLOS ONE, five researchers added modern technology to John Snow’s observational studies in an attempt to understand how diseases spread and differ among orangutans (Pongo pygmaeus wurmbii) and chimpanzees (Pan troglodytes schweinfurthii), creating the first-ever epidemiological model for great ape populations.

Of all the threats that great apes face, infectious disease is one of the most significant. These two species are both listed as Endangered by the IUCN, and are at risk for extinction. Because of this, any information about dangers to their populations is important. Diseases such as Ebola, mange, tuberculosis, scabies, and measles are among the most dangerous.

Behavior-wise, chimpanzees and orangutans are very different. While chimps are highly social and exist in relatively large groups, orangutans are often solitary, or form groups with offspring only. By studying the social patterns of orangutans living in the Sabangau Forest of Central Kalimantan, Indonesia, and chimpanzees living in Budongo Forest, Uganda, the team of environmental anthropologists and conservationists began to track how diseases spread through their populations.

The going was slow: it took nine years to gather enough data on the orangutan population, and three years to collect information on the chimpanzees. The team focused on disease transmission from ape-to-ape, or from close proximity to other animals. Using focal follows – observing and recording behavior – the researchers were able to compile an epidemiological model with which to run simulations.

Using the models, researchers were able to simulate a disease within the two populations. Randomly selecting an animal to be the first infected “patient zero,” the algorithm simulated the spread of the pathogen based on the population and interaction data gathered in the field. The scientists also used various values for the probability of recovery and a “transmission coefficient,” measuring how easily the disease would spread.

The simulations ended when the disease effectively stopped spreading, and all the apes had recovered. Then, the total number of infected apes would be counted up and used to calculate the scale of the epidemic.

With the more solitary orangutan population, researchers found that disease did not spread quickly or very far. Even with an extremely low recovery probability and an extremely high transmission coefficient, the team found that only an average of 14 percent of the population became infected. 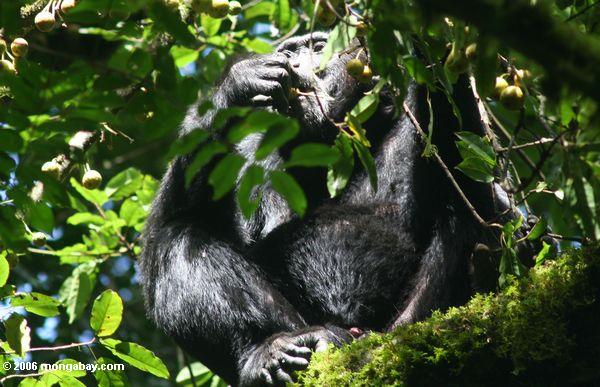 A chimpanzee in Uganda. Photo by Rhett A. Butler.

Conversely, the more social chimpanzees were at a significantly higher risk of infection. Even with a high probability of recovery and a low transmission coefficient, disease spread quickly throughout chimp population, resulting in an almost 18 percent infection rate. These results showed that the chimpanzees were much more vulnerable to epidemics than their orangutan counterparts.

For conservationists, this information gives valuable insight into one of the great apes’ most dire threats and may allow for more effective management of threatened populations. While orangutans are not exactly safe from disease, chimpanzees are much more at-risk, and the study suggests that effort should be focused on barring diseases from entering the population to avoid possible epidemics like that which Dr. Snow discovered in nineteenth-century London.

Because of chimpanzees’ gregarious nature, they are more likely to come into contact with infected individuals, or even with infected human tourists. The less-susceptible orangutans have comparatively less contact with the outside world, and are so in comparatively less danger from disease – although it should be said any loss in their numbers would have damaging effects on their already small and fragmented populations.

Increased human contact through ecotourism and logging, as well as shrinking habitats, may force great ape populations closer together, heightening the chances of an epidemic. Although this epidemiological model doesn’t have an answer as easy as simply removing the Broad Street pump, the information uncovered by this study may improve future conservation efforts for these iconic and endangered great apes. 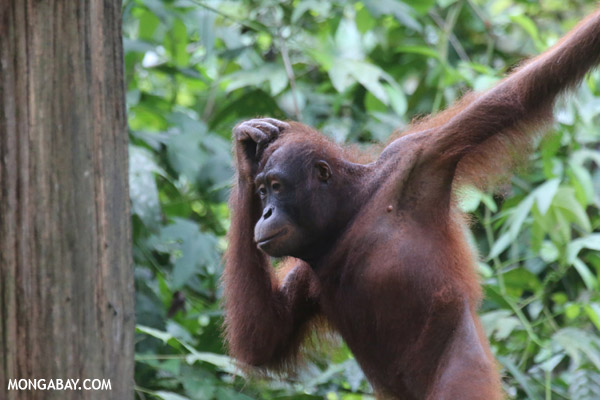 A Bornean orangutan. Photo by Rhett A. Butler.