For the first time, researchers have observed an adult marmoset comforting a dying adult family member, behavior that was previously thought to be unique only to humans and chimpanzees. Researchers observed this behavior between a mated pair of common marmosets (Callithrix jacchus) in Brazil, and describe the event in a paper and video published in the journal Primates.

Recently, there has been an increase in observations of nonhuman primates — primate species excluding humans — regarding their response to the death of family members. The majority of these studies have focused on chimpanzees, which were previously thought to be the only other primate species, besides humans, to show compassionate behavior towards dying family members. Chimpanzees have been observed to sit by the dead body or perform prolonged caresses and grooming of dead family members. 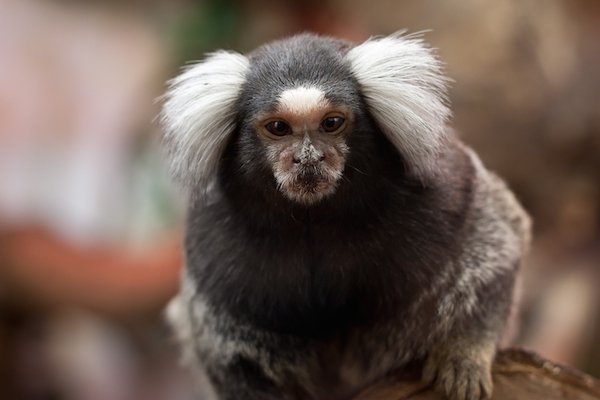 Common marmosets (Callithrix jacchus) are native only to east-central Brazil. They have been introduced into other areas and are found even in large cities such as Rio de Janeiro and Buenos Aires. Photo by Leszek Leszczynski.

Now, for the first time, scientists have discovered this compassionate caretaking of dying individuals in primates other than chimpanzees and humans. Dr. Bruna Martins Bezerra of the University of Bristol and her colleagues at the Federal Rural University of Pernambuco in Brazil observed an adult male marmoset tending to its dying female partner.

Bezerra and her colleagues have been monitoring a group of marmosets in a 0.12 square mile (0.31 square kilometer) area of the Atlantic forest in northeast Brazil since 2001. The marmoset group was composed of twelve individuals including four adult males, three adult females, three juveniles and two infants.

In February 2005, the researchers observed the dominant female of the group fatally fall from a tree. It took 153 minutes for her to die, during which her partner, the dominant male, exhibited astonishing behavior. When he noticed his mate lying on the ground, he left the two infants he was carrying in a tree and descended to her side. As the female lay incapacitated on the ground, the male displayed five distinct reactions including embracing, sniffing, sitting close, sexual advances, and watching.
The male also displayed protective and aggressive behavior through visual scanning of the area and alarm calling.

During this time, other subordinate members of the marmoset group observed the dominant female from a distance, but did not make any physical contact. Some juveniles in the group attempted to approach the dying female, but the male deterred their approach. Scientists have observed similar behavior in chimpanzee groups, yet it remains unclear as to why primates keep younger members away from a dying adult.

The dominant male sat in a nearby tree and observed the dominant female for twenty minutes after her last breath. He then picked up the two infants he had left in a tree and disappeared into the forest.

The dominant female of this group appeared to have experienced an untimely and uncommon death.

“It was an unusual death. I have seen common marmosets fall from trees on several occasions with only F1 (dominant female) suffering a fatal injury,” Bezerra told mongabay.com. “There are several causes of death in wild marmosets including predation, infanticide and [disease].”

Intimate behavior of marmosets has never before been observed in previous accounts of adult deaths. However, Bezerra has observed some caretaking behavior exchanged between a mother and her dying infant.

“In another group in the study site we saw an infanticide case,” Bezerra said. “The infant spent a short time on the ground before being killed. While the injured infant was on the ground, his mother was close by, trying to protect him.”

In the case of the dominant female’s death, the researchers believe the dominant male’s close-contact with his dying female partner shows some level of compassion. Yet, the researchers are unable to confirm this hypothesis nor give a definite reason why this case is different from other deaths. Perhaps the male’s tender behavior could be linked to the pair’s long-term partnership of over three years, which is one-third of the average life span of a wild marmoset.

“In the case of the marmoset dominant pair, they had formed a stable bond for a relatively long period, which may have contributed to the behaviors observed,” Bezerra said. “Previous reports of wild dominant female common marmoset deaths have not included intimate and close-contact behaviors by any group member towards a dead or dying individual. Humans have, until recently, associated such behaviors only with themselves and chimpanzees.”

Furthermore, the female may have been pregnant, which could also explain the male’s protective behavior.

The researchers do not know why the dominant male disappeared from the group after his partner’s death.

Understanding how nonhuman primates perceive and react to death is difficult to assess because of the rarity and complexity of the events. However, the researchers believe their documented observation of an adult showing caretaking behavior towards a dying member could provide further insight into the social dynamics of nonhuman primates and their reactions to death.

(05/01/2014) Once almost extinct in parts of Europe in the late 17th century, the roe deer (Capreolus capreolus) eventually bounced back, and how: today, it is one of the most widespread deer in Europe. But will its luck dry out in the future? A new study published in PLoSBiology suggests that while roe deer populations are still increasing, it may not be adapting to climate change.

(03/27/2014) Among the huge diversity of insects there are some bewilderingly complex life cycles, but few can compete with the trigonalid wasps for the seemingly haphazard way they ensure their genes are passed to the next generation. In most cases, a female parasitoid wasp deposits her eggs on or in the host, but this is far too pedestrian and safe for the trigonalids. These mavericks of the wasp world, which are also parasitoids, like to make things more difficult for themselves.