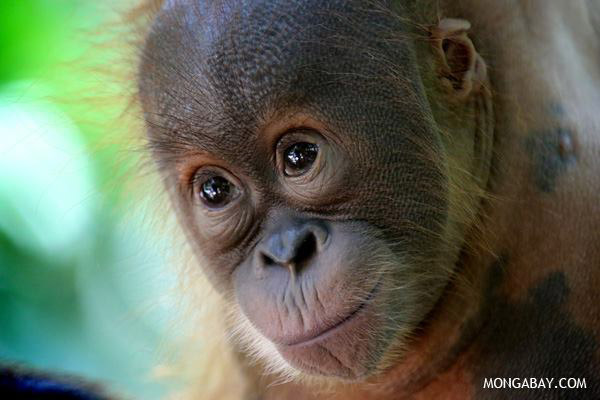 Orangutan in Sumatra. Photo by: Rhett A. Butler.

Next week, the rainforests of Southeast Asia are going live. On June 2nd, 11 organizations in the region will be posting lives video, photos, and wildlife sightings over 24 hours on Facebook and Twitter (see #rainforestlive). Dubbed Rainforest: Live, the initiative hopes to raise awareness of quickly vanishing ecosystems and species.

“So often coverage of rainforests focuses on the threats to jungles and wildlife. Amid stories about palm oil, deforestation, logging and poaching, it’s easy to forget the beauty and wonders of these forests,” said Matt Williams, Communications Manager for the Orangutan Tropical Peatland Project, which is spearheading the project. “If people in Southeast Asia and across the world are reminded of this incredible natural gift, then we have a better chance of saving tropical rainforests everywhere.”

No-where in the world are rainforests falling faster than in Southeast Asia. According to the Global Forest Watch, Malaysia has the world’s highest deforestation rate from 2000-2012, having lost over 14 percent of its forest during a dozen years. Indonesia is third, wand Cambodia comes in fifth.

Moreover in 2010, Conservation International rated the forests of mainland Southeast Asia (the Indo-Burma region) as the world’s most imperiled. The forests of Malaysia and Indonesia (Sundaland) were the third most threatened after New Caledonia.

“Rainforests in Sumatra and Borneo are home to the entire remaining world population of around 60,500 orangutans, which is rapidly disappearing. But it’s not just about the charismatic creatures we see in the headlines every day,” added Williams. “From fish, to birds, to frogs to butterflies, rainforests like Sabangau where OuTrop works are packed full of life.”

Southeast Asia also stands as one of the global hotspots for endangered species. According to the IUCN, there are 154 vertebrates currently listed as Critically Endangered in the region. In addition to habitat loss, many species are imperiled by the illegal wildlife trade.

“Rainforest: Live is an unprecedented event bringing live sightings straight from the jungle, and it’s very exciting that we’ll be leveraging the power of social media to bring people right into the heart of the jungle with us,” said Williams.

Brunei to limit agricultural land use to 1 percent

(05/25/2014) The tiny, but densely forested country of Brunei Darussalam says it will limit agricultural conversion to one percent of its land mass, preserving much of the rest for biodiversity and other services afforded by healthy forest ecosystems.

(05/25/2014) Tropical rainforests are the most species-rich ecosystems in the world. Each square kilometer has hundreds of tree species, birds and mammals, and countless other creatures. The idea that these forests could be devoid of animal life therefore seems ludicrous. Still the disappearance of birds, mammals and other species is what is happening in Indonesian forests. The ’empty forest’ syndrome is becoming an increasing reality in this country.