Overall, the brown bear is one of the most widespread bear species in the world, found in much of Eurasia and North America, in quite large numbers. A subspecies called the Himalayan brown bear is not so fortunate. It occupies higher reaches of the Himalayas in remote, mountainous areas of Pakistan, Nepal, Tibet and India. Its populations are small and isolated, and it is extremely rare in many parts of its range.

Over the last ten years, researchers in Pakistan, Nepal and India have been chalking out the status of the subspecies (Ursus arctos isabellinus), by conducting field surveys for bear signs and through conversations with local people. The bear populations in some parts of Nepal and the Tibetan Autonomous Region of the People’s Republic of China (TAR) belong to a separate subspecies (U. a. pruinosus), divided by a gap in distribution of the two subspecies between western Nepal and India. Political boundaries block connection of the last few strongholds of the Himalayan brown bear, with increased human presence and livestock conflicts worsening the situation. 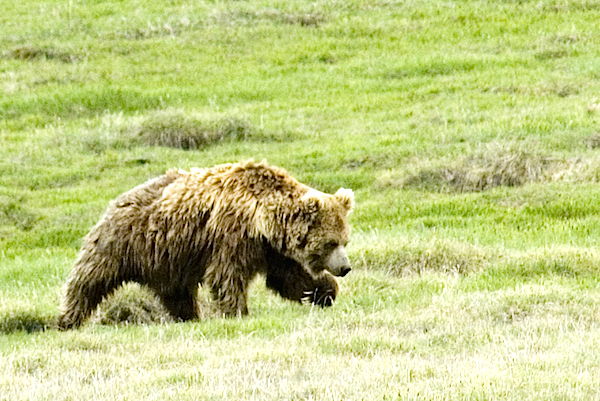 The Himalayan brown bear is one of the most ancient brown bear lineages. It’s a very large animal, with a big head, small eyes and stocky limbs. It is believed by some that the bear’s ability to walk upright probably gave rise to the legend of the Yeti or “Abominable Snowman.” People from the area call the brown bear “spang drenmo” (“spang” means grass and “drenmo” means bear), literally meaning “vegetarian bear.” The Asiatic black bear (Ursus thibetanus), on the other hand, is called “shai drenmo” (“shai” means meat), or non-vegetarian bear.

Although locals call it a vegetarian, the Himalayan brown bear is actually an omnivore. They are found above the timberline, between 3,000 and 5,500 meters (9,800 and 18,000 feet) above sea level. The bear depends on the sparse herbaceous vegetation in the area, supplemented by occasional small mammals like the Himalayan marmot (Marmota himalayana) in Nepal and the golden marmot (Marmota caudata) in Pakistan. Interestingly, the bears on the Tibetan plateau are primarily carnivorous, feeding mainly on the plateau pika (Ochotona curzoniae).

In India, not much is known about the Himalayan brown bear. A questionnaire survey among forest officials in 2006 conducted by Sambandam Sathyakumar from the Wildlife Institute of India put the number at 500 to 750, spread among 23 protected areas and 18 other localities in the northern states of Jammu and Kashmir, Himachal Pradesh and Uttarakhand. Their potential habitat range in India is estimated at 4,300 square kilometers (about 1,660 square miles), of which very little is protected. 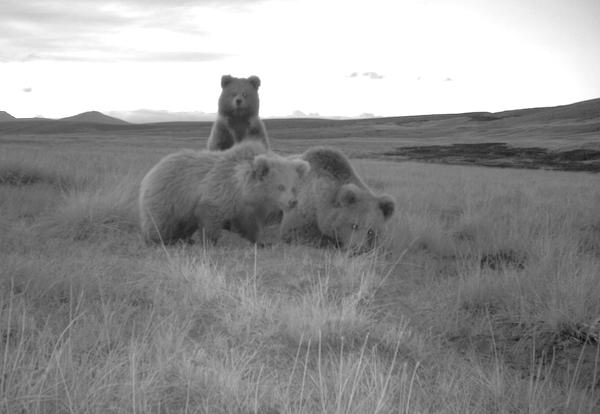 The Himalayan brown bear is found in three major mountain ranges, Hindu Kush, Karakoram and the Western Himalaya, and four inter-mountain highlands. Initial surveys showed that its range is highly varied, encompassing an elevational zone from 1,000 meters (3,300 feet) in the south to above 6,000 meters (19,700 feet) in the north. This area features a wide range of climatic conditions, from arid cold desert to monsoon fed moist forest, and supports a variety of vegetation, from alpine desert to coniferous forest.

To determine which habitat was most preferred by the bear, Muhammad Ali Nawaz of the Quaid-i-Azam University/Snow Leopard Trust worked with researchers from the Norwegian University of Life Sciences and University of Lyon, to carry out a study at Deosai National Park in northern Pakistan. This park supports one of the densest populations of Himalayan brown bears, and an array of different habitat types that allowed for an investigation into habitat preferences.

Deosai was established in 1993, at which time there were only about 20 bears. With careful management, the population grew over the next ten years; Nawaz was able to count about 56 individuals in 2012. The main mode of management was zonation – dividing the park into a core area with minimal human disturbance and having a “buffer” area around where some human activity like grazing was allowed. The sparse vegetation bears depend on is also the lifeline for nomadic herders called Gujjars, who graze their livestock in the areas around the park. Balancing the needs of wildlife and livestock is an added challenge for park management. 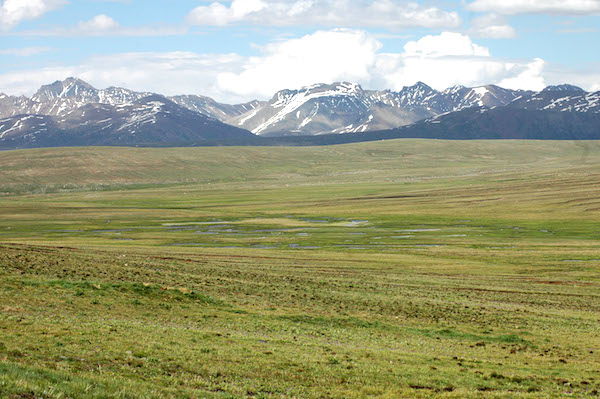 The area was divided into five blocks, in which Nawaz started with something simple — scat surveys. These are often the best proxies for actually seeing bears, which are very hard to find. Nawaz also took into consideration habitat type and features, such as marshes and grasslands, snowfields and rocky areas. The park was also classified into different grades according to human use, such as grazing, harvesting, roads and tourism.

Nawaz and his team uncovered important information about bear habitat preferences. Brown bears selected marshy, stony and grassy vegetation types, and avoided rocky areas. Marshy areas were especially popular because they generally supported high densities of golden marmots. Unfortunately, the researchers found that the area designated by Deosai park authorities as the “core” of the protected zone contained habitat that was just 14 percent high-quality, while half was poor bear habitat.

There was one additional clear trend — bears avoided areas where there was a lot of grazing. This is a cause for worry, because the number of livestock in Deosai has been increasing, from about 5,000 head in 2003 to 8,000-9,000 head in 2007. Due to the already sparse vegetation, the researchers found that Deosai cannot possibly support livestock without impacting bears.

To summarize, Nawaz and his team found that brown bears prefer lower elevations, gentler slopes and areas with less grazing. Surprisingly, this is in stark contrast to their preferred habitat in Nepal. 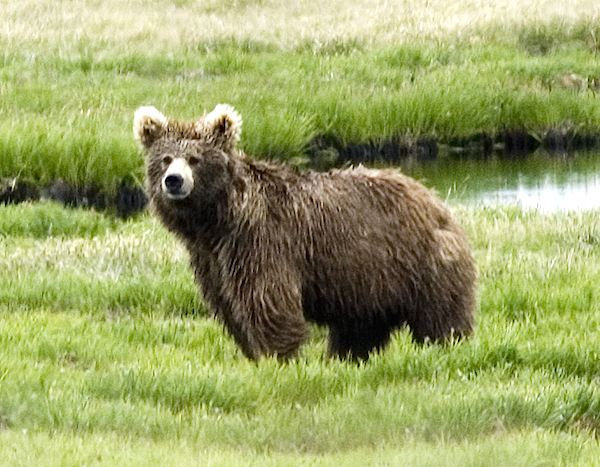 Historically, the Himalayan brown bear was present in Nepal and Bhutan. However, the species is presumed extinct in Bhutan. In Nepal, a 2010 study by Achyut Aryal and others reported records of the bear in the Manasulu Conservation Area.

Using field surveys and interviews with local people, much like Nawaz in Pakistan, Aryal found clear evidence for the continued existence of the bear. He found scat, excavations made by bears to dig out the Himalayan marmot and tracks. While interviewing people, Aryal used photographs of both brown and black bears to avoid confusion, as Asiatic black bears (Urus thibetanus) also inhabit the region.

Local herders had an interesting observation to make. Brown bears were a recent sighting in the area, and their theory is that the bears came to Nepal from the adjoining Tibetan Autonomous Region. People don’t kill marmots in the area, which makes them abundant and which is what probably attracted the bears. Scat analysis confirmed that marmots are a major food source for brown bears in the area.

In Nepal, Aryal found that brown bears avoid high-altitude meadows and preferred forested areas at lower elevations, probably because they could not find food at high altitudes.

“The habitat preference of the brown bear in Pakistan is totally different from where it’s found in Nepal,” said Aryal. “We cannot easily find marshy areas at the high elevations brown bears occupy here.”

Brown bears seem to seek out the most productive parts of any environment, using the next-best habitat when their favorite isn’t available. Nawaz discusses this adaptability at length in his study.

“In northern Pakistan (spread across Himalaya, Karakoram, and Pamir ranges), forest cover is limited. The area is dominated by rock/ice, scrub and alpine pastures,” Nawaz writes. “In this scenario, alpine pastures are the most productive habitats, and consequently selected by the brown bear.” 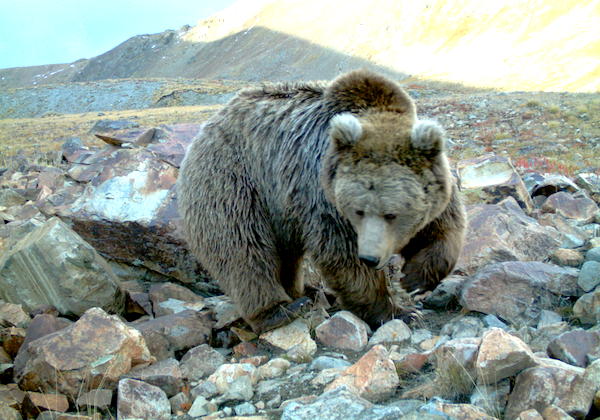 What will the future mean for the bears?

The Himalayan brown bear continues to persist, albeit in fragmented populations. There are points of contact between the Indian and Pakistani brown bear populations, along the Zanskar and Ladakh ranges. Movement of bears has been documented across the border, especially in some areas of military conflict where development has not taken place.

Still, Deosai National Park in Pakistan has the largest population of Himalayan brown bears in the region; it is also one of the few places where their habitat is protected. Nawaz says that the Himalayan Wildlife Foundation in Pakistan is planning to support the government in developing a new management plan for Deosai this year, which will be developed based on his recent paper. The revamped zoning plan will accommodate ecotourism and other resource use in a sustainable manner. 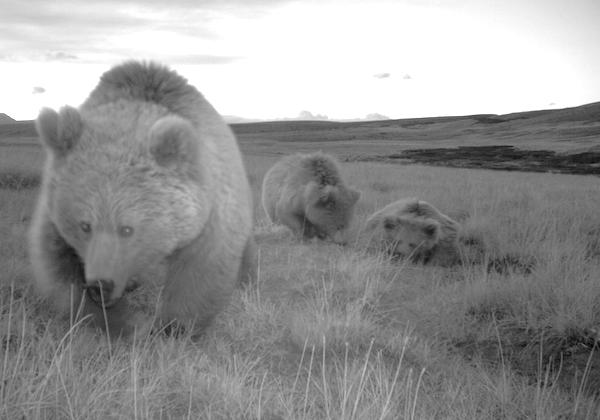 (12/10/2013) Mongabay’s internship program has benefited from the hard work and great environmental reporting of more than 30 writing interns since the program’s inception in July 2012. This year, Mongabay asked this pool of contributing authors to submit their most compelling piece out of over 150 articles. The submissions were then reviewed by a panel.