Life finds a way: the surprising biodiversity of cities

Public perception of wildlife tends to be tied to natural habitats such as forests, ocean and other wild settings. However, cities can provide habitat for many animals and plants. In the largest global assessment of urban biodiversity to date, published in Proceedings of the Royal Society, researchers examined the biodiversity of urban areas and found that cities are home to a surprising number of species. The study underlines the conservation importance of preserving and creating green spaces when it comes to urban planning.

The study focused on 54 cities for birds and 110 cities for plants in 36 countries across six continents. The researchers collected and analyzed data from various sources, including databases, surveys and existing literature and found that, on average, 20 percent of the bird species and five percent of the plant species of the regions they examined occur in urban areas. In addition, the number of different species, known as “species richness,” strongly correlated with city size, with bigger cities having larger numbers of different species.

To look at things a bit more specifically, the researchers divided variables into two parts: the “built” environment – buildings, roads and other human-made structures – and intact vegetation, also referred to as “green spaces” such as grasslands and shrublands. The study found that bird densities declined with natural landcover, indicating the importance of green spaces, and older cities were shown to support higher plant densities because they contain more intact vegetation. 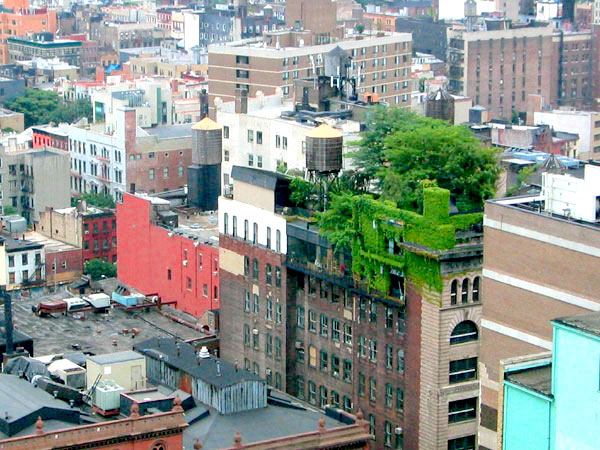 Green spaces can be created around buildings – or even on top of them, as is the case for this Manhattan apartment building. Photo by Alyson Hurt.

Although the study didn’t consider climate change, co-author Madhusudan Katti of California State University, Fresno, believes cities could be used to study its effects on animal and plants.

“The urban heat-island effect (cities are warmer than surrounding areas due to heat trapped by buildings and concrete surfaces) makes cities…vanguards of climate change, where we can study some of the effects on wildlife more quickly,” Katti told mongabay.com.

According to Katti, this study represents only a “snapshot” of the complex dynamics in species distribution patterns, and may actually be an underestimation of the impact cities can have on biodiversity conservation.

“Climate change is already changing the geographic distributions of many species as they try to track shifting climate zones,” Katti said. “Sprawling cities and associated transportation corridors act as significant barriers in the landscape, making it difficult for many species to adapt by moving with climate change. Making cities greener by restoring and connecting patches of native vegetation also makes them more permeable to allow wildlife to move through. This can only help make cities…more resilient to climate change.”

In addition to investigating the impacts of climate change, this study may also provide useful insights into overall biodiversity trends. According to co-author Myla Aronson from Rutgers, the State University of New Jersey, some trends –such as species density decline in urban areas — can be applied on a larger scale. However, she cautioned that different animal and plant groups will have varied responses.

“There is a greater proportion of non-native plant species in cities than non-native bird species, showing that birds and plants respond to the environmental conditions of cities differently,” Aronson said.

Vienna contains an estimated 50 percent green space, making it one of the greenest large cities in the world. Photo courtesy of Xell.

While the study’s analysis was done on a global scale, the majority of the mapped species richness came from Europe. Research of this magnitude requires copious records of both present and historical data, most of which is only available for Europe, resulting in a potential bias.

“European cities have a long history of understanding the biodiversity of their urban areas, so this was where most of the data was available,” said Aronson. “However, we divided up the cities into their biogeographic realm (where they occur in the world)…and found the same patterns and drivers of biodiversity. That is, whether a city is in Europe or Australia, more natural green space conserves more species in the city.”

Katti explained the bias towards Europe might cause an underestimation of urban biodiversity. He believes that future research should target additional cities in areas with high biodiversity, such as the tropics, as well as cities near unexplored regions.

The authors stress the importance of the preserving and restoring natural habitats, as well as addressing various other factors affecting species richness and densities. For Aronson, this means that newly developed urban areas missing green spaces should be actively restored to provide habitat for native plant and animal communities. Katti encourages urban bee-keeping and the planting of native species that support pollinators.

According to Katti, in addressing the various factors that affect species densities and richness, such as the age of a city, its amount of green spaces and the presence of invasive species, prioritization of habitat by city planners is key to the conservation of urban biodiversity.

“Cities often have many open spaces used by people for a variety of purposes including industrial, commercial, cultural, and recreational activities, as well as abandoned so-called brown fields which can be restored,” Katti said. “A big step has to be: changing the mindset of planners and developers so they think of cities as habitats which can support other species not just for conservation, but for also improving human quality of life through the many benefits from well-functioning urban ecosystems.”

Next big idea in forest conservation? Connecting deforestation to disease

(04/03/2014) Thomas Gillespie is concerned with the connections between conservation and disease, with a particular emphasis on primates. Much of his research examines the places where humans and animals are at a high risk of exchanging pathogens, and how human-caused disturbances, such as deforestation, can change disease dynamics and impacts.

(03/31/2014) The South American Amazon rainforest is renowned for being one of the most biodiverse ecosystems on the planet, boasting an estimated 16,000 different tree species. However, the distribution of these diverse tree species is curiously uneven. What is the reason behind this irregular diversity? According to a new study, the answer lies within short durations between tree generations.