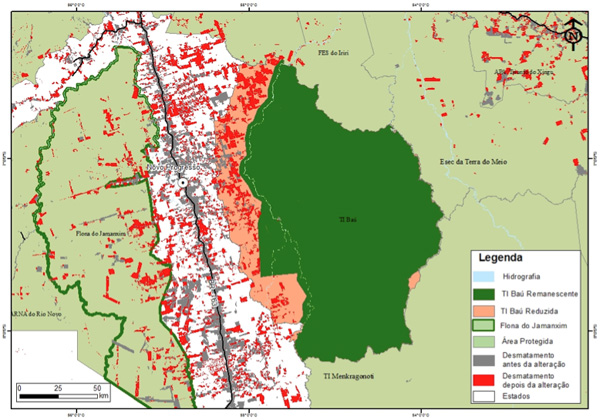 Areas that have had their protected status removed or reduced have experienced a sharp increase in forest loss thereafter, finds a new study published by Imazon, a Brazilian NGO.

The research looked at ten protected areas that were degazetted due to encroachment, dams, and roads. It found that deforestation increased an average of 50 percent within five years after loss of protection.

Imazon said that 38 reserves lost their protected status beyond 1998 and 2013. The net loss equated to 2.5 million hectares.

The study found that the most common reason for unprotecting a protected area was illegal occupation, usually by speculators and ranchers aiming to gain “ownership” of the land to sell it to developers or gain legal title. The second leading cause for degazettement was construction of hydroelectric projects.

“We also show that the construction of dams in the Amazon has led to reduction of protected areas,” said Elis Araujo, a co-author of the study, who added that dams also contribute indirectly to deforestation by attracting large numbers of migrants who encroach into protected areas.