by Mrinalini Erkenswick Watsa on 18 March 2014

We have always been intrigued by the Amazon rainforest with its abundant species richness and untraversed expanses. Despite our extended study of its wildlife, new species such as the olinguito (Bassaricyon neblina), a bear-like carnivore hiding out in the Ecuadorian rainforest, are being identified as recently as last year. In fact, the advent of efficient DNA sequencing and genomic analysis has revolutionized how we think about species diversity. Today, scientists can examine known diversity in a different way, revealing multiple ‘cryptic’ species that have evaded discovery by being mistakenly classified as a single species based on external appearance alone.

Recently, Marcel Caminar and Ron Santiago of the Museum of Zoology at the Catholic University of Ecuador used a combination of genetics, morphology, and acoustics to examine tree frog species (family Hylidae) that were already known to science. In their report in the journal ZooKeys, they investigated a species complex that previously contained two closely related species: the convict tree frog (Hypsiboas calcaratus) and Gunther’s banded tree frog (Hypsiboas fasciatus). 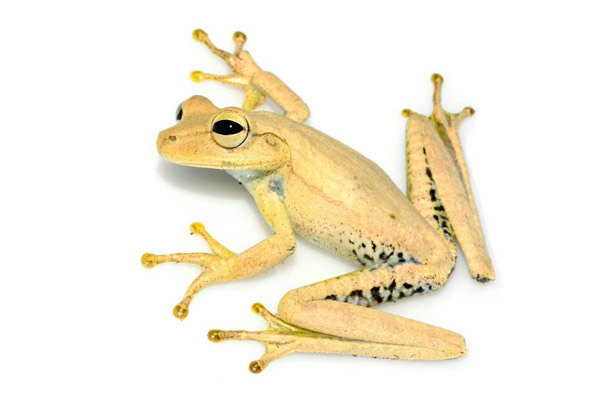 This tree frog, photographed at the Los Amigos Biological Field Station in southeastern Peru, was originally thought to be Gunther’s tree frog, or Hypsiboas fasciatus. Today, scientists will need to review species sightings like this to identify which of the eleven new species it might be. Photo by: Patrick Campbell.

But their research revealed that the morphological, or physical, similarities of the individuals within each species have been masking genetic differences between several subgroups that may actually be considered full species today. In total, Caminar and Santiago revealed eleven potentially new species within the genus Hypsiboas, a five-fold increase in species richness.

For several hundred years, explorers and natural historians have deposited holotypes (or first specimens) of new amphibian species in museums all over the world upon discovery. Caminar and Santiago identified 170 such adult specimens belonging to Hypsiboas fasciatus and Hypsiboas calcaratus from four renowned natural history museums in Ecuador and abroad, including the Smithsonian in Washington D.C.

They then used a multi-faceted approach to get the most comprehensive view of species differences among their samples. First, they measured various quantifiable morphological traits in each museum specimen. Then they collated previously published genetic sequences to form a larger dataset of genetic information for several key areas in the Hypsiboas genome. They also conducted an acoustic analysis of calls by male frogs of several Hypsiboas species. Together these new analyses revealed a wide variety of species with distinct range distributions across Ecuador and Peru.

Of the eleven potentially new species they think exist today, the authors are certain that at least four are completely new to science, while the others require further sampling.

The first of the four is Hypsiboas almendarizae, or Almendariz’s tree frog. It was named after Ana Almendáriz, an Ecuadorian herpetologist who has studied amphibians and reptiles for over three decades and is the current curator of Herpetology in the Museo de Historia Natural Gustavo Orcés at Escuela Politécnica Nacional del Ecuador. This species inhabits the eastern slopes of the Ecuadorian Andes at altitudes ranging from 500 meters to 1,950 meters (1,600-6,300 feet). Given that over 30 percent of its meager range of 15,000 square kilometers in Ecuador is degraded by human activities, the authors have suggested that it be given a conservation status of Near Threatened, based on the IUCN Red List criteria.

Hypsiboas maculateralis, or the stained tree frog, was named for the brown dark blotches on its flanks. These frogs can be found in Ecuador and Peru, at elevations lower than 350 meters (1150 feet), and have a relatively stable species range of 209,000 square kilometers.

Hypsiboas alfaroi, or Alfaro’s tree frog, was named for Eloy Alfaro Delgado, a former Ecuadorian president and leader of the liberal revolution in Ecuador.

“His government promoted the separation between church and state and the modernization of Ecuador by supporting education and large-scale systems of transportation and communication,” write the authors in the study. Alfaro’s tree frog can be found on the border between Ecuador and Peru over a large range of forest, and is also relatively unthreatened.

The final new species is Hypsiboas tetete, or Tetete’s tree frog. It was named in honor of the Tetete, an indigenous group that inhabited the Colombian and Ecuadorian Amazon before their decimation by the 1970s due to the rubber boom.

“Its recent disappearance parallels the destruction of increasingly large areas of forest in the Ecuadorian Amazon with the ensuing decline of biodiversity,” note the authors, reflecting on the corresponding Endangered status of this frog. Tetete’s tree frog can be found in only 2,950 square kilometers of Ecuadorian rainforest.

Increasing the number of species in a given genus of frogs implies that each species now has a smaller range of distribution than previously attributed to the group. According to Santiago, each newly discovered species would now have a higher extinction probability.

Such findings have conservation repercussions for species that have not been evaluated in terms of their genetic diversity or stability. What could appear to be a viable population might indeed be several distinct species, similar enough to the human eye to have evaded detection before the age of advanced molecular analyses.

“If our results are typical of Amazonian amphibians,” says Santiago, “a large scale reassessment of their conservation status and geographic distribution will be required.”

(01/27/2014) Sea anemones are supposed to sit on the bottom of the ocean, using their basal disc (or adhesive foot) to rest on a coral reef orsand. So, imagine the surprise of geologists in Antarctica when they discovered a mass of sea anemones hanging upside from the underside of the Ross Ice Shelf like a village of wispy ghosts. The researchers weren’t even there to discover new life, but to learn about south pole currents through the Antarctic Geological Drilling (ANDRILL) Program via a remotely-operated undersea robot.