Trees left standing after deforestation have a discernible impact on the composition of local biodiversity in secondary growth forests, according to a new study published in PLOS ONE. Researchers working on the Osa Peninsula in Costa Rica discovered that remnant trees could affect species composition of regenerated forests up to 20 years after being logged.

When land that was once forest is abandoned after being cleared for timber or agricultural purposes, what emerges is known as a second-growth forest. Such “secondary forests” currently account for the majority of woodland in Europe and the U.S. and increasingly in the tropics as old-growth forests are lost. Ecologists have long suspected that remnant trees left over from original forests–often found in clusters known as “tree islands”–aid and accelerate the growth and development of secondary forests by altering soil chemistry, producing seeds and attracting small animals that disperse the seeds.

A team of scientists, including Manette Sandor and Robin Chazdon from the University of Connecticut, monitored the biodiversity of small plots of land in a secondary-growth forests that had previously been cleared for cattle pastures. By examining aerial photography and interviewing locals, the researchers were able to ascertain that the areas of woodland were approximately 20-years-old and had been farmed for 20 to 30 years before secondary growth occurred. The researchers chose ten remnant trees visible in old aerial photographs, each 50 meters from the edge of the old growth forest. Then they monitored plots of land around the trees, comparing these plots to others in secondary-growth forests that did not have remnant trees left over.

After monitoring the biodiversity of the plots, the researchers discovered that the areas without remnant trees housed 40 fewer species. Chazdon attributes this to the “ecological memory” of the left over trees.

According to Chazdon, there is a worrying trend happening on the Osa Peninsula where farmers are removing forests to make way for pineapple cultivation, an important part of Costa Rica’s rural economy.

“This is concerning because we see a reduced potential for natural forest regeneration in this region, when pineapple ceases to become the preferred land use [and the land is left to revert back to forest],” Chazdon said. 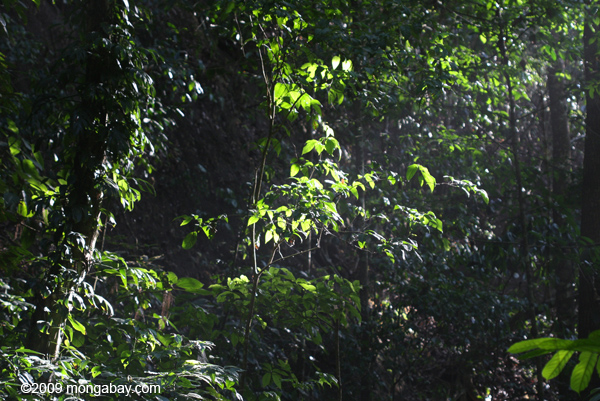 Rainforest in the Osa Peninsula of Costa Rica. Photo by Rhett A. Butler / mongabay.com

The negative effects of pineapple cultivation on the landscape can last longer than cattle farming and ultimately make it more difficult for the land to be reforested. Unlike land used as a plantation, once the cattle are removed forests can quickly and easily return.

“We now know that forests can grow on former pastures with no intervention other than removing cattle, even when they have few or no remnant trees,” Chazdon added. “But pineapple is likely to be another story, and will likely require costly interventions to reforest. Pineapple production involves tilling soil (ploughing), levelling soil, clearing all forms of remnant vegetation, heavy use of pesticides, and often involves very large areas that are isolated from forest fragments. All of these factors would limit forest regeneration if the farm is abandoned. So restoring forest on a former pineapple plantation also requires restoring soil biota and planting trees.”

(01/23/2014) Secondary forests, which are areas that were previously cleared of old-growth cover, now comprise the majority of the forested areas in the United States, Europe, and elsewhere. A heavily debated issue is to what extent secondary forests are able to contribute to the preservation of biodiversity. In an article published in PLOS ONE, a group of researchers from the Smithsonian Tropical Research Institute led by Michiel van Breugel evaluated the biodiversity preservation potential of secondary forests.

(01/09/2014) Worldwide, large swaths of land lay barren in the wake of agricultural expansion, and as global forest cover continues to decline, carbon and water cycles, biodiversity, and human health are impacted. But efforts to restore abandoned pastures and agricultural plots back into functioning forest ecosystems are often hindered by high costs and time requirements. Fortunately, scientists have developed a new method for a more cost effective solution to forest restoration, the establishment of ‘tree islands.’

Rodents have lowest diversity in primary forests in the Congo

(09/17/2012) For many animal families, diversity and abundance rises as one moves away from human-impacted landscapes, like agricultural areas, into untouched places, such as primary rainforests. However, a new study in mongabay.com’s open access journal Tropical Conservation Science, shows that the inverse can also be true. In this case, scientists working in the Democratic Republic of Congo’s (DRC) Maskao Forest found that both rodent diversity and abundance was lowest in primary forest.

(03/19/2012) Given their often tiny size and cryptic nature, how does one determine frog populations in the rainforest? Just eavesdrop. A new study in mongabay.com’s open access journal Tropical Conservation Society (TCS) employed automated recorders to listen to amphibian calls to determine if the common tink frog (Diasporus diastema) could be found in recovering secondary forests in Costa Rica.