by Mrinalini Erkenswick Watsa on 11 March 2014

In 2006, Mexico intensified its security strategy, forming an inhospitable environment for drug trafficking organizations (also known as DTOs) within the nation. The drug cartels responded by creating new trade routes along the border of Guatemala and Honduras. Soon shipments of cocaine from South America began to flow through the Mesoamerican Biological Corridor (MBC). This multi-national swathe of forest, encompassing several national parks and protected areas, was originally created to protect endangered species, such as Baird’s Tapir (Tapirus bairdii) and jaguar (Panthera onca), as well as the world’s second largest coral reef. Today, its future hinges on the world’s drug producers and consumers.

Recently, a report in the journal Science by seven researchers working in Central American forests examined the effects of Mexican drug policies on the MBC, urging policy makers to target ecological devastation as an unintended consequence of a skewed emphasis on supply-side drug reduction policies. They highlight this unfortunate side effect of Mexico’s successful law enforcement: the deforestation of pristine areas within smaller countries like Honduras and Guatemala, ill-prepared for an influx of drugs.

There is growing evidence for a correlation between drug trafficking and deforestation in Central America today. After 2006, DTOs chose their new trade routes with care. They preyed on the remote forest frontiers of Guatemela’s Petén region and eastern Honduras, which were thinly populated with only minimal state presence, where local stakeholders did not have a loud voice. Here, the Science report suggests that drug trafficking has compounded existing problems such as weak governance, conflicting property regimes, high poverty, illegal logging, and agribusiness expansion.

The study used data from the Organization of American States’ 2013 report titled Drug Trafficking in the Americas to correlate forest loss with the number of primary cocaine movements in three affected departments in eastern Honduras – Gracias a Díos, Colón, and Olancho. Combined, this area covers almost 50,000 square kilometers or approximately 44 percent of the entire country of Honduras. The United Nations Office on Drugs and Crime (UNODC) reports a total of 52 clandestine airstrips detected by the Honduran Armed Forces in the months of February and March of 2012 in these three departments alone.

Exact data, however, are hard to collect when it comes to the drug trade, mediated by the inherent risk to observers in narco-zones, as well as the high levels of illegal activities and violence associated with the narcotics trade. But the UNODC report found that primary movements of cocaine occurred both by air and sea, and included events detected by radar, transfers intercepted by authorities, and reports by reliable intelligence that were unconfirmed by arrests.

Forest loss in eastern Honduras was discovered to have increased nearly seven times from 2007 to 2011, with a corresponding five-fold increase in primary cocaine movements.

“When drug traffickers moved in,” reported Kendra Sweeney, the lead author of the study who has spent over 20 years working in Honduras, “they brought ecological devastation with them.”

Forest burning on Roatan Island in Honduras. Photo by Rhett A. Butler.

Scientists identified three mechanisms by which forest loss occurs soon after the establishment of a drug hub. First, forests are mowed down for clandestine roads and landing strips to receive primary shipments of cocaine. For instance in 2011, UNESCO listed the Honduran Río Plátano Biosphere Reserve as a World Heritage in Danger for its high narco-presence, as evidenced by multiple illegal landing strips scattered across the reserve.

The second factor arises when, due to the remoteness of these sites, weak frontiers are suddenly flooded with weapons and cash.

“I would get approached by people who wanted to change $20 bills in places where cash is very scarce and dollars are not the normal currency. When that starts happening, you know narcos are there,” said McSweeney in a press release.

Indigenous smallholders, referred to as “key forest defenders” in the study, find themselves dispossessed of their lands and powerless in the face of so much money.

Finally, profits from drug trafficking cannot be declared as income and thus must be laundered. Drug cartels often get around this by purchasing remote land and clearing it, allowing them to convert drug-money into legalized private property without leaving a trail. Large ranches or narco-estates formed by deforestation, often masquerade under the fronts of agriculture and oil palm plantations. Land titles are falsified, government officials bribed, and ultimately, such land becomes legalized when unsuspecting legitimate corporations purchase it from “locals” as an agricultural investment.

“The result,” conclude the authors in their article, “is [the] permanent conversion of forests to agriculture.”

Drug Policies Should be Conservation Policies

The United States’ “War on Drugs”, a term coined by Richard Nixon who declared that drug abuse was “public enemy number one” in 1971, is a combined effort of justice systems and the military to clamp down on the illegal drug trade. The Obama administration has strayed away from using this term, preferring to see drug addiction as a disease that can be prevented and cured.

The UNODC also supports a change in how drug-control is approached, arguing that the drug problem is a hemispheric issue, with demand restricted largely to the northern hemisphere supplied by production sites in the southern hemisphere. The UNODC suggests that a public health approach is necessary to address drug use, with no blanket strategy appropriate for all countries involved.

McSweeney and colleagues point out that eradication policies in the context of growing plants like coca, opium or marijuana, have forced growers to retreat into remote ecosystems that can ill-afford to face such threats. However, this same “balloon effect” has not been examined in much detail in the context of drug transportation. The authors argue that drug interdiction efforts could conceivably exacerbate pressures on remote forests, instead of relieving them.

For example, a successful interdiction program in 2012 in eastern Honduras caused levels of primary shipments to drop below 2008-levels. Unfortunately, as with Mexico before it, drug cartels have since moved their operations from Honduras to areas in eastern Nicaragua, impacting new forests and leaving behind a scarred ecosystem.

McSweeney and the other authors urge policy makers to consider conservation and drug trafficking together in order to mitigate the effects of narco-trafficking on fragile Central American ecosystems.

“Drug policies are also conservation policies, whether we realize it or not,” McSweeney said. “U.S.­led militarized interdiction, for example, has succeeded mainly in moving traffickers around, driving them to operate in ever­more remote, biodiverse ecosystems. Reforming drug policies could alleviate some of the pressures on Central America’s disappearing forests.” 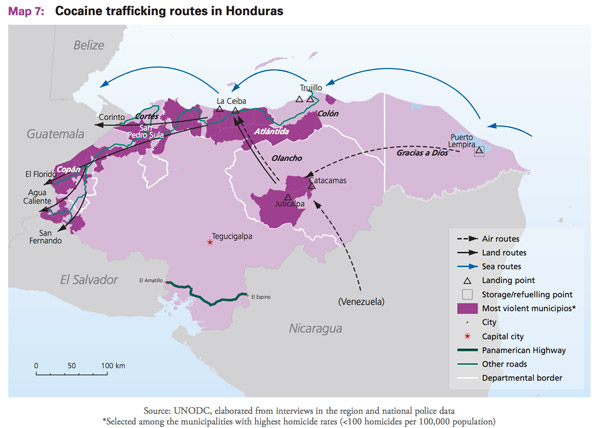 (02/25/2014) A new study has quantified a point long advocated by advocates of setting aside protected areas: ecotourism pays. The research, published in Proceedings of the National Academy of Sciences (PNAS), finds that communities neighboring conservation areas in Costa Rica had lower rates of poverty relative to other areas.