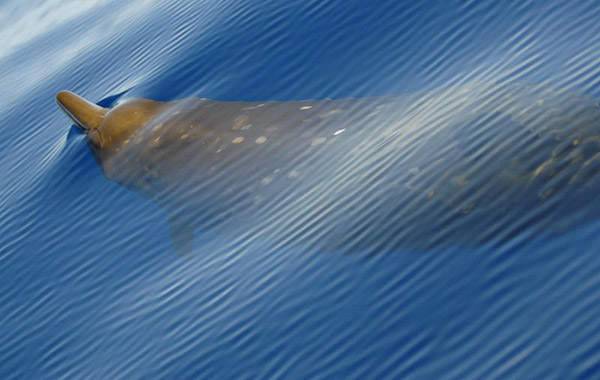 Researchers have described a new beaked whale species. The beaked whale family, so-called for their dolphin-like beaks, are among the world’s least known mammals. This photo shows a Blainville’s beaked whale (Mesoplodon densirostris). Photo by: NOAA.

Beaked whales are incredibly elusive and rare, little-known to scientists and the public alike—although some species are three times the size of an elephant. Extreme divers, beaked whales have been recorded plunging as deep as 1,800 meters (5,900 feet) for over an hour. Few of the over 20 species are well-known by researchers, but now scientists have discovered a new beaked whale to add to the already large, and cryptic, group: the pointed beaked whale (Mesoplodon hotaula).

“[Beaked whales] are rarely seen at sea due to their elusive habits, long dive capacity and apparent low abundance for some species,” says the study’s lead author, Merel Dalebout, with the University of New South Wales. “Understandably, most people have never heard of them.”

Given this, the new species is not based on living animals, but rather a series of seven whale carcasses from stranded individuals over the last 50 years. The pointed beaked-whale was actually initially proposed in 1963 as a new species by P.E.P Deraniyagala, but two years later was lumped together with the related, gingko-toothed beaked whale (Mesoplodon ginkgodens).

“Now it turns out that Deraniyagala was right regarding the uniqueness of the whale he identified. While it is closely related to the ginkgo-toothed beaked whale, it is definitely not the same species,” says Dalebout. 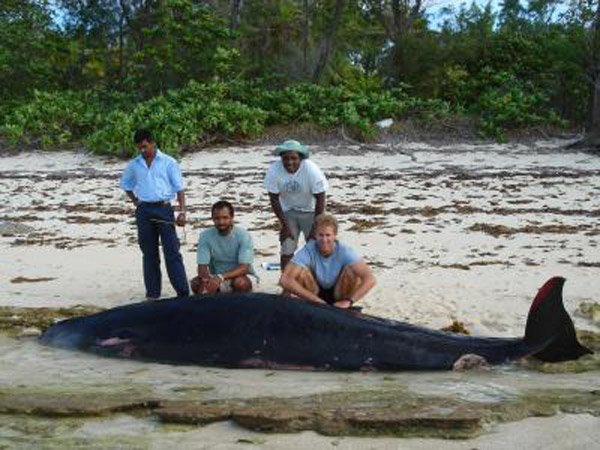 Male specimen of the new species that washed up on Desroches Island in the Seychelles in 2009. Photo by: Lisa Thompson.

Dalebout and her team were able to prove this with something Deraniyagala didn’t have: DNA results. They retrieved quality DNA samples from the tissue of a single specimen while acquiring short fragments of DNA by drilling into the bones of others. In addition, the whales are also distinguished based on morphological (physical) features. It is also thought, based solely on strandings that gingko-toothed beaked whale tends to stick to temperate regions, while he pointed beaked whale is found mainly in the tropics. The pointed beaked whale is also found in the Indian and Pacific Oceans, while the gingko-toothed beaked may only be found in the Pacific.

“A number of species in this group are known from only a handful of animals, and we are still finding new ones, so the situation with Deraniyagala’s whale [the long-beaked whale] is not that unusual,” Dalebout says. “For example, the ginkgo-toothed beaked whale, first described in 1963, is only known from about 30 strandings and has never been seen alive at sea with any certainty. It’s always incredible to me to realise how little we really do know about life in the oceans. There’s so much out there to discover. ”

A 2006 study looking at the diving habits of two species of beaked whale—Cuvier’s beaked whale (Ziphius cavirostris) and the Blainville’s beaked whale (Mesoplodon densirostris)—gives a small sense of the remarkable mysteries of these almost entirely-unknown family of whales.

“They hunt by echolocation in deep water between 222 and 1,885 meter, attempting to capture about 30 prey/dive. This
food source is so deep that the average foraging dives were deeper (Zc: 1070·m; Md: 835·m) and longer (Zc: 58·min; Md: 47·min) than reported for any other air-breathing species,” the researchers wrote in The Journal of Experimental Biology.

Almost nothing is known about the populations and conservation-issues of beaked whale. In fact, of the 22 species only 2 have been adequately assessed by the IUCN Red List, both considered Least Concern. The others are all listed as Data Deficient.