by Dyna Rochmyaningsih on 14 February 2014 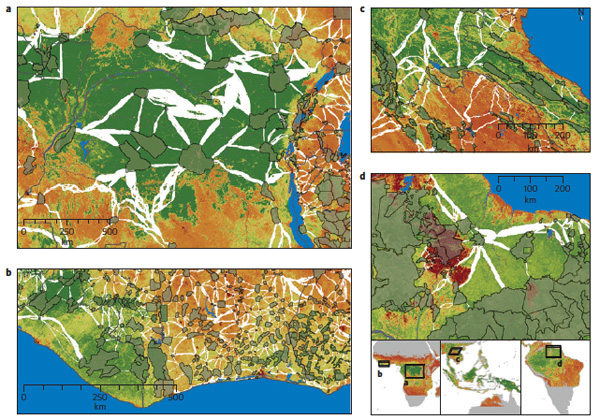 Corridors passing through the densest VCS between protected areas. a–d, Central Africa (a), western Africa (b), southeast Asia (c) and the Guiana Shield (d). Corridors are shown in white, protected areas in semi-transparent grey and VCS as a gradient from low density in red to high density
in green. Courtesy of Nature Climate Change.

Patrick Jantz and colleagues from the Woods Hole Research Center created a map showing potential corridors in Africa, South America, and Southeast Asia. They calculated these corridors cover about 15% of total unprotected aboveground carbon in the tropics and, in some cases, store larger amounts of carbon than the protected areas they connect.

These connecting areas, known as habitat corridors, provide safe routes for species to migrate in response to food availability, climate change and other factors, increasing the ecological connectivity between protected areas. But these high carbon-connecting areas are often overlapped by human activities and thus vulnerable to degradation.

“Some of the corridors are touched with human activities and economic interest so we did an analysis to determine which areas are the most important ones to be protected,” says Jantz.

This analysis is based on three criteria for defining corridors: (1) high carbon stocks, (2) high biodiversity, and (3) low economic opportunity costs. According to the authors, the areas that meet these criteria should then be prioritized in REDD+, a UN-program to cut greenhouse gas emissions from forest loss and degradation while supporting biodiversity and sustainable development in developing countries.

“The beauty of what we’ve done is not only identifying the optimal corridors for connectivity, but also identifying where to focus and get the most for a given investment,” said Scott Goetz. “We’re making the data sets publicly accessible via Google & ESRI.” 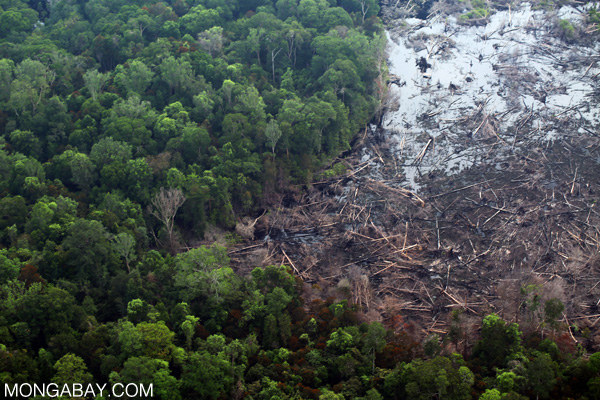 Deforestation in a peatland area in Riau, Indonesia

Louis Verchot, Research Director and Forest and Environment from Centre for International Forestry Research (CIFOR) says that this research is timely because countries are still developing strategies for REDD+ itself and there is a good chance that corridors can be included in REDD+ design.

“This research alerts countries to the possibility of integrating wildlife corridor maintenance and enhancement into their plans as a means of achieving multiple objectives through these efforts,” said Verchort.

According to Verchort, in many places in the world, corridors are not well protected. For example, the human population density has increased sharply in Kenya’s Rift Valley, a traditional migration pathways of elephants between the Aberdaires Mountains and Mt. Kenya. As a result, the pathways have been cut off and there are increasing incidences of conflicts between elephants and subsistence farmers.

“If REDD+ funds could be channeled to establishing, enhancing and protecting corridors and managing the human tradeoffs, these conflicts could be reduced,” he added.

“There is no specific focus on corridors in our REDD+ design but it is very possible to include them in our projects,” said Wibisono, adding that the Heart of Borneo, an intergovernmental project between Indonesia, Malaysia, and Brunei that protects rainforest in Borneo, could provide an example of the feasibility of maintaining habitat connectivity.