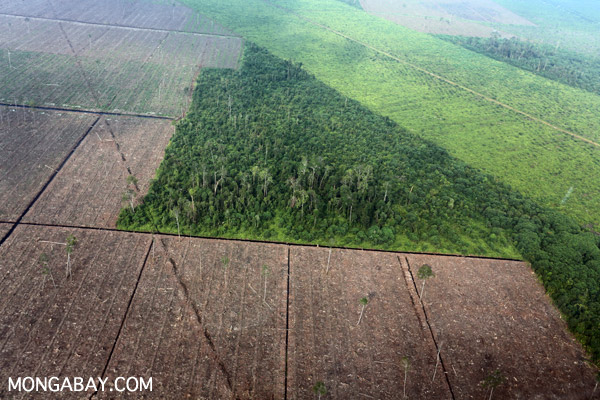 Deforestation in Riau Province, Indonesia. Photo by Rhett A. Butler.

An ambitious plan to save the world’s tropical forests by valuing them for the carbon the store may fail to reduce deforestation unless governments and multilateral institutions significantly scale up financial commitments to the program, argues a new report published by the Global Canopy Programme, the Amazon Environmental Research Institute, Fauna & Flora International, and UNEP Finance Initiative.

The report, released last week, looks at the projected gap between supply and demand for emissions reductions generated under the Reducing Emissions from Deforestation and Degradation program (REDD+). It finds that if an E.U. target for a 50 percent reduction in tropical deforestation by 2020 is to be met, current commitments would effectively fund only three percent of that amount, leaving a shortfall of 97 percent. That means developing countries would see only a fraction of the financial incentive they would otherwise expect for cutting deforestation before 2020, when REDD+ emissions reductions could start being used to meet compliance obligations.

“There is currently no source of demand that will pay for medium to long-term emission reductions from REDD+ in the period between 2015 and 2020,” states the report. “This problem seriously threatens the successful implementation of REDD+, because without interim demand there will be little or no incentive for forest countries to participate and redirect resources towards REDD+, or for the private sector to invest.”

“Large-scale demand for REDD+ emission reductions is expected to materialize only after a global compliance market comes in to existence, under the auspices of UNFCCC, in the year 2020,” said Nick Oakes, Finance Programme Manager at the Global Canopy Programme, in a statement. 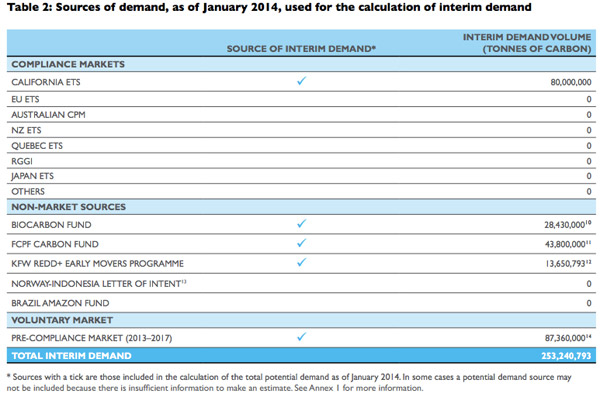 The report makes a case for a suite of near-term interventions, including donor governments buying billions of dollars in REDD+ emissions reductions, setting a price floor for REDD+ credits to reduce uncertainty and encourage private sector investment, and providing loans. It says financial and technical assistance could be provided through existing multilateral funds, like those managed by the World Bank, and new public private partnerships.

“Without a financial incentive in the interim period, tropical forest countries and the private sector have little motivation to invest the necessary political, human and financial capital in REDD+. Funding therefore has to be scaled up rapidly, to provide incentives in the fast-approaching interim period,” states the report. “A performance-based financial incentive, providing clear price signals to all counter-parties, will improve the risk-return profile of REDD+ investments, leverage private sector capital, match the goals of global REDD+ policy with the scale of funding needed to achieve those goals, and retain the political momentum of forest country governments.” 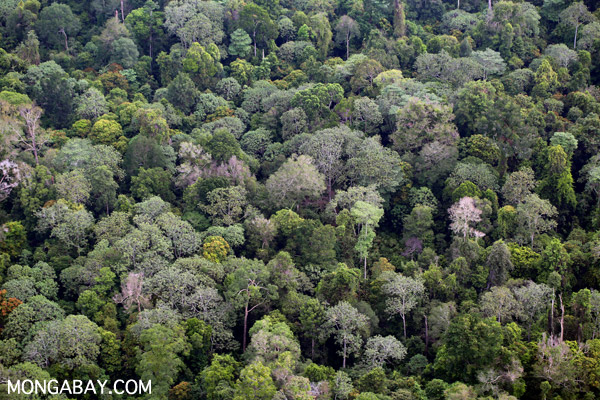 Rainforest in Sumatra. Photo by Rhett A. Butler.

Deforestation and forest degradation account for roughly a tenth of carbon emissions from human activities. A handful countries — Brazil, Indonesia, Democratic Republic of Congo, and Malaysia — account for the bulk of emissions from tropical forest loss.

REDD+ has been under development for the better part of a decade. The concept gained momentum during 2005 climate talks in Montreal, advanced during the 2007 COP in Bali, and was officially approved during negotiations in Poland last November.