New research published in Nature adds further evidence to the argument that drought and fire are reducing the Amazon’s ability to store carbon, raising concerns that Earth’s largest rainforest could tip from a carbon sink to a carbon source.

Using aircraft to capture samples above the Amazon across four sites on a bi-weekly basis for two years, an international team of researchers found that Amazon forests are roughly carbon neutral in wet years, but become carbon sources in dry years due to slower growth and increased incidence of fires.

“Amazonia is changing: We are observing more very wet years and more very dry years,” said John Miller, of NOAA’s Cooperative Institute for Research in Environmental Sciences (CIRES) at the University of Colorado Boulder. “If these trends continue, the region may become a net source of carbon to the atmosphere, moving carbon embedded in ecosystems into the atmosphere as greenhouse gas, thus accelerating global warming.”

The results are based on a comparison between 2010 — a year of extreme drought — and 2011, a wet year. In 2010, fires released some 500 million metric tons of carbon into the atmosphere, some 200 million more tons than 2011, while sequestering less CO2 due to depressed photosynthetic rates, a product of less water availability. In other words, during dry 2010 the Amazon exhaled deeply, while in wet 2011 it inhaled slightly. 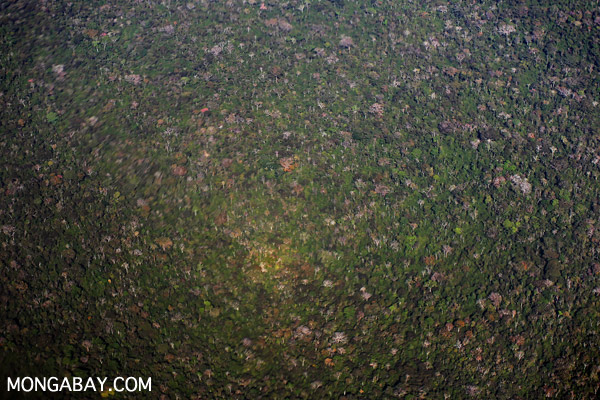 While the results are consistent with other research, it is “the first time we have observed the Basin-wide carbon balance during a very dry and a wet year,” according to co-lead author Emanuel Gloor of the University of Leeds.

The results could provide some indication of what to expect the future in terms of the climate implications of warmer and drier conditions.

Co-lead author Luciana Gatti of the Instituto de Pesquisas Energeticas e Nucleares in Sao Paulo, Brazil added that further study would help clarify whether the trend holds beyond the two years of observations.

“We need to understand how sensitive these ecosystems are to climate change and the potential for feedbacks that could further affect our climate,” she said in a statement. “A longer-term effort will be needed to fully understand the future carbon balance of the region.”