Police in Indonesia’s Aceh province have arrested two wildlife trafficking suspects allegedly behind five tiger poaching rings operating in the forests of northern Sumatra. The arrests followed a months-long investigation and an undercover sting operation in which police seized thousands of dollars worth of illegal animal parts.

Posing as potential buyers, undercover police caught the suspects with stuffed Sumatran tigers and other illegal wildlife including a clouded leopard, two golden cats and a sun bear skin. Aceh Police Criminal Investigation Director Joko Irwanto estimated the confiscated animals to be worth hundreds of millions of rupiah, roughly tens of thousands of dollars.

The suspects were arrested on Jan. 3 under a 1990 conservation law and are believed to be linked to a network of rare animal traders in Aceh’s Gayo Highlands and a known tiger kingpin in Medan. If found guilty, they face up to five years in prison and a fine of Rp 100 million ($8,200). 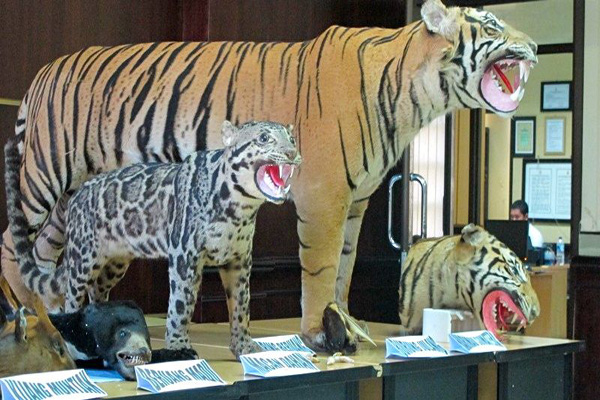 “This recent arrest shows that Indonesia is getting increasingly serious about not tolerating wildlife crime, which threaten its spectacular natural heritage,” said Joe Walston, Asia programs director at the Wildlife Conservation Society, a New York-based conservation organization that assisted with the case.

“We congratulate the group of law enforcement professionals that worked together on a local, regional, and national level to make this important arrest happen.”

Police believe the suspects acquired the rare animals from poachers in and around Central Aceh. The area has a reputation as a center for the illegal wildlife trade, fueled by high demand for stuffed endangered animals throughout Aceh.

“There is mythology that makes people believe that tigers, bears and certain other animals have magical powers,” Azhar, a species coordinator for WWF-Indonesia’s Aceh program office told Mongabay-Indonesia, adding that many local officials in the province have illegal wildlife on display in their homes. 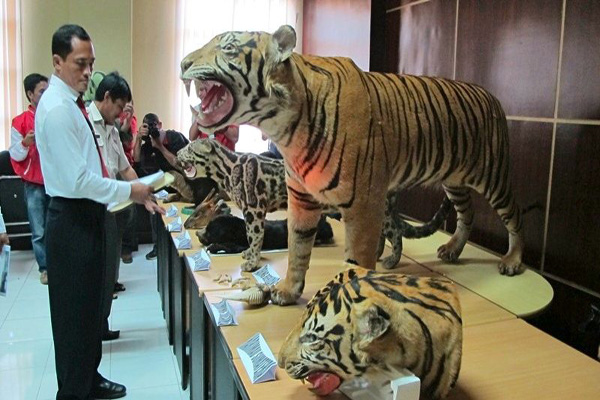 Stuffed animals seized by Aceh police on display at a press conference in Aceh. Photo by Chik Rini of Mongabay-Indonesia..

“WWF urges the government to address the conservation of tigers and other rare species more seriously,” Azhar told Mongabay-Indonesia. “If poaching continues unchecked, [tigers] will go extinct in Aceh.”