The Sunda clouded leopard has always been shrouded in mystery. Only declared a separate species from its mainland cousin, the Borneo clouded leopard, in 2006, the IUCN lists the cat as Endangered. The distinction between the Borneo clouded leopard (Neofelis nebulas) and the Sunda clouded leopard (Neofelis diardi) was made by ground-breaking molecular coding technologies and anatomy studies of the two species. Although it is Borneo’s largest predator, very little is known about the Sunda leopard. As a medium-sized, well-camouflaged and mostly nocturnal animal, the leopard has evaded researchers since its discovery eight years ago.

Recently, two ambitious studies set out to change that. The aim of both was to better protect the leopard by learning more about its movements throughout its habitat. Both studies were quickly released on the organizations’ websites as major press releases. One study, lead by the Orangutan Tropical Peatland Project (OuTrop) conducted an intensive study on populations inhabiting bogs. Another, with the Sabah Wildlife Department, WildCRU and Danau Girang Field Centre, fitted a wild Sunda clouded leopard with a satellite collar to track its movements, marking the first time the species had ever been collared.

The collaring project team captured a male Sunda leopard in Borneo’s Kinabatangan forest. Until then, researchers had to rely on camera traps or sheer luck to catch a glimpse of the cat. After the team weighed and photographed the leopard, it was fitted with a sophisticated satellite collar that will report its movements every 20 minutes for the next four to six months.

“The collaring of this male is part of an intensive satellite tracking program to study the spatial ecology and habitat associations of the Sunda clouded leopard…in the fragmented landscape of the Lower Kinabatangan, dominated by palm oil plantations and highly degraded forest,” wrote Benoit Goossens, who lead the study.

The OuTrop project had similar motivations in mind. In a study from 2008-2012, researchers from OuTrop, WildCRU at Oxford University, the Cardiff School of Biosciences and the Center for International Cooperation in Sustainable Management of Tropical Peatland used 54 camera traps in 27 different locations. During the four years of the study, the researchers captured 90 images of six different Sunda clouded leopards. Although that number may seem small, it surprised the researchers.

“The densities are higher than we were expecting,” lead researcher Susan Cheyne told mongabay.com. “Extrapolating from these density estimates, there could be as many as 247 clouded leopards in the 5,600 square kilometer Sabangau Forest.”

The OuTrop study was based in the Borneo peat-swamp forests, which are flooded for up to nine months the year. 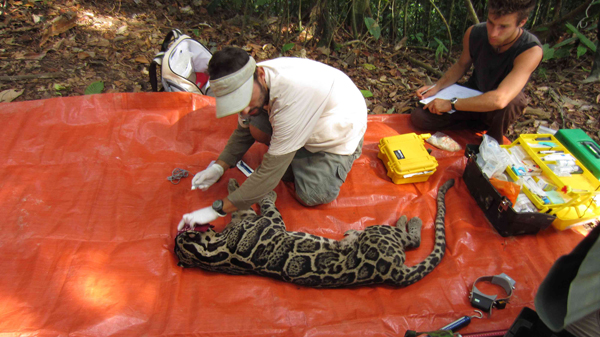 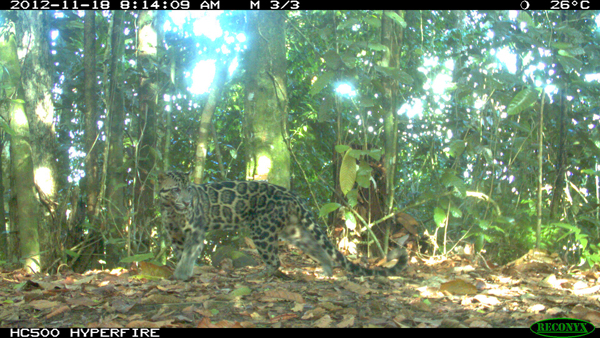 A male Sunda clouded leopard captured on one of the camera traps. Photo by Danau Girang Field Centre.

“No information was known about clouded leopards in this habitat so we wanted to investigate the behavioral ecology and population of this forest,” said Cheyne.

“Due to the large area of peatland forest in Indonesian Borneo, this habitat could support large populations of clouded leopards,” said Cheyne. “But peatland is also targeted by plantation and logging companies so the conservation threats combined with the potential importance of these forests for clouded leopards mean this is crucial habitat.”

Becoming a crucial habitat for the Sunda leopard, an endangered species, means more protection for the peatland habitat, something vital for the survival of the species.

Knowledge is power, and both studies have exciting conservation implications for the future. 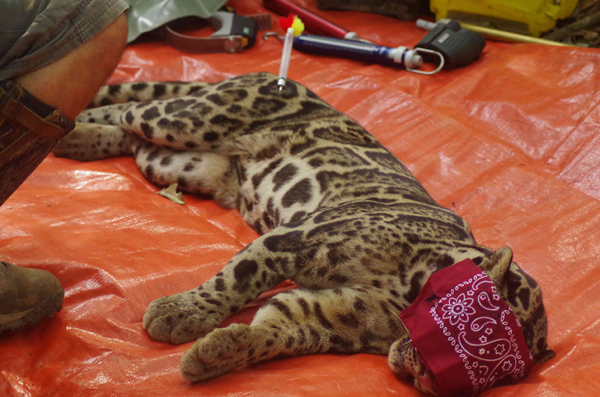 Anesthetized Sunda clouded leopard. Minutes later the animal was revived using a reversal drug and released back into the forest. Photo by Danau Girang Field Centre.

“By better understanding the clouded leopard ecology and habitat, we will be able to unlock some of Sabah’s (a state in Malaysian Borneo) closely guarded secrets about their behavior and how habitat loss and fragmentation have impacted Sabah’s biggest wild cat,” said Sen Nathan, from the satellite collaring program. “We also hope that with more accurate data collected on its home range via satellite collars, we will be able to provide a better management of this beautiful cat in such a modified landscape.”

More than half of the world’s tropical timber products come from Borneo, and enormous swaths of forest are being burned to make room for palm oil plantations. Because they are sparsely populated and regarded as unproductive, peat swamp forests are often the first choice for deforestation. The results of these studies both offer hope and heighten alarm as industrial activities in Borneo increase. 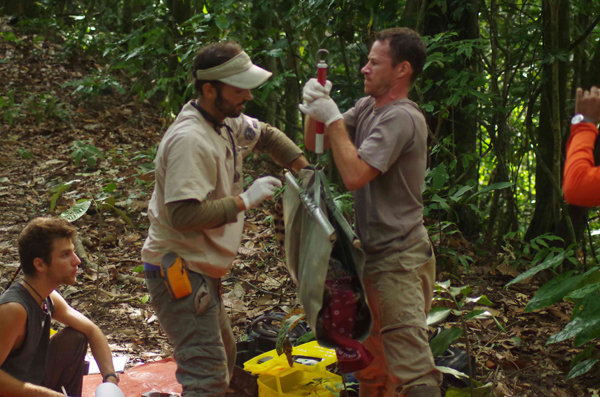 As part of a conservation research study a male Sunda clouded leopard is weighed whilst chemically anesthetized. Photo by Danau Girang Field Centre.

(04/10/2008) Last year two teams of scientists announced the discovery of a new species of clouded leopard in Borneo. The news came as conservationists launched a major initiative to conserve a large area of forest on an island where logging and oil palm plantations have consumed vast expanses of highly biodiverse tropical rainforest over the past thirty years. Now a pair of researchers are racing against the clock to better understand the behvaior of these rare cats to see how well they adapt to these changes in and around Danum Valley in Malaysia’s Sabah state. Andrew Hearn and Joanna Ross run the Bornean Wild Cat and Clouded Leopard Project, an effort that aims to understand and protect Borneo’s threatened wild cats, which include the flat-headed cat (Prionailurus planiceps), marbled cat (Pardofelis marmorata) leopard cat (Prionailurus bengalensis) the endemic bay cat (Catopuma badia) and the Bornean clouded leopard (Neofelis nebulosa).