The rhinoceros is one of the largest and most iconic animals to roam the earth. However, poaching for their horn, erroneously believed to have medicinal value, has led the IUCN Red List to classify three of the world’s five species as Critically Endangered. But, a new consumer report by the wildlife trade monitoring network, TRAFFIC, finds that rhino horn consumers in Vietnam buy the illegal product as much to raise their social status as to attempt to treat a fever or hangover.

Rhino horn consumed in Vietnam is largely the result of poaching in South Africa, which houses the world’s largest number of rhinos. According to Save the Rhino International, there have been 790 rhinos poached in South Africa in 2013 (as of October 25), which is an increase from 668 in 2012 and 448 in 2011. China and Vietnam are the primary markets of rhino horn, and many consumers are willing to pay large sums for powdered rhino horn.

Greater one-horned rhino (Rhinoceros unicornis) with its horn sawed off. Photo by Rhett A. Butler / mongabay.com

“In Africa, poaching of rhinos is primarily to meet the demand in Asia with many poachers being enticed to engage in poaching because they are being offered financial reward for the horns that is much higher than their usual income,” explained Naomi Doak of TRAFFIC.

In the first large-scale study of its kind in Vietnam, the consumer research interviewed a total of 720 individuals from Ho Chi Minh City and Hanoi, Vietnam’s two largest cities. The findings added insight into why Vietnamese consumers really buy illicit rhino horn. While many studies and news reports have noted that people use rhino horn for its supposed medicinal values, the report reveals that a combination of both perceived medicinal benefits and improved social status are driving booming rhino horn consumption in Vietnam.

“Across Asia, the reasons for consumption of rhino horn have differed,” said Doak. “In traditional medicine, it is believed that rhino horn can reduce fever, enhance one’s health and address a number of ailments. Since rhino horn is an expensive product in the illegal market, it has also become a symbol of wealth and power.”

The findings from the report were subsequently used to inform efforts to identify key consumer groups and aided the building of a picture of a fictional but typical consumer—
a male, 48-years-old, married, with two children around 20-years-old, who buys rhino horn to provide a sense of wealth, power, social status and hard work. According to the research, this typical consumer values success in his career, financial security, family preservation and social status—which make him vulnerable to outside influences. Above all, he believes using rhino horn gives him peace of mind and happiness. The report also generalizes these consumers as unaware of their impacts and ambivalent about the possibility of rhino extinctions, as it does not directly impact them. Many others are not even aware that rhinos have been illegally killed. 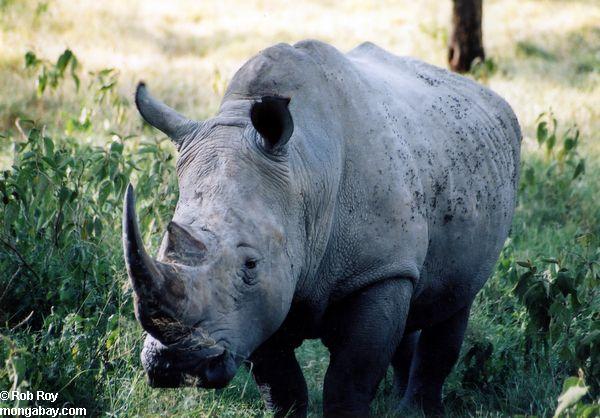 “I would say very few of us stop to think where our TVs or our new cars come from or all the impacts producing these things has on species and the environment,” said Doak. “Unfortunately it tends to be usual for us not to think about this until we reach a point where we become aware that our consumption might impact a particular species or habitat… even then we might not actually change our behavior or our level of consumption.”

This report predicts that as Vietnam’s middle class grows, so will the number of rhino horn consumers. Sixteen percent of the people surveyed that are not currently consumers of rhino horn are labeled as “intenders,” or people who plan to use or buy rhino horn in the future.

TRAFFIC and WWF Vietnam have plans to kickoff an evidence-based behavior change campaign to target the key consumer groups.

“By working on activities and actions to address demand, Vietnam can work alongside South Africa where efforts are being made to reduce poaching; by battling the problem on both sides we are confident that we can find a solution to the current poaching crisis while also address the underlying drivers of the current demand,” Doak stated.