California ‘sea monster’ is an oarfish

The dead “sea monster’ spotted off the coast of Southern California on Sunday is actually an oarfish, a deepwater fish species that can reach a length of 55 feet (17 meters).

The 18-foot-long carcass was sighted by Jasmine Santana, a marine science instructor at the Catalina Island Marine Institute (CIMI), while snorkeling in during a staff trip in Toyon Bay at Santa Catalina Island. Santana alerted her colleagues, who helped her bring the unusual creature ashore.

“We’ve never seen a fish this big,” Mark Waddington of CIMI was quoted as saying by the Associated Press. “The last oarfish we saw was three feet long.” 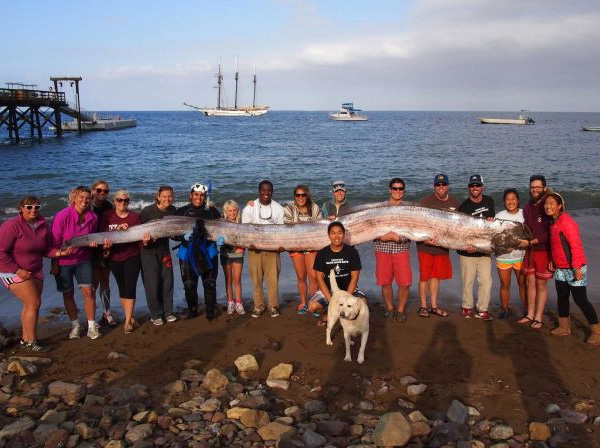 After posing for pictures with the oarfish, the organization sent tissue samples and video to biologists at the University of California, Santa Barbara. The carcass is currently on display for students studying at CIMI but will soon be buried until it decomposes. Its skeleton will be eventually reassembled for exhibit, according to Waddington, who is the captain of CIMI’s sailboat, the Tole Mour.

Diving to depths greater than 3,000 feet, oarfish are most often seen coming into shallow waters to die or washed up dead on beaches. Scientists believe creature, which sports dorsal fins that run the length of its back, is likely responsible for sea serpent legends.

The oarfish can reach lengths of 55 feet (17 meters), making it the world’s longest bony fish. It is infrequently caught by fishermen, but in 2010 researchers using a remotely operated vehicle (ROV) in the Gulf of Mexico filmed a oarfish alive in the wild for the first time.

(07/15/2013) Let’s go back some 14,000 years (or up to 50,000 depending on who you talk to), since this is the first time humans encountered the meandering, seemingly endless river system of the Amazon. Certainly, the world’s first Amazonians would have been astounded by the giant beasts of the region, including ground sloths and mastodons (both now extinct), as well as giant anteaters, armadillos, and tapirs, currently the biggest land animal on the continent. But these first explorers might have been even more surprised by what dwelled in the rivers: anaconda, caiman, and the arapaima. Wait, the what?

(01/08/2013) Last summer, after 55 dives, three scientists in a submarine off the coast of Japan encountered an animal people have mythologized and feared for thousands of years: the giant squid. According to the researchers with Japan’s National Science Museum they managed to capture the first footage ever (see below) of a giant squid in its natural habitat, although photos were also released in 2005 of a giant squid feeding.

(01/24/2007) A rare frilled shark was captured live by fishermen off the coast of Japan. The toothy eel-like creature was taken to Awashima Marine Park in Shizuoka where it later died according to Reuters.