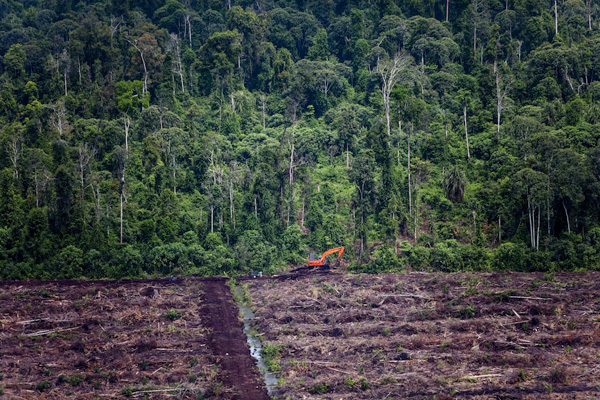 Conversion of forests for palm oil production now appears to be the single largest driver of deforestation in Indonesia, accounting for roughly a quarter of forest loss between 2009 and 2011, asserts a new Greenpeace report that accuses the sector’s main certification standard of failing to stop forest destruction.

The report, titled Certifying Destruction, uses satellite imagery, government concession data, field investigations, and third party analysis to conclude that several recent and current members of the Roundtable on Sustainable Palm Oil (RSPO) — the industry’s chief eco-certification body — are continuing to buy or trade palm oil produced via the conversion of rainforests and carbon-dense peatlands in the Southeast Asian nation.

“The RSPO wants its members to be industry leaders in sustainability, but its current standards leave them free to destroy forests and drain peatland,” said Bustar Maitar, head of Greenpeace International’s Indonesia forest campaign, in a statement. “Year after year, Indonesia’s forest fires and haze wreak havoc on the region, and the palm oil sector is a main culprit.”

Analyzing satellite data, Greenpeace finds that some 300,000 hectares of forest were cleared for oil palm plantations between 2009 and 2011, accounting for nearly 25 percent of the 1.24 million hectares of forest the Indonesian government says were cleared during the two-year period. Deforestation for oil palm plantations was disproportionately high in three provinces in Indonesia Borneo: West Kalimantan (75 percent of total deforestation was attributed to palm oil), East Kalimantan (55 percent), and Central Kalimantan (38 percent). 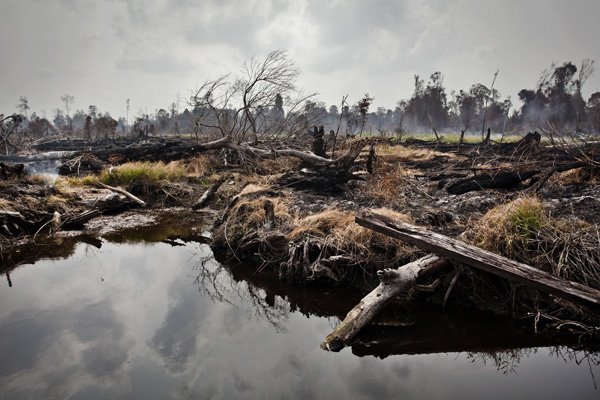 Charred tree stumps against the smoldering background in an area of recently deforested peatland near Tanjung Baru village, Pangkalan Kerinci subdistrict in Pelalawan regency, Riau province, Indonesia. The village lies beside PT. Pusaka Megah Bumi Nusantara (PMBN) – a palm oil company belonging to the Asian Agri group, a member of the Roundtable on Sustainable Palm Oil (RSPO). This area, according to the most recent official charts, is covered by the Indonesia government’s moratorium on the issuance of new permits in primary forests and peatlands.Thousands of peatland fires in the province – the majority within pulp and palm oil concessions – have caused record-breaking air pollution in Singapore and Malaysia, with the haze extending as far as Thailand. Taken June 29, 2013 © Ulet Ifansasti / Greenpeace

Worryingly for environmentalists, Greenpeace’s report suggests that RSPO member companies are falling short of the initiative’s goals. Notably, RSPO-certified companies continue to clear forest and peatlands for new plantations. And during the ongoing haze crisis, a large number of hotspots have been detected within their concessions.

“Concessions affiliated with RSPO members accounted for 39% of the fire hotspots on palm oil concessions in Riau during January-June 2013 – a total of 720 hotspots in RSPO-related concessions.”

The problem, says the activist group, is that while RSPO criteria prohibit conversion of old-growth and “high conservation value” (HCV) forest, they do not exclude clearing of secondary forests and peatlands for plantations. Because these areas lock large amounts of carbon in their soils, clearing vegetation and draining the water table can trigger substantial emissions. The RSPO sets no limits of emissions from palm oil production — emissions reporting is strictly voluntary.

“RSPO rules fail to prevent peatland and forest fires,” states the report. “The RSPO bans deliberate use of fire for land clearance, but it has failed to address the source of devastating fires in Sumatra in June 2013. The RSPO allows its members to clear rainforest and to clear and drain peatland. Drained peat is like a tinderbox: once dry, the dense, carbon-rich soil catches fire easily; once lit, it can spread rapidly.”

For its part, the RSPO says upon receiving complaints from Greenpeace, it investigated five members for alleged fires. It found that three registered hotspots, one of which — PT Jatim Jaya Perkasa — had dozens of fires.

“[PT Jatim Jaya Perkasa] has been escalated to a formal complaint case,” the RSPO told mongabay.com. “The other two companies with hotspots were advised to immediately appease the fires which were prevalent for less than 24 hours while it was confirmed that it was not due to systemic issues as they adopt a no burning policy, as directed by the RSPO. The RSPO continues to monitor this.”

“The discrepancy of the hotspots analysis is because the concession maps provided by Greenpeace differed from the maps which should be the accurate base for reference (HGU boundaries / Business Use Rights),” the body said. “The RSPO has advised Greenpeace several times on the use of incorrect reference maps and for stronger accountability towards reliable information in the public domain.” 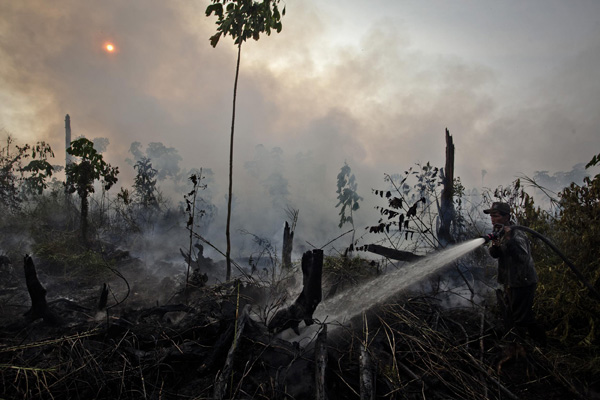 The Greenpeace report also criticizes what it terms laundering of palm oil from non-certified sources via the RSPO. It notes that RSPO-certified palm oil is rarely segregated from conventional palm oil. Worse, RSPO-members have been caught buying palm fruit from developers who have illegally cleared rainforests for plantations.

“Producers can be RSPO members without having any certified concessions. RSPO members can freely trade fresh fruit bunches (FFB) and oil produced by non-members who have made no sustainability commitments: some of the most prominent RSPO processor members, including IOI, Wilmar and Musim Mas, are heavily dependent on sourcing and trading FFB or palm oil products from third party suppliers,” says the report. “FFB from unlicensed plantations and areas cleared by fire can end up in mills belonging to RSPO members. A recent investigation by WWF Indonesia showed that mills, some RSPO certified, owned by RSPO members Wilmar and Asian Agri were receiving FFB from illegal plantations inside Tesso Nilo National Park as recently as 2012, though both companies now say they are introducing procedures to stop this.”

According to Greenpeace, many seemingly well-intentioned companies are sidestepping the issue by purchasing Greenpalm certificates, which effectively allow buyers to offset their conventional palm oil purchases with credits representing an equivalent volume of RSPO-certified palm oil. The initiative aims to serve as a bridge until segregated palm oil becomes more readily available. Until then, companies won’t know whether the palm oil they are using in their products is actually sourced under any social or environmental standards, which is at issue for Greenpeace.

But a more fundamental problem is consumers don’t seem willing to pay much of a premium for certified palm oil. Greenpalm certificates currently fetch a premium of 0.4 percent, far below the 10 percent sought when the first certified palm oil began shipping in 2008. The lack of a price premium is a disincentive for producers to bother with the costly certification process. Or for that matter, push to strengthen it. 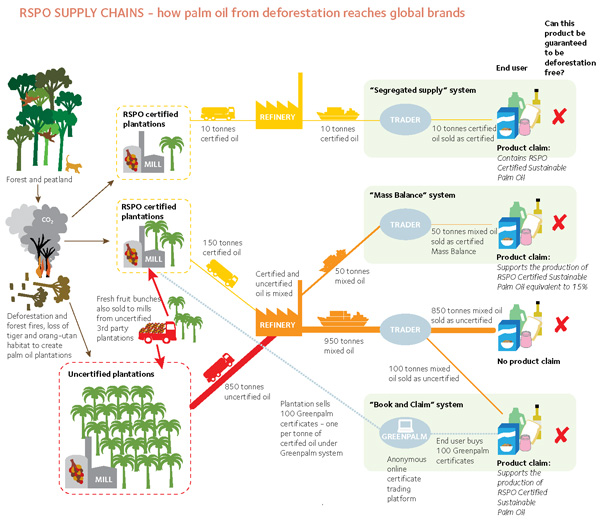 While Greenpeace’s report comes down hard on the RSPO, it stops short of calling for corporate customers to abandon the initiative. Instead the activist group asks buyers to “go beyond” RSPO standards and source from suppliers who have set the bar higher.

“The RSPO remains the largest inter-sectoral body, with a critical mass of membership among producers, traders and corporate consumers. While RSPO standards on forest conversion and on other areas such as land rights are clearly inadequate, they remain an important improvement over no standards at all,” the report states. “Hence, Greenpeace is not calling for companies to abandon the RSPO; rather, we call for them to go beyond RSPO standards.”

“Companies that have ‘gone beyond the RSPO’ and committed to policies to ensure forest protection include Golden Agri-Resources, New Britain Palm Oil and Agropalma, whose ‘no deforestation’ commitments demonstrate that a responsible palm oil sector is possible. Meanwhile, some consumer companies are setting standards for truly responsible purchasing policies. For example, Nestlé has made a clear commitment to break the link between palm oil and deforestation in its own supply chain.”

Greenpeace cites a new initiative, Palm Oil Innovation Group, as a potential model for companies wanting to move toward stricter standards. POIG, which currently involves a handful of NGO’s and “progressive” palm oil companies, will establish additional criteria to improve the social and environmental performance of palm oil, including “requirements on reserving enough land for local communities’ food crops, greenhouse gas emissions and no development on peatlands.”

Greenpeace says the RSPO should also move toward stronger standards, including banning conversion of peatlands and deforestation. The group calls on the RSPO to close some of the loopholes that allow companies to produce and trade un-certified palm oil while still operating under the banner of RSPO membership.

Greenpeace’s report comes at a challenging time for the palm oil industry, relative to recent boom. Slowing demand for palm oil has severely cut profit margins in the sector this year. Meanwhile planned expansion in tropical Africa, mainland Asia, and Latin America could usher in an era of oversupply in the near-term, further undercutting prices.

It’s unclear what impact these trends would have on demand for certified palm oil. Past gluts have led producers to walk away from marginal plantations and abandon plans for new development, potentially reducing pressure on forest lands. Whether this will increase interest in producing and sourcing premium RSPO-certified palm oil remains to be seen.

Nonetheless, in the short- to medium-term, palm oil production will likely continue to be a lucrative option relative to other forms of agriculture in the tropics, putting it in direct competition with forest preservation.