According to the Borneo Project and the Bruno Manser Fund, more than 100 Penan are blocking road traffic to protest for higher compensation from Sarawak Energy Berhad, the state-owned power company behind the Murum Hydro Electric Power dam. Having failed to stop the project, indigenous leaders are seeking bigger cash payments, more land, and a greater share of profits from the dam before they agree to move to a resettlement site at Metalon.

The Penan say they weren’t properly consulted before construction on the dam moved forward. Murum will flood about 24,000 hectares of forest and land traditionally used by the tribe. Sarawak Energy has offered 10,000 Malaysian Ringgit (roughly $3,000) and 14 hectares of land per family in compensation.

Murum is just one of a dozen large dams planned in Sarawak by 2020. The dams will flood vast areas of forest and force 20,000 from their traditional lands.

While the projected power projection far outstrips current local demand, Sarawak says it is building the dams to promote industrial development. But critics contend the projects are way to enrich politically-connected businessmen. For example, Sarawak Chief Minister Abdul Taib Mahmud is said to have squirreled away more than 15 billion dollars despite earning a civil servant’s salary since 1981 through ownership of a network of forestry, plantation, real estate, and construction companies. 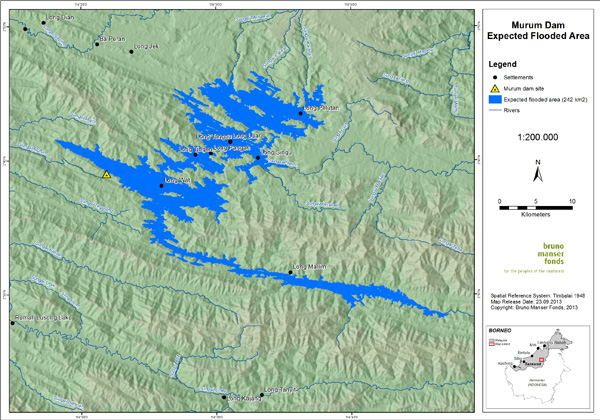