A recent study of forest in East Kalimantan, Borneo has found that orangutans travel on the ground far more often than expected.

The study, published in the American Journal of Primatology, was carried out in Wehea Forest involving the use of 78 camera traps across 38 square kilometres of forest. Previously, researchers have found that orangutans came down to the ground to forage for food or travel to other areas, but the new study aimed to monitor how often the Northeast Bornean orangutan subspecies (Pongo pygmaeus morio) travelled terrestrially.

There are three subspecies of Bornean orangutan, with the Northeastern species Pongo pygmaeus morio being subjected to the “most resource-scarce” and lowest quality area of forest. To overcome these obstacles, this orangutan subspecies has had to evolve both physically and in terms of its behavior. The Northeastern orangutan has more robust jaws, a smaller brain size and a shorter interval between births than its cousins. Bigger brains require more energy than smaller ones, so by living in an area where food availability may be unpredictable, the Northeastern orangutan brain size has become smaller. 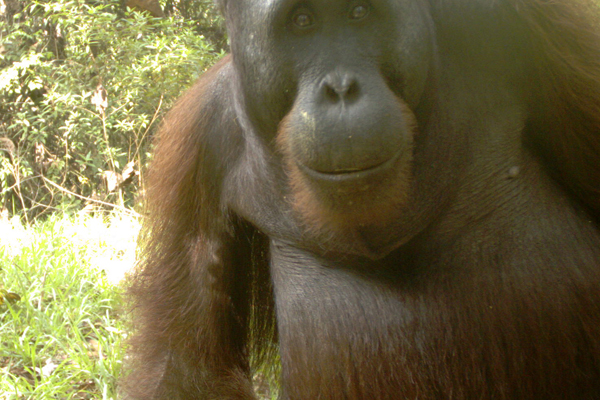 An adult orangutan closely inspects the camera trap from the ground. Photo courtesy of Brent Loken.

Camera trap were set up along abandoned logging trails and roads, which had been left long enough for the trails to become overgrown yet still remain accessible for the researchers (and the orangutans!) The great apes were photographed 110 times throughout the study—almost as often as the primarily terrestrial monkey, the pig-tailed macaque, which was recorded 113 times. By looking at the camera trap footage, the research team were able to identify the sex of the orangutans, as well as estimate their age. It was also possible for some individuals to be recognized, based on their body size, hair color and quality, prominence of brow ridges, marks and scars, or even body posture.

Terrestrial travel was thought to be mainly exhibited by flanged males—males with large cheek pouches—but males and females were observed around the same number of times. Females with juveniles were also captured traveling along the ground. According to the paper, these findings show that this “is not an occasional behavior employed only by certain classes of individual, but instead represents a regular strategy employed by individuals of all age-sex classes.”

The challenging environment and unpredictable food abundance in Wehea Forest and Northeastern Borneo in general means that traveling terrestrially may be more energy efficient than swinging through the trees. The large body size of orangutans means it takes a lot of energy to move arboreally, and in such a “resource-scarce” area, conserving energy is vital for survival. Terrestrial travel may also be increasing due to an ever more challenging habitat as human disturbance grows, including oil palm plantations and mining concessions. 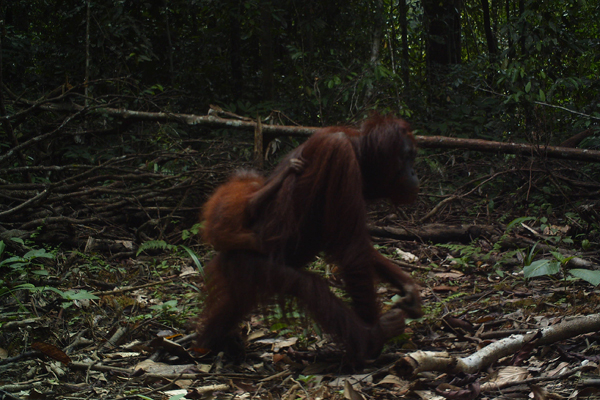 A baby clings to its mother as they walk along the leaf litter. Camera trap photo courtesy of Brent Loken.

“Increasingly, the islands of Borneo and Sumatra are becoming characterized by a matrix of timber plantations, agro-forestry areas, mines, and patches of natural forest,” lead author of the paper Brent Loken told mongabay.com, where “the greatest threat to orangutan populations continues to be the expansion of palm oil and coal mining.”

Created by burning and clearing large expanses of natural forest, oil palm plantations are having detrimental effects on orangutan populations. Individuals may become caught in the forest fires and perish, while those that survive have to adapt to an ever decreasing habitat. Orangutans are often seen in oil palm concessions traveling along the ground to feed on the young oil palm fruit. On these occasions they are usually shot and killed, or captured to become part of the illegal pet trade.

With threats to Bornean orangutans mounting, the IUCN Red List has listed them as Endangered, and their conservation is critical.

“If we want to protect orangutans, we need to develop strategies for managing whole landscapes including areas allocated to both production and protection,” Loken says. “It is crucial to incorporate these multi-functional landscapes into conservation planning.”

Wehea Forest was classed as a logging concession, however this concession is now inactive and logging stopped in the 1990s. Paperwork has recently been submitted to have the status of the forest changed to a Protection Forest.

Orangutans have demonstrated some flexibility in their behavior by traveling terrestrially through the fragmented habitat, and “it is possible, at least in some cases, that provided sufficient food exists, orangutans may be able to use mixed‐use landscapes that consist of natural and human altered habitats” Loken said. However, “it is shortsighted to focus only on protecting orangutans in places such as Wehea Forest and doing so may not ensure their long-term survival. Although forests such as Wehea should be the cornerstone on which regional conservation strategies are built, a more holistic and comprehensive conservation plan must be adopted… We are working closely with the timber companies that have concessions bordering Wehea and together we are committed to developing sustainable logging practices that will ensure the forest surrounding Wehea continues to be a healthy ecosystem which will support orangutan populations into the distant future.” 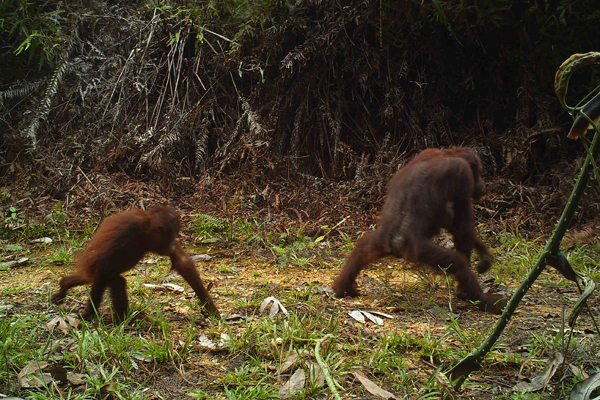 A juvenile follows its parent as they walk through the forest. Camera trap photo courtesy of Brent Loken. 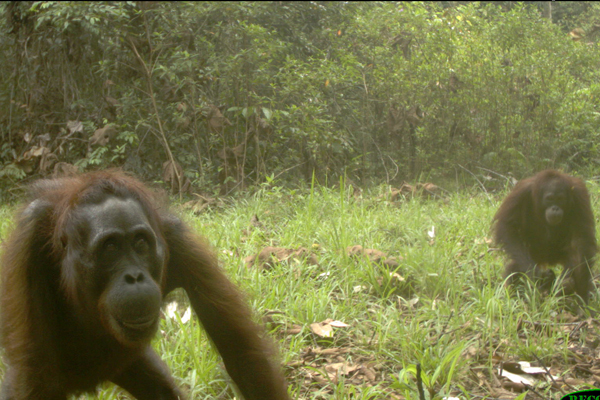 (07/02/2013) An orangutan in Indonesia’s Aceh province died last Thursday after being beaten by residents of a local village attempting to capture the animal. The case casts a tragic spotlight on what is becoming an increasingly serious problem in the region, as habitat decline and weak law enforcement leave wild orangutans at risk of being killed or captured and kept illegally as pets.

(04/10/2013) After facilitating large-scale logging and conversion of extensive areas of rainforest habitat, the government of Sarawak says it will protect a population of up to 200 of the world’s rarest Bornean orangutans recently identified during field surveys by conservationists, reports the Wildlife Conservation Society (WCS).