Iraq gets its first national park: just call it Eden

Late last month, the Iraqi Council of Ministers approved the nation’s first national park: the Mesopotamian marshes, which some scholars believe were the site of the historical Garden of Eden. The establishment of the park is a major milestone for a nation still plagued by violence with the park itself linked to the ravages of the Saddam Hussein regime.

Portions of the marshes were drained beginning in the 1950s for agriculture and oil, however Saddam Hussein drained the vast majority of the marshes in order to evict the Ma’dan Marsh Arab people that had depended on the wetlands for their livelihoods for thousands of years. By the time Saddam fell only around 8 percent of the marshes remained.

The efforts to restore the marshes were spearheaded by Azzam Alwash, founder of the NGO Nature Iraq. Alwash left Iraq for the U.S. during the rule of Saddam Hussein, but returned 2003 after Hussein’s regime was toppled. He spent the next ten works working tirelessly to restore the drained marshlands and has since been given the Goldman Prize for his environmental work (often described as the ‘Green Oscar’).

“With this action, Iraq has acted to preserve the cradle of civilization,” said Alwash. “It is now the duty of the world to help Iraq maintain these wetlands for the future generations by helping Iraq, Turkey, Syria and Iran to reach an equitable agreement on the sharing of the waters in the basin of the Tigris and Euphrates.”

The marshes are home to dozens of bird species and were once was a major stopover for migrating birds. While some of the area has recovered completely, other parts are suffering from drought and dam projects in other countries.

“Originally there would have been 70-120 million cubic meters of water flowing through the marshes a year. Today it is just 60m. But we think [as more dams are built and water is siphoned off upstream in cities] that eventually it will be around 40m cu meters. The water flow is progressively getting worse and there has been no flood since Syria and Turkey built their dams,” Alwash told the Guardian earlier this year. “If we do nothing, then agriculture will die in the land where it was born within 25 years.” 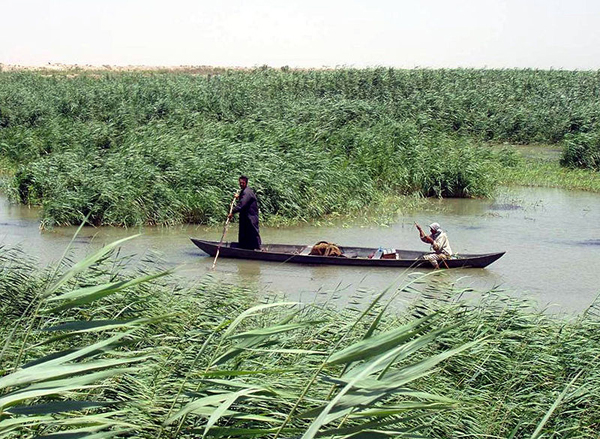 (04/16/2013) The vast Mesoptomian marshes in southern Iraq were said to be the site of the original Garden of Eden. On their fringes have risen and fallen 12,000 years of Sumerian, Assyrian, Chaldean, Persian and Arab civilizations. Organized farming is thought to have begun here, as did the first cities and writing. In legend, Gilgamesh fell asleep on the water side and let slip from his fingers the plant of eternal youth. Abraham was said to have been born here and explorers like Sir Wilfred Thesiger made their name here.

Syrian bald ibis may be down to a single bird

(06/11/2013) The eastern population of northern bald ibises (Geronticus eremita) has likely fallen to a single breeding bird, reports conservationists monitoring the dwindling flock. The population had believed to be obliterated starting from 1989 until a small group was discovered in 2002 in Syria. However, it now appears that this last group is vanishing one-by-one despite efforts by conservation groups to sustain the distinct population.

(02/26/2013) Cheetahs (Acinonyx jubatus) are unique among large cats. They have a highly specialized body, a mild temperament, and are the fastest living animals on land. Acinonyx jubatus venaticus, the Asiatic subspecies, is unique among cheetahs and the only member of five currently living subspecies to occur outside of Africa. Listed as Critically Endangered on the IUCN Red List—with a population of between 70 and 100 individuals—the Asiatic cheetah is one of the rarest felines on the planet. But new proposed road through one of its last habitat strongholds may threaten the cat even further.

(01/14/2013) Today most people are more likely to associate Yemen with warfare and bizarre terrorism plots rather than wildlife. But Yemen is home to a surprising diversity of animals, including a population of the world’s smallest leopard: The Arabian leopard (Panthera pardus nimr). Native to the Arabian Peninsula, the Arabian leopard is today extremely rare — less than 200 animals are thought to survive in the wild. Despite the cat’s precarious position, there is relatively little local enthusiasm to protect a species that is widely seen as a threat to livestock. Nevertheless one man in Yemen is trying to boost the value of leopard in the eyes of local people. David Stanton, an American teacher living in Yemen, had devoted his life to saving the Arabian leopard.