For a young wild sloth bear who found himself amidst a panic-stricken village in India, rescue was fortunately, and surprisingly, close at hand. In a one-of-a-kind heartwarming story, a team from Wildlife SOS (WSOS) India – a conservation and welfare NGO – successfully rescued, treated and subsequently released the sloth bear back into the wild, but this time with a radio collar fitted around its neck.

“This is the first time ever that a sloth bear rescued from a situation like this has been radio collared and released back in the wild,” says Kartick Satyanarayan, CEO and Co-Founder of WSOS.

In May this year, Dr Ilayaraja, a WSOS veterinarian, was alerted when a young wild male sloth bear was spotted in a village near Shikohabad in Uttar Pradesh (UP), India. The villagers, unnerved by the bear, attempted to chase it away by pelting stones at it. When the WSOS team arrived at the scene to rescue the distressed and visibly exhausted bear, they found that the petrified four-year old bear had retreated into the safety of a 40 feet long storm drainpipe. In fact during the rescue, the bear almost attacked a team member. After tranquilizing him, they transported him to the WSOS Agra Bear Rescue Facility where he was housed in a special quarantined enclosure and taken care of.

Eight weeks later, the bear was radio-collared by a team of five WSOS veterinarians and four researchers, and released into Suhelwa Wildlife Sanctuary (WLS) in Uttar Pradesh on the 4th of July. But what they witnessed was rather unexpected.

“We were all expecting the bear to come out and sniff around, establish his bearings before going into the forest,” said Kartick, “But the bear could not wait to be out. Even before the transport crate could be fully opened, the bear shot out like a rocket and disappeared into the forest in less than 4 to 5 seconds! It was one of the fastest releases we have ever witnessed!”

Suhelwa WLS, the site selected for release, is a narrow strip of forest about 120 km in length and 5-8 km wide. It lies at the Indo-Nepal border and forms a vital part of the Terai Arc Landscape – one of the most important tiger habitats in India. It was selected following recommendations by the Chief Wildlife Warden of the UP Forest Department, Dr Rupak Dey, and an assessment by the WSOS team, which found it to have a suitable protected habitat for the bear.

More than 80% of the world’s sloth bears (Melursus ursinus) are in India. The shy and secretive bear, which feeds mainly on ants and termites, and occasional fleshy fruits, is also feared for its aggressiveness. Direct retaliatory killing by humans, habitat destruction and degradation, as well as poaching for gall bladder, claws, skin, and bones are some threats the bear faces. The declining bear population now increasingly occurs in fragmented and isolated forest patches within human-dominated landscapes. It has even become locally extinct in some forest areas in India, and is currently listed as Vulnerable by the IUCN Red List.

The radio-collaring of the rescued bear is a big step forward in scientific management of human-bear conflict in India. Together with the UP Forest Department, the team intends to develop strategies that will minimize this conflict. Tracking the bear will help better understand its behavior, ranging patterns, habitat use and skirmishes with humans, if any. It could also help in planning future bear translocations, the team added.

The young sloth bear which probably travelled more than 100 km to reach the village according to the team, has been doing well so far within Suhelwa WLS, steering clear of all human habitations true to its shy nature.

“This confirms that the bear remains very scared of human presence and is doing everything he can to avoid it”, said Kartick. The team plans to follow the bear’s journey for the next 2-3 years hoping to discover exciting insights into his life. 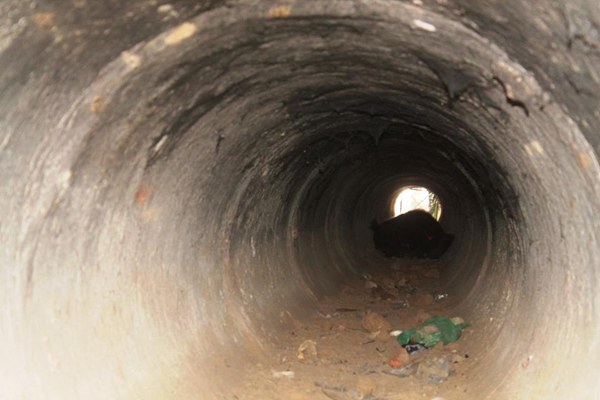 The bear in the storm drain. Photo courtesy of Wildlife SOS. 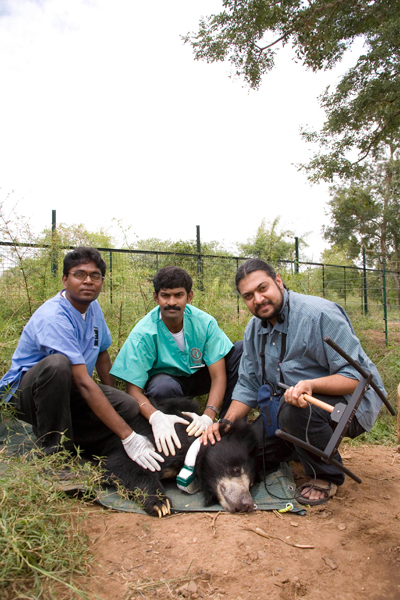 The team and their charge. Photo courtesy of Wildlife SOS.