Barack Obama launched a new initiative against wildlife trafficking on Monday, using his executive authority to take action against an illegal trade that is fueling rebel wars and now threatens the survival of elephants and rhinoceroses.

The initiative, announced as the president visited Tanzania on the final stop of his African tour, was the second time in a week Obama has used an executive order to advance environmental policy, after announcing a sweeping new climate change plan.

Monday’s executive order would set up a presidential task force to draw up a new strategy for cracking down on the criminal gangs behind the explosion in trafficking, as well as choke off demand for elephant ivory, rhino tusk and other animal parts.

Estimates by conservation groups suggest the illegal trade in wildlife is worth up to $10bn a year.

The executive order called for $10m to train police officers and park rangers.

The measures outlined in the executive order issued on Monday expands on existing American efforts to help countries in Africa fight off organized criminal gangs behind the poaching networks.

Within the last few months, the State Department and the United Nations have both declared wildlife trafficking as a security threat. “As we see criminal networks getting increasingly involved—you see poachers with night vision goggles and high-powered rifles—you also see some rebel militias trading in ivory and rhinoceros horn as source of currency and value,” Grant Harris, the state department’s Africa director, told reporters traveling with Obama.

“It’s degrading good governance, because this is fueling corruption and money laundering.” 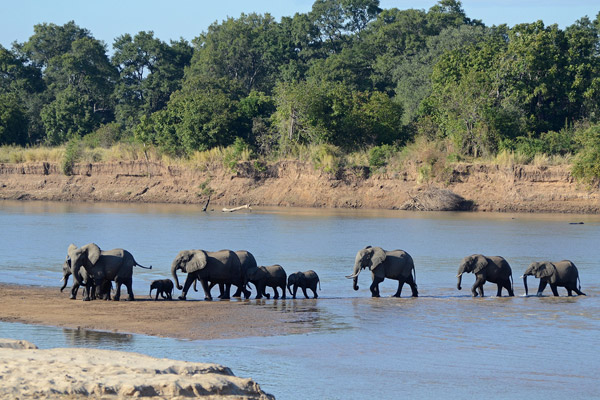 The $10m announced on Monday would provide training for police and park rangers in Tanzania, South Africa, Kenya and other countries, the officials on Obama’s plane said.

The executive order signed by Obama also established a presidential task force charged with drafting a new strategy for cracking down on poachers, and choking off demand for their products.

America is a major market for trafficked wildlife, after China and Vietnam.

White House officials said the task force would also be looking at how to use existing organized crime laws to fight poachers.

The executive order said wildlife trafficking had reached crisis proportions in recent years, driven by the involvement of organized crime gangs, and now presented a direct threat to the stability and security of countries in the region.

“The survival of protected wildlife species such as elephants, rhinos, great apes, tigers, sharks, tuna and turtles has beneficial economic, social, and environmental impacts that are important to all nations. Wildlife trafficking reduces those benefits while generating billions of dollars in illicit revenues each year, contributing to the illegal economy, fueling instability, and undermining security.”

The United Nations in a finding earlier this year said that profits from the illegal ivory trade were funding were funding rebel groups in Central Africa.

The initiative won praise from conservation groups who have despaired at the explosion of wildlife trafficking over the last decade.

Carter Roberts, president of the World Wildlife Fund, said the move by Obama would provide a “critical boost” to efforts to stop the traffickers.

Authorities nab ringleader of poachers who killed 89 elephants in Chad

(06/27/2013) During one night in March, horse-riding poachers slaughtered 89 elephants in Chad, including over 30 pregnant mothers. Now officials say they have caught the ringleader behind the mass-killing: Hassan Idriss, also known as Gargaf.

(06/05/2013) The Lord’s Resistance Army (LRA) is using lucrative elephant poaching for ivory to fund its activities, according to a report published on Tuesday. Eyewitness accounts from park rangers, Lord’s Resistance Army (LRA) escapees and recent senior defectors report that the fugitive warlord Joseph Kony, who is wanted by the international criminal court for war crimes and crimes against humanity, ordered African forest elephants to be killed in Garamba national park in the Democratic Republic of Congo (DRC) and the tusks sent to him.