Nature preserves, wildlife sanctuaries, national forests, parks, grasslands and protected areas are the cornerstones of conservation. These are the wild places where animals can still dwell, grow, and reproduce in their natural environment without any human-caused stressors. While many of these special places have facilitated leaps and bounds for wildlife conservation, the reality is that these areas are extremely limited and most plants and animals live beyond, or must migrate out of, their bounds.

Animals have a host of stressors that have to be overcome on a daily basis—finding enough food and water, avoiding predation, competing for mates, raising young, battling for hierarchy, surviving drought, parasites, and injuries, etc. But in addition to these daily pressures, animals living outside protected areas have to contend with humans in a shared landscape. Rural, human-inhabited areas are often outfitted with livestock and agriculture, and wild animals that live in these areas are subject to interacting with humans and domestic animals–leading to potentially stressful events.

An increasingly-popular conservation strategy is that of community conservation areas (CCAs) where locals are encouraged to manage their land in a wildlife-friendly capacity that allows for peaceful co-existence between people and animals. This is a great idea, in theory. 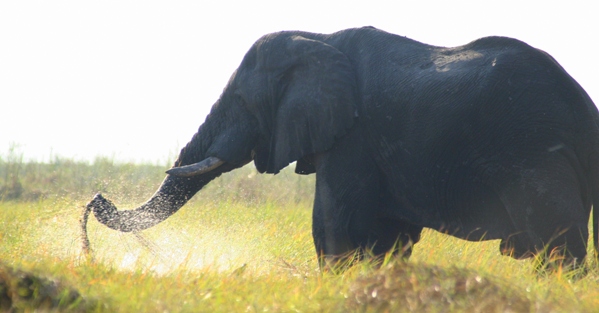 But conservationists trying to save populations of wild animals need to know if animals living outside protected areas have a realistic chance of surviving in these theoretical utopias. So scientists at the Nature Conservancy and the Smithsonian Institution paired up to explore whether anthropogenic (human-related) exposure was having a negative effect on wildlife using African elephants (Loxodonta africana) in Kenya as their platform.

African elephants are a hearty, long-lived mammal. They travel over long distances, have large home ranges, and require large areas of open land to maintain viable populations, often putting them in contact with rural people and livestock in Kenya. 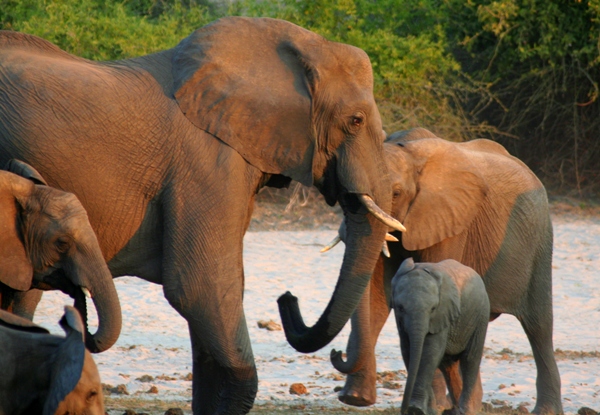 A herd by the river in the evening. Photo by Tiffany Roufs.

Researchers measured levels of fecal glucocorticoid metabolite (FGM), a stress-detection hormone in mammals, in the elephant dung. Examining levels of the FGM hormone in elephants is a good indicator as to whether they are experiencing high loads of stress.

A single glance at FGM levels is a snapshot in time and can only tell so much about the stress an animal may or may not be experiencing. As Marissa Ahlering, the primary investigator on the project, explains, “elevated levels of glucocorticoids can be adaptive in the short term and do not necessarily constitute stress.“ But changes or elevation in levels of these hormones over time can have major implications on an animals’ fitness, which is directly proportional to its ability to survive.

Ahlering and colleagues discovered that animals living in the CCA did not have elevated FGM levels compared to elephants in the Maasi Mara or Amboseli Parks, on the whole. There were some significant differences between animals within areas, and this is likely due to a variety of environmental factors at a local scale.
“Elephants seem to be able to perceive danger or risk and if they are in a more hostile landscape I would imagine this would cause elevated stress levels,“ Ahlering explains.

Overall the results, published in Conservation Biology, indicate that under a set of normal circumstances, elephants living in human-inhabited, agricultural landscapes were not experiencing detectable amounts of stress. And aside from specific, intense stress events (poaching, crop raiding, etc.) elephants living with humans in the Maasi community seem to be coping well.

This news bodes well for most conservationists. It means that populations of wild animals dwelling in human-inhabited areas might have a realistic chance of being successful.

Some conservationists, however, are wary. If elephants are that comfortable living in close proximity to humans, will it make them less wild or habituated to humans? Ahlering doesn’t think so.

“For me the broader implications of our results is really just that it is possible that elephants can live outside traditional protected areas in heavily human-dominated landscapes without experiencing stress levels (or the negative fitness consequences that would go along with that) any different from what they experience in the parks,“ she notes.

Ahlering says that even in parks, elephants remained elusive and shied away from humans. She tells mongabay.com that “these results don’t give us the answers for how people and elephants can best co-exist…all these results say is that in some situations it is possible for elephants to live among people without the negative fitness consequences associated with stressful situations.“

People and elephants living together can be dangerous. In a mere couple of hours, elephants can devastate an agricultural operation by taking crops, trampling plants and trees, and disrupting the landscape. Animals experiencing high levels of human pressure have been known to attack people, especially when they are being harassed. Many elephants are killed each year by disgruntled farmers whose livelihoods are affected by elephant damage.