The research involved analysis of carbon released from forest management practices in the northeastern United States. It found that while most models assume carbon stored in mineral soils to be relatively stable, in fact intensive logging operations, like clear-cutting, trigger release of carbon from various pools above and below ground.

“Our paper suggests the carbon in the mineral soil may change more rapidly, and result in increases in atmospheric carbon dioxide, as a result of disturbances such as logging,” said Dartmouth Professor Andrew Friedland, a co-author on the paper. “Analysis of forest carbon cycles is central to understanding and mitigating climate change, and understanding forest carbon cycles requires an in-depth analysis of the storage in and fluxes among different forest carbon pools, which include aboveground live and dead biomass, as well as the belowground organic soil horizon, mineral soil horizon and roots.” 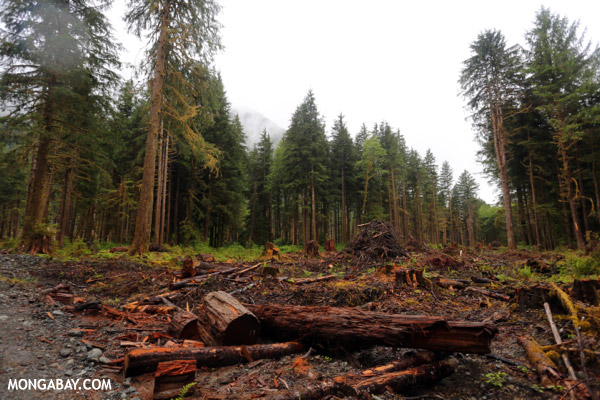 Logging in the Pacific Northwest. Photo by Rhett A. Butler

Friedland and colleagues argue that the results suggest efforts to reduce greenhouse gas emissions by using wood fuel for energy could be less effective than originally envisioned.

“Our paper suggests that increased reliance on wood may have the unintended effect of increasing the transfer of carbon from the mineral soil to the atmosphere,” Friedland said. “So the intended goal of reducing carbon in the atmosphere may not be met.”

(06/06/2013) In order to meet the European Union’s goal of 20% renewables by 2020, some European utility companies are moving away from coal and replacing it with wood pellet fuel. The idea is simple: trees will regrow and recapture the carbon released in the burning of wood pellets, making the process supposedly carbon-neutral. But just like other simple ideas, it misses out important details that can turn it on its head.

Deforestation, wetlands loss in Brazil and Indonesia generated 45b tons of CO2 in 20 years

(02/22/2013) The United Nations Food and Agriculture Organization (FAO) has launched a global set of statistics on carbon emissions from deforestation, agriculture and other forms of land use for the 1990-2010 period.

(01/31/2013) Degradation of peat swamps for oil palm and timber plantations is a substantially larger source of greenhouse gas emissions than previously believed, finds a new study published in the journal Nature.