Cortolima, the environmental authority of the department of Tolima in central Colombia, stopped AngloGold from conducting unsanctioned exploration activities in the Tolima municipality of Piedras in March. The mining giant had been caught drilling down into an agriculturally important aquifer that it hopes to use as part of the cyanide leaching process for its La Colosa Mine, approximately 100 kilometers away in the mountainous municipality of Cajamarca.

The mining company responded on May 8th by demanding the disciplining of Cardoso and Cortolima’s chief legal officer José Francisco Montufar, claiming that Cortolima had abused the precautionary principle, based its ruling on false data, and ignored information the company submitted in advance. They also threatened to pursue legal actions against the environmental authority.

The country’s Comptroller Sandra Morelli is responsible for monitoring national resources, and her Deputy Mauricio Cabrera Leal visited Piedras and the La Colosa Mine on May 30th and 31st. Cabrera Leal ruled that Cortolima’s suspension of AngloGold’s activities had been conducted according to the law and in fulfillment of the body’s responsibilities.

AngloGold projects that La Colosa will become the largest goldmine in Latin America, but the company has failed to secure water access near the site for the cyanide leeching process that separates gold from quarried rock. The project’s planners intend to transport ground stone from the mine in a 98 kilometers ‘mineroduct’ pipeline to land it has secured near Piedras village of Doima. Their property lies just upstream of the meeting point of the Doima and Camao Rivers, whose hydrology the company was caught illegally altering, and above the environmentally fragile aquifer of Piedras, which AngloGold was found to be illegally exploring. 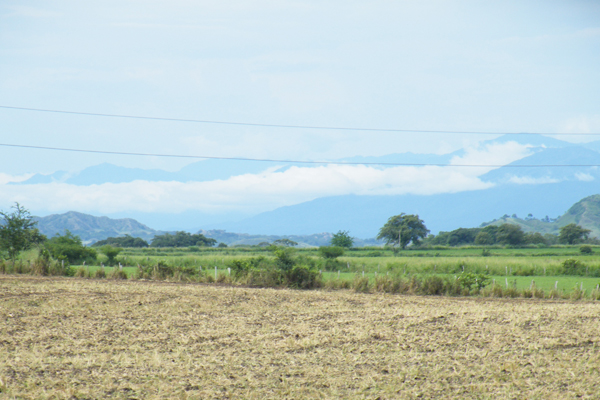 The territory of Piedras is characterised by large fields used for rice and pasture, and stretches of palm and broad-leafed forest. Photo by: Robin Llewellyn.

The waters of the Doima and Camao then flow into the Rio Opia that passes through the village of Doima itself, as does the access road to the company’s property. In January villagers blocked this route to AngloGold, and homes and businesses in the area displayed banners opposing the leeching project. The company responded by asking a local judge to suspend Mayor of Piedras, Artimides Avila, for not removing the blockades and ensuring the freedom of movement of their employees.

A vigil of local people remains in place at the entrance to the village, with unfamiliar cars stopped and their drivers questioned. The demonstrators say no company activities have been observed since Cortolima’s order against AngloGold, but mounted police that Tolima’s governor ordered into the village remain in place.

According to the company’s communications officer Chris Nthite: “The Mayor of Piedras was, therefore, requested to guarantee freedom of movement as it is the municipality’s constitutional duty. However, following the failure to deliver on this request, we were left with no option but to file the constitutional request with the local judge.”

The Mayor of Piedras is reportedly preparing to hold a referendum on whether to ban mining from the municipality altogether, a vote expected to be held in September. Referenda and municipal bans on mining have occurred elsewhere in Colombia, with the entire sub-region of Southwest Antioquia reportedly moving towards voting against mining.

In response, however, the central government passed Decree 934 on May 9th, declaring that local referenda and municipal bans have no legal validity, as mining is the under the authority of the central government. The claim will be tested at the Constitutional Court in the coming three months by the City of Bogota, which has pointed to Constitutional Article 313 that empowers municipal councils to protect their ecological heritage. The city’s authorities claim that “under the Constitution and law, local authorities including the capital district have an autonomous status allowing them to make policy determinations as recognized by the Constitutional Court, without it being possible to limit that power by executive order to favor particular interests such as mining.”

Colombian mining legislation is currently in a state of confusion, with the Mining Code of 2010 (Law 1382) having been ruled unconstitutional because it was developed without consulting the country’s indigenous and Afro-Colombian peoples. The prior mining code of 2001 therefore remains in place (also developed without indigenous/Afro-Colombian consultations), and the weakness of its conditions for securing concessions has been blamed by environmentalists for the avalanche of exploration concessions and poor oversight that have affected the sector over recent years.

The 2001 Mining Code (Law 685) bans mining in páramos (high alpine ecosystems characterized by rich biodiversity and a strategic role in the water cycle, 60% of which are located in Colombia) but mining interests have said that the boundaries of the páramos have not been established, a claim disputed by environmentalists. Mining exploration has also persisted on indigenous territories despite Colombia’s ratification of ILO Convention 169 on the rights of indigenous peoples to be consulted over activities on their lands.

Amid this regulatory confusion, local disputes are witnessing increasing political mobilization: the governor of Tolima Luis Carlos Delgado Peñon responded to AngloGold’s demand for the disciplining of Cortolima’s officers by immediately releasing a statement defending the environmental authority. The following day 33 civil society organizations jointly released a statement drawing attention to the Constitutional Article 79: “All people have a right to a clean environment. The law guarantees the participation of the community in the decisions which can affect them.”

Environmental lawyer Juan Ceballos has worked with communities facing mining projects throughout Colombia, and sees a widespread movement towards applying the Constitution’s articles to environmental questions.

“The Constitution is the norm of norms”, he says, and the current administration, by pursuing a centralist mining policy that ignores the federal nature of the 1991 Constitution, “is an unconstitutional government.”

On Monday June 17th, Colombian parliamentarian Iván Cepeda urged national Minister of Mines and Energy Federico Renjife to suspend licenses granted to AngloGold using the precautionary principle to avoid irreparable damage to the country’s ecosystems. As well as referring to the penetration of the aquifer in Piedras, and the company’s altering of the Camao River in violation of the Natural Resources Code, Cepeda said AngloGold has conducted illegal explorations in forest reserves in Cajamarca. He called for the company to give up all titles it holds in national parks, and accused AngloGold of intimidating public servants whose roles can impact the company’s interests.

AngloGold says it will continue to prosecute Cortolima, and insisted that no illegal activities were conducted at its Piedras property. Tatiana Rodríguez of CENSAT/Friends of the Earth Colombia says: “it’s highly probable that they will take legal action because they don’t like to admit that they did anything wrong. They will take some action to try to clean their image, but I don’t think they can stop the action of Cortolima.”

Uncertainties of public policies to the mining sector have been blamed by some commentators for a slight decrease in direct foreign investment in Colombian mining, which fell 4% from 2011 to the end of 2012. According to Rodríguez, however, the regulatory environment is not characterized by a lack of clarity in laws, but also an inconsistency in their application across the country that encourages irresponsible companies to ignore regulations.

The villagers of Doima are therefore one community among others (such as the citizens of Bogota and a range of towns across Colombia which passed bans on mining) awaiting cases that will test the authority of state environmental bodies, and determine the validity of the central government’s May decree against local moratoriums on mining.